Movie Review (TIFF 21): Overlong ‘Benediction’ Wanders, But is Saved by Its Moving Screenplay and Central Performance 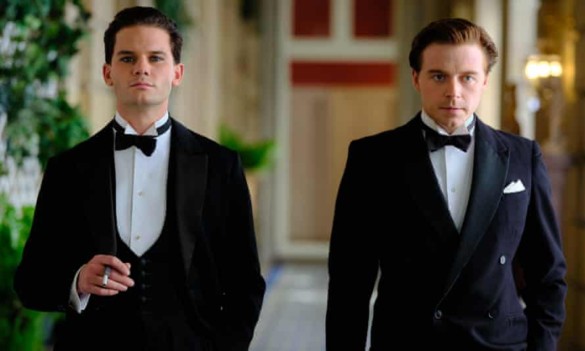 While World War II has received the lion’s share of Hollywood attention, more and more films are now telling stories from World War I, the conflict which engulfed the world from 1914 to 1918. The heroism and sacrifice from The Great War cannot be overstated and it’s good to see recent examples of filmmakers delving into this important period of history. Producer Peter Jackson’s documentary from 2018, They Shall Not Grow Old, featured never-before-seen footage from the trenches, and Sam Mendes’ 2019 Oscar-winning masterpiece, 1917, was dedicated to his grandfather, who enlisted as a 17-year-old and fought in the “war to end all wars.” And now, writer/director Terence Davies gives us Benediction, the stream-of-consciousness biography of famous English soldier/poet, Siegfried Sassoon, who was decorated for bravery while fighting on the Western Front, but later became an outspoken critic of the war, haunted by the devastation and death he witnessed first-hand.

Benediction is a beautifully-rendered, elegant, and very English journey through the life and mind of a conflicted and tortured man, played in youth by Jack Lowden, and in old age by Peter Capaldi. After getting injured early in the war, Sassoon swears he will never go back, even after he heals. He writes a scathing poem about the insanity of the war, hoping for it to be published, but friends in high places rescue him from a court martialing instead, pulling strings to get him sent to a psychiatric hospital. Never able to forgive himself for not standing up to those who protected him, Sassoon spends the rest of his life drowning in guilt, ashamed of not having done more to speak up or act out.

It is Sassoon’s passivity in his own life that is the central theme of Benediction, as life continues to be something that happens to him, not because of him. His trauma from his experiences in the war, along with his deeply mournful guilt over those close to him who were lost dominate every waking moment, as recurring nightmares and fraught daydreams often return him to the battlefield, graphically re-living the horrors. Davies shows little restraint in depicting the horrors of war, intercutting real footage from the war throughout the film, with graphic images of death bringing the audience directly into Sassoon’s nightmares.

But there is an elegance in Benediction as well, as Davies counteracts the brutality of war with beautiful, languid, and visually stunning shots, reflecting the inner conflict of Sassoon, an upper-class, well-connected, well-educated member of high society who is, in fact, still wallowing in the mud and blood of the trenches. The cinematography by Nicola Daley is gorgeous and effective, with tricks of the camera and imagery working well to keep the audience engaged with Sassoon’s inner turmoil.

The first third of the film is a raging anti-war manifesto, with Sassoon’s poetry serving as voiceover narration to the graphic images. While the images are disturbing, the words are transcendent, Sassoon’s powerful poetry deeply soulful in its imagery and achingly emotional in its depth. He is able to capture the horrors of war with a delicacy and trauma, a brutal beauty that weeps with knowing regret. Sassoon’s post-war experiences and poetic rebellion that opens the film is the strongest part of Benediction, with Lowden absolutely magnificent as Sassoon, determined and pained, aching for the strength to be able to do anything more than rage against he dying of the light.

But the film starts to lose steam once the films moves further away from the war and into the decadence of the 1920s, a decadence even more self-fulfilling in Sassoon’s world of high society, filled with artists, bohemians, and ladies of leisure. Sassoon has come to accept his homosexuality and ends up falling in love over and over again, always with someone who treats him badly, something he somehow feels he deserves—or at least doesn’t argue against. Once Sassoon loses a sense of who he is, so does the audience, his tragic romances further distancing us from the determined and courageous man we knew earlier. Even though it is guilt and shame that shape Sassoon in later years, the depiction of his mean-spirited lovers who spout nothing but pithy contempt for him feels lazy and disingenuous. The hard-heartedness is a bit over-the-top, especially as played by Jeremy Irvine, who portrays Sassoon’s most callous lover, the famous musician Ivor Novello, who is almost cartoonish in his bitchiness.

The film manages to emerge from the pointless dreariness of Sassoon’s gay shame spiral to the final section of the film, which features Capaldi as the older Sassoon, who is now angry, bitter, and resentful towards the world—but mostly towards himself. Having been constantly looking for answers in something or someone else, he contemplates converting to Catholicism to help find forgiveness, but he knows, deep down, that he will never be able to forgive himself for the fact that he believes he didn’t do enough against the war. It is a hard thing, to watch a man look back on his life with regret and pain, and Capaldi’s performance is raw and heartbreaking.

But it is Lowden’s performance and Davies’ screenplay that truly keep Benediction alive, even in its weaker moments. Lowden is engaging in every scene, able to keep Sassoon’s simmering rage and crippling sorrow always in the forefront, as Sassoon’s sadness is an ever-present cloud that colors every moment. Lowden is at his absolute best when he is speaking the words on the page, both from Davies’ script or straight from Sassoon’s real poems. The screenplay is magnificent, in spite of the nastiness of some of it, the dialogue is crisp and succinct, colorful and majestic. Not a word is wasted or unnecessary.

While Benediction does lose its way in the middle and is too long, the screenplay and performances honor the intended themes and purpose of the filmmakers and do right by the memory of those who perished in World War I, while bringing to light the work of a poet whose perceived failures belie his genuine successes.