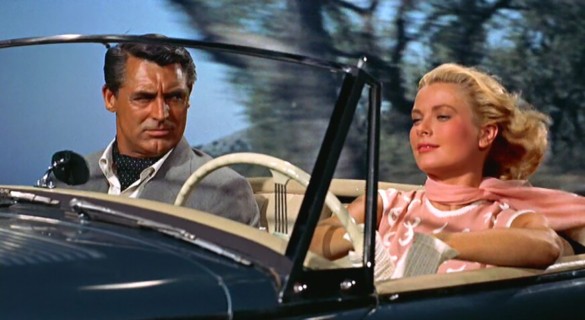 To Catch a Thief (1955) is one of Alfred Hitchcock’s lighter thrillers and it places more emphasis on shots of attractive locales in the South of France than it does on its convoluted plot. In theory, this should have allowed Hitchcock’s strengths to come to the fore. He is a filmmaker who values visuals above all else and his films often feel like triumphs of style over substance. He can conjure up a mood and an atmosphere like few other directors, and you have to be willing to overlook the fact that his films have fairly ludicrous plots and he isn’t that interested in realistically developing characters. When Ingrid Bergman and Gregory Peck have to fall in love in Spellbound (1945), we learn about it through Bergman declaring that she loves him, rather than having this idea communicated to us in such a blunt manner. To Catch a Thief is less interested in hitting plot beats or staging massive set pieces. By Hitchcock’s standards, it’s practically a character study.

His frequent collaborator John Michael Hayes wrote the script and he gives it the same lackadaisical air that clung to their other collaborations. The protagonist is supposedly fighting for his life, and his reputation, but he has plenty of time to sit on a picnic blanket with a pretty girl and express his ambivalence about settling down with her. This time, he also brings Cary Grant into the loop and has him play John Robie, a geriatric socialite who used to be an infamous cat burglar. He sets the story in the French Riviera and uses the idea of a new burglar framing Robie for his crimes by using all of Robie’s trademarks. This gives Robie an excuse to visit various exotic locations, and to meet American tourist Frances Stevens (Grace Kelly). Stevens is strongly attracted to him and their burgeoning romance complicates his plans to track down the thief who is imitating him.

Hitchcock gives up on the idea of being the master of suspense and provides us with scenes of ‘romance’ that are meant to be pleasurable because they are filled with spectacle. Hayes doesn’t rise to the level of Preston Sturges or Samson Raphaelson when it comes to giving Kelly and Grant a witty repartee to work with. Kelly is stuck playing off of her trademark cool hauteur and Grant is icy, asexual and thoroughly disagreeable. Robie is written and played as the sort of crotchety old man that would rant about reverse racism, but he is treated like a hot young stud who could charm the pants off of anybody. The dissonance between the charisma vacuum that is Grant, and the treatment that he receives, is almost fascinating to take in.

The screenplay also attempts to convince you that there’s a love/hate relationship between Stevens and Robie, without providing you with any evidence for this dynamic existing. Kelly goes from looking mildly bored while conversing with her mother’s friends at a dinner party, to passionately kissing a man who looks an acts like an ornery grandfather. If this weren’t an Alfred Hitchcock film that was made in the 1950s, I would not have expected their relationship to develop the way it is. Because To Catch a Thief exists within the world of Hitchcock’s travelogue films, absolutely nothing makes sense and he puts in no effort to direct the actors to at least pretend that they’re in the same room when their chemistry is supposed to be developing.

For films that are this light on plot, tension or momentum to work, the acting needs to be stellar and the visuals need to take your breath away. In the first case, Grant and Kelly are both disappointingly flat and unappealing. I simply don’t understand Grant’s appeal, as he is physically unattractive and doesn’t even get to show off his relatively limited comedic talent in this role. When it comes to Kelly, this feels like a retread of ground that she had already covered in her remarkably short career. She’s a spoiled little rich girl who suffers from frigidity before being shaken out of her torpor by the thrill of getting involved in an adventure. She was often used as a fantasy girl for elderly men who wanted to believe that a beautiful sophisticate would still go for them, but Rear Window (1954) used her persona in a creative way. She was finding ways to introduce more humor into some of her roles in serious thrillers and avoided becoming a simple clothes hanger. Both actors turn into dollar store versions of themselves when given roles that don’t challenge them in the slightest.

In the second case, there is one aspect of the visuals that does deserve a considerable amount of praise. Edith Head is widely viewed as one of the greatest costume designers of all time, and some of her best work is on display in To Catch a Thief. Kelly has a stunning figure and was blessed with good looks, but Head finds a way to enhance what is already there. There’s a high likelihood that most people imagine Kelly in that strapless white gown when they imagine the ideal woman. Head values a less is more approach when it comes to Kelly’s dresses, but they’re so perfectly suited to her alone that they end up looking one of a kind. She embodies the ‘Hot Girl Summer’ aesthetic and one wonders how amazing this film would have been if everybody had been working at Head’s level.

If you’re enthusiastic about costuming or beautiful women, this might to be for you. If you’re looking for more than that, this will leave you feeling cheated out of your money and time. Hitchcock is not a master of romance and one suspects that AFI honored several of his films on this list because of his reputation as one of the all-time greats. They’ve always had problems differentiating between the reputations that individuals hold, and the quality of their work. To Catch a Thief just doesn’t stack up when compared to Shadow of a Doubt (1943), so it’s hard to understand why they felt so compelled to honor it in a significant way.