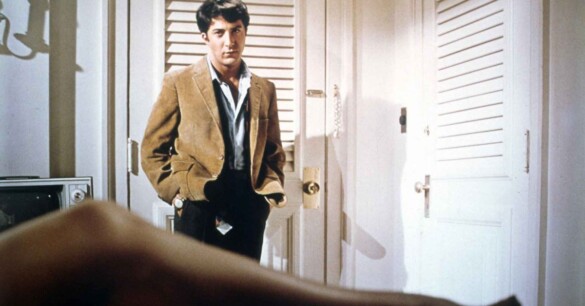 In many ways, time has not been kind to The Graduate (1967). Upon the first release, it was rapturously embraced by the counterculture generation. They saw Benjamin as an anti-establishment hero who saw through the phoniness of the conservative, middle-class society that surrounded him. Journalists promoted it as a radical rallying cry for a youth generation that wanted to forever alter the status quo. It became a mainstream cultural sensation and, for some, it is still synonymous with radical politics and the sexual revolution.

When I first saw it, I was aware of its towering critical reputation and I was too willing to accept the idea that it was a masterpiece. It had been so thoroughly hyped up that I assumed that it was a genuinely groundbreaking piece of art. All of its advertising suckered me into believing that it was going to blow my mind. I conflated the advertising with the product itself and lost sight of the fact that the film isn’t all that progressive or shocking.

As most people know, the film is about the struggles of Benjamin Braddock (Dustin Hoffman), a young, wealthy Californian who doesn’t know what to do with his life after earning his Bachelor’s degree. He returns home to Pasadena and agrees to stay with his parents for a while. He quickly finds that he is suffocating under the weight of his parents’ expectations. One night, he is sexually harassed by Mrs. Robinson (Anne Bancroft), a married friend of his parents, and ends up having an affair with her. His parents quickly become concerned about the fact that he appears to have no intention of getting a job and push him to date Elaine (Katharine Ross), who happens to be Robinson’s daughter. When he begins to get close to Elaine, he decides to break off his relationship with Robinson and determines that marrying Elaine will satisfy all of his desires. She breaks up with him after Robinson publicly claims that Braddock raped her, but Braddock continues to chase after her until she runs away from her own wedding ceremony to be with him.

The Graduate’s biggest issue that it seems to represent everything wrong with the sexual revolution. It pretends to be radical and progressive but, at heart, it’s a very conventional radical chic picture. It targeted white, middle class kids who were slightly dissatisfied with the ‘restrictions’ that society had placed upon them. They wanted to be able to have sex without being shamed for it and, like angsty teenagers, didn’t want to be told what to do by their parents. Braddock’s frustrations are fairly generic and rather than fighting back against a corrupt, broken system that ruined the lives of people who were genuinely in need. There is something selfish and entitled about Braddock’s worldview and you question whether the film’s fans were guilty of letting out a Freudian slip when they began fawning all over The Graduate.

The countercultural movement had become hip in the late 1960s and it had already been heavily commodified by Hollywood. This meant that there were plenty of young people who went to anti-war protests in the hopes of seeing Jane Fonda. These radical chic youths wanted all of the benefits of the countercultural revolution, without having to take on any of the disadvantages. They were quite happy to tell their parents to get lost, but they probably didn’t want to deal with a version of socialism that involved bread rationing. I suspect that this is why it took so long for progressive reforms to fully take root in American politics. So many of those radical chic youths became yuppies in the 1980s. When it became ‘cool’ to be a conservative, all of the Fonda wannabes decided to drop their liberal principles and start watching Firing Line.

The Graduate does feel like a blatant attempt to commercialize a cultural movement that was gaining popularity in 1967 and this might be why it is so vague when it comes to establishing the social and political context that influences Braddock’s decision making. Some have argued that the film is actually a criticism of Braddock’s actions and many see the widely acclaimed final shot as a reflection of the emptiness that many 1960s youths felt when they were faced with adulthood. After getting Elaine to run away from her own wedding to be with him, Braddock gets her to hop on a bus and you witness the two of them staring off into the distance with a confused, slightly anguished expression on their faces. Their elation at freeing themselves from the influence of their parents is quickly tempered by their concern over finding their own way in the world. This shot would be powerful if the film did more to develop the troubled relationship between Braddock and Elaine.

It also suffers from the fact that it isn’t nearly as scabrous or disturbing as the disquieting final shot of The Heartbreak Kid (1972), which could be viewed as Elaine May’s response to The Graduate. That film was more effective in dealing with the gulf that still exists between WASPy high society and middle-class Jewish communities. May aims to make a point about the struggle that ordinary Jews face when trying to gain acceptance in gentile communities and the final shot of the film suggests that the Jewish protagonist has locked himself in a gilded cage that is full of uncaring, unfeeling gentiles who will never fully accept a person like him. On top of all that, May had more to say about gender dynamics and was less afraid of making her audience uncomfortable.

It’s a real problem that Elaine, who is presumably meant to serve as a stand-in for an entire generation of sexually repressed young women, is such a blank slate. I can accept the idea that she’s meant to lack personality and a strong sense of self because she has always been taught to be deferential to others. I can’t accept the fact that a character who is so bland and vacant takes up so much of the third act. She sucks all of the air out of the room and leaves you yearning for Bancroft to slink back onto the screen. The film’s defenders would argue that Elaine comes across as a blank slate because Braddock has turned her into an idea and chases after her in the hopes of solving all of his problems, without considering the fact that he barely even knows her. I would give this argument more weight if we didn’t have to spend quite so much time with this nothing character. Audience members could be easily forgiven for falling asleep during the scenes in which Braddock chases her down. The whole film loses momentum and it becomes impossible to care about anything or anyone. If Nichols was going to pull a switcheroo at the end and reveal that Braddock’s victory was actually empty, he probably should have gone to the effort of making the audience care about his grand love affair.

There are plenty of ways in which the film disappoints, but it remains essential viewing for one important reason. It’s impossible to deny the magnetism of Bancroft’s iconic performance. She’s forceful and abrasive in a role that doesn’t actually give her much to work with. Robinson is a character who has to burst onto the screen and horrify the audience with her abusive behavior, but there’s a point where she is promptly shuttled off the screen and never really heard from again. Her character arc feels unfinished and Bancroft has the difficult job of effectively sketching out the character biography of a woman who isn’t exactly fully rounded. Her performance works because Bancroft wholeheartedly embraces the monstrous elements of Robinson’s character.

When she throws herself at Braddock and uses manipulative tactics to coerce him into having sex with her, she doesn’t hold back. Robinson is using her powerful position to intimidate a younger man and Bancroft doesn’t make any easy pleas for sympathy. There’s not a point where she cracks and telegraphs the fact that Robinson is a lonely older woman who is desperate for love and affection. She waits to reveal Robinson’s vulnerability until later on and finds a way to successfully make the point that Robinson’s unhappiness within her marriage does not justify her abusive treatment of her lover. She’s commanding and magnetic whenever she’s on-screen and you never want to take your eyes off of her. Hoffman does his best to keep up with her, but it quickly becomes clear that Bancroft is another level. When she disappears from view, the film loses a lot of its vitality.

You really can’t miss Bancroft’s iconic performance, but I wouldn’t blame anybody for feeling a bit disappointed by the film itself. The years have not been kind to it and it now seems shallow and overly calculated. There’s also something undeniably funny about the fact that AFI voters thought that this was a romantic film. Perhaps they were all searching for bland, vacant young wives and saw Elaine as the perfect woman? I can’t be sure of what their reasoning was, but this film’s inclusion on the list is truly perplexing.