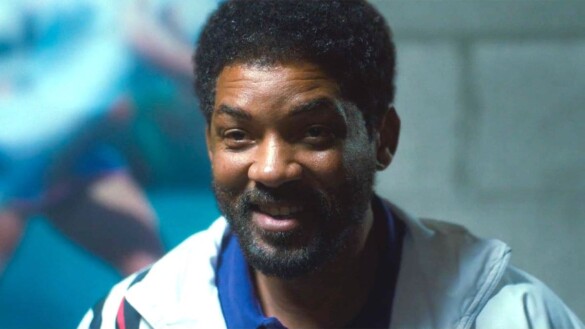 Synopsis: A look at how tennis superstars Venus and Serena Williams became who they are after the coaching from their father Richard Williams.

On paper, King Richard is exactly the sort of film that could have gone wrong. With the many themes and tonal balance the film has to strike as an Oscar-contending crowd-pleasing sports bio-pic, plus the framing of the narrative of Venus and Serena Williams’ success through the eyes of their father, there is a lot this film is tackling all at once. However, it did not take long for this film to settle me in and take me on this incredible journey.

What this film does right is the portrayal of the sisters’ father Richard, played by Will Smith. Yes, Richard is a passionate and caring father who will do whatever it takes to care for his daughters and get them to the top of their tennis game. Yes, Richard is willing to work overnight in order to train during the day and make their future work. However, throughout the film, he also makes mistakes and is confronted by them, and his character is rounded by what is Smith’s best performance in years. Not only that, but the success of the sisters is not truly defined by the father. With many stylish montage sequences, it is clear that their success came from the hard work that they put in, alongside the passion and love they have for the sport.

It was clear going into King Richard that Will Smith would give a strong performance, however, it is the entire cast that gives their all and the supporting roles are some of the best surprises of the entire year. Aunjanue Ellis has been the one many people have brought up, and she certainly is great, but it is Saniyya Sidney and Demi Singleton as Venus and Serena that are scene stealers throughout the entire film. Their burst of energy is insatiable, and it is so easy to fall in love with them from the minute they come on screen. With the knowledge we already have on the success the sisters will go on to, it creates an entertaining ride seeing them win every match and progress further.

As a biopic, King Richard feels more authentic than most and that is down to the heart of the story. Firstly, the crew cared about recreating some of the most important memories when certain moments are compared to the real footage shown at the end of the film. Not only that, but the film takes some turns narratively that I did not expect and don’t fit the typical structure of a bio-pic of this tone and yet it adds more impact to the story. I appreciate that screenwriter Zach Baylin took some risks and grounded this film in the facts and reality, and yet still found a way to make the film a celebration of the sport and of the achievements.

Having a black man direct this story, Reinaldo Marcus Green was able to tell a story within this bio-pic that reflected the attitude of America in the 1990s, and one that is sadly still around to this day. For a sport that was heavily dominated by white people for generations, the film touches on that and shows the many issues that the Williams family faced trying to crack into the league. Green manages to balance these tougher – yet important – storylines with the feel-good nature of the overall narrative to create an impactful story with heart, and one that is incredibly entertaining to watch.

Is it a little bit long, clocking in at 138 minutes? Perhaps, and it wouldn’t lose too much cutting out 10-15 minutes. Do I wish the film added more weight to the relationship of Venus and Serena Williams as sisters? Yeah, I do. That message gets lost in the second half as it becomes clear the film wants to focus on the immediate stardom of Venus and her journey to beginning her tennis career. However, it is hard to deny that when the film ends and we get the montage footage of the real Williams’ sisters, there is plenty to celebrate. King Richard is inspirational, crowd-pleasing, and is a film that shows exactly how bio-pics should be told.