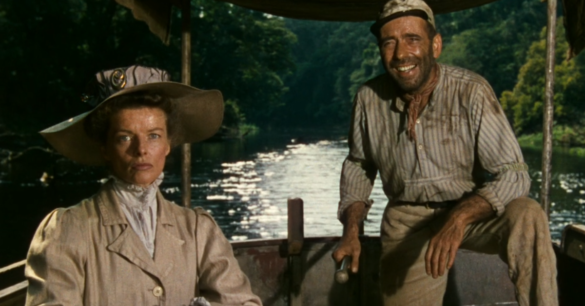 The African Queen (1951) is one of those peculiar classics that isn’t exactly outstanding in any category. Where most beloved masterpieces are revolutionary or innovative in some regards, The African Queen follows a formula that had been popular since the beginning of time. This makes it difficult to understand why it has remained so firmly entrenched in the public consciousness. Perhaps it is so well-liked because it features the involvement of so many icons. Humphrey Bogart, Katharine Hepburn and John Huston have managed to endure as personalities. Even if people haven’t seen Bringing Up Baby (1938), they could probably still imitate Hepburn’s bizarre idiolect. Everybody who hasn’t seen the film probably still feels like they know what it’s about and, for the most part, their suspicions are probably correct. It is a film that typecasts its stars and its plot will be familiar to anyone who has ever read an adventure-based potboiler about a rough around the edges man who slowly falls in love with a feisty, upper class woman. It doesn’t throw a whole lot of surprises at you and that has probably helped it to remain popular. Audiences can be absolutely sure of the fact that it does what it says on the box.

The action takes place in German East Africa in 1941 and centers around the actions of Rose Sayer (Katharine Hepburn), a Christian missionary who has never experienced real romance. She is horrified when the Schutztruppe burn down the village that she and her brother Samuel (Robert Morley) were living in. When Samuel dies, she becomes bent on exacting revenge and plans to sink the Königin Luise, a valuable Schutztruppe gunboat. She enlists the help of Charlie Allnut (Humphrey Bogart), a working class mechanic who operates a steamboat, to pull off her audacious plans. They initially struggle to get along, but they begin to fall in love when they realize that they share the same goals. As he begins to fall more and more under her spell, Allnut gets increasingly tangled up in her harebrained scheme.

Anybody who has seen It Happened One Night (1934) or Romancing the Stone (1984) will be familiar with the plot beats that the screenplay efficiently deploys. An upper class gal and a lower class guy overcome their differences while going on an adventure that allows them to learn about how the other half lives. The woman will inevitably learn how to perform menial tasks that get her hands dirty and the man will become more cultured and refined. There will be a scene in which the woman discovers that she is surprisingly proficient at shooting a gun or hacking an animal to death and her male partner will gaze at her in awe. These are tropes that appear in The African Queen and the screenwriters don’t do much to put their own spin on well worn material.

Nothing about The African Queen is radical or different but it does find ways to quietly set itself apart from the rest of the pack. I particularly admired the fact that the actors and screenwriters don’t force Sayer and Allnut to despise one another at the beginning of the film. You can sense the fact that they are not entirely comfortable around one another but, like real human beings, they do make an effort to be polite. Most of the tension simmers under the surface and Sayer dutifully bites back snarky comments when Allnut does something that irritates her. When they finally erupt and start going at each other, it actually makes sense. Rather than seeming like two unnecessarily pugnacious individuals who will take any opportunity to browbeat their enemies, they seem like perfectly pleasant adults who have snapped under harsh conditions. Their banter is more entertaining because it seems to come from a place of genuine hurt and frustration. The script sells us on the idea that these two are resourceful enough to work things out, and this means that we root for them to finally get along.

Having said all that, I must note that the screenplay doesn’t handle the transition from friends to lovers with all that much grace. The scenes of Bogart and Hepburn bonding over their mutual desire to survive and forming a close friendship are incredibly touching. The two actors were good buddies in real life and they regard one another with genuine fondness that allows them to soften their tough screen personas. You do see them let down their guards for a moment and choose to open themselves up to somebody who is their equal. This is why it seems so odd when they start kissing and talking about getting married. They’re so believable as two old pals that they don’t convince as crazy kids who are passionately in love. Bogart and Hepburn have great chemistry but they don’t have that type of chemistry. When their characters fall in love, it just doesn’t make sense. The story would have been more satisfying if they hadn’t been forced to enter into a contrived romance.

The African Queen serves as a fantastic display of the virtues of old-fashioned craftsmanship. It’s a solid film and it has the sort of broad appeal that great blockbusters need to possess. However, I would be lying if I pretended that I didn’t feel slightly unnerved when Bogart and Hepburn started playing tonsil hockey. They might be legendary movie stars, but that doesn’t mean that they needed to be cast as lovers.