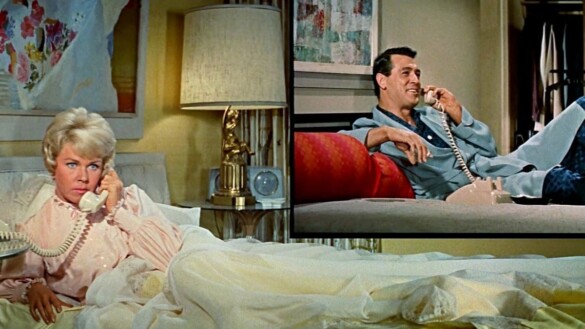 Pillow Talk (1959) can probably hold claim to being one of the most influential films of the 1950s. I know that you’re probably scoffing as you read that last sentence and wondering how I could put a Doris Day romantic comedy in the same category as The Night of the Hunter (1955) and Touch of Evil (1958). I put it in league with those other classics because Pillow Talk did help to define the modern romantic comedy formula. It combines wacky workplace comedy with a battle of the sexes theme and it did reflect the beliefs of a certain segment of society in the 1950s. It wasn’t radical or shocking or transgressive but most of the light woman’s pictures of the 1960s were clearly patterned off of it. That does have to count for something and it is remarkable that this formula is still so irresistible.

The film’s success is inextricably tied to the resourceful, businesslike star persona of Doris Day. She portrays Jan Morrow, a single, career driven interior decorator who despises playboys that use women for sex. Morrow was just one in a long line of virginal, spunky women that Day played, and she perfectly fits into the niche that she carved out for herself. The plot is built around Morrow’s character development, as she initially loathes her neighbor Brad Allen (Rock Hudson) for his womanizing ways. The two share a party line and she is irritated by the fact that he is constantly sweet talking his many conquests. She has never seen him in person but becomes determined to ward off men like him. Allen coincidentally meets her one night and pretends to be Rex Stetson, an innocent Texan farm boy, in order to get closer to her. They enter into a relationship and he continues to deceive her, all the while tempting her with the prospect of sex. He begins to develop real feelings for her whilst she begins to question her traditional perspective on relationships. When she learns that he has been lying to her, she pushes him away and finds herself wondering whether she will ever find a man who truly loves her for who she is.

Morrow’s journey is carefully programmed to allow audiences to flirt with the idea of having illicit premarital sex, without having to walk out of the theatre feeling naughty and rebellious. They get a brief walk on the wild side on top of receiving a confirmation of all of the beliefs and values that they already hold. On some level, this is irritating. Day didn’t typically get to play self-possessed, confident women who felt complete without involving a man in their lives. She did get to play a working woman and typically had a strong bond with her closest female friends, but her films certainly don’t feel like feminist texts.

Even if modern viewers end up feeling uncomfortable with the message that Pillow Talk ultimately sends, it still endeavors to put women front and center. It never feels like Day is being undercut by her male co-star and she and Hudson have a relaxed, easy chemistry. Unlike Bette Davis, she didn’t have to contend with appearing in romantic dramas with male leads that just weren’t on her level. Hudson seems willing to support her and the two never appearing to be competing for attention. This might have been why the two were so popular as a screen pairing. They don’t just act like two A-list stars who have been thrown together. There’s real fondness in their eyes as they bicker away at one another. You just can’t find that in most other on-screen partnerships.

Beyond the pleasant chemistry shared by Hudson and Day, Pillow Talk is most notable for its extreme devotion to formalism. It is set in a bizarre, far-off land that barely resembles the planet Earth. Every room is filled to the brim with shiny, brightly-colored objects, every woman is dressed in trendy clothing and everything looks so plastic and artificial that it becomes a real aesthetic. Milton Carruth liberally employed split screen technology to slip innuendo into scenes that were wrought with sexual tension and to generally spice up some of the film’s unoriginal content. He doesn’t push it nearly as far as he could have, but it is yet another touch that reminds you of the fact that you’re watching a movie. If the fantastical nature of the world of Pillow Talk wasn’t conveyed by Day’s perfectly primped hair, it is firmly established by all of the nutty Rube Goldberg machines that are on hand to elicit laughter. The image of Day and Hudson in the bath, with soap suds covering up all of their naughty bits and only a dividing wall between them, is something that stays with you. Even when the script suggests that the characters are keeping everything above board, the visuals let you know otherwise.

This wasn’t the most innovative romantic comedy on the list and it definitely feels rooted in the sexual mores of the 1950s, but I can see why it remains a crowdpleaser. It offers up escapism for real working women who don’t get to wear designer clothing all the time or spend their nights hanging out in fancy restaurants. It succeeds in drawing you into the romance between Morrow and Allen, with all of the convoluted plot twists that come along with it. Its placements on the list does make sense and it would seem rather unfair to completely exclude Day from any list of the greatest romantic films of all time. As one of the undisputed icons of the genre, she deserves considerable recognition.