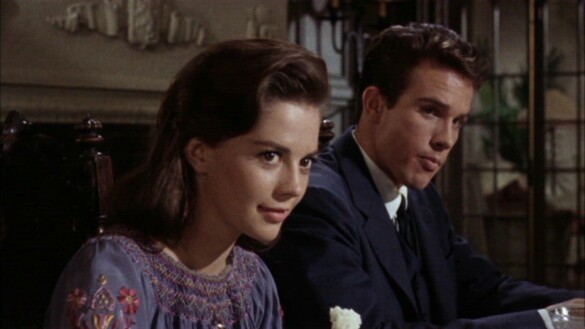 Splendor in the Grass (1961) is one of those sex-tinged melodramas that can’t help but feel dated. It’s not just that it’s a period piece set in the 1920’s. It’s that it was written by William Inge, who held the position of being an ersatz Tennessee Williams throughout the 1950’s and 1960’s. Both playwrights traded on racy, shocking references to sex, homosexuality, marital struggles, and pedophilia. As the Hays Code began to weaken and audiences displayed a predilection for mildly controversial content, film producers realised that they could strike gold by bringing notorious theatre productions to the screen. Naturally, the content in the plays were significantly toned down when they reached the big screen and they didn’t end up offending anybody’s morals too much. The original plays seem incredibly tame by modern standards and this means that it’s almost impossible to understand why their film adaptations were such a big deal back in the day. In 1958, audiences were willing to endure almost anything to see Elizabeth Taylor walk around in a chemise for a couple of minutes. In 2021, this is nothing to get excited about.

It is notable that Williams’s work has endured in a way that Inge’s work has not. This might be because Williams was willing to go further than Inge in attempting to shock audience members. He was quite happy to turn Suddenly, Last Summer into a story about Spanish cannibals eating a wealthy prig alive after serving as his sex slaves for several months. Inge always seemed to be conscious of the fact that he was targeting pearl clutching middle class women who didn’t want to be called out on the fact that sex might be *gasp* enjoyable. They wanted to stare at hot-bodied actors without being judged for it and see a ‘classy’ play instead of opening up a pornographic magazine and seeing the nude male form. Inge gave them the opportunity to do this and his works caused such a stir that he managed to win the Pulitzer Prize.

When it came time for him to write the screenplay for Splendor in the Grass, he was already out of touch with the American youth, who would end up being the driving force behind the countercultural revolution that would occur later on in the decade. His trite pieties about the dangers of sexual repression and taste for old fashioned melodrama would have seemed phoney to teenagers who were actually going through their first sexual relationship. Today, the contents of Splendor in the Grass seem like the stuff of a trashy teen soap opera. Inge occasionally tries to touch on an important subject but it’s always clear that he isn’t terribly interested in saying anything new or radical about the subjects that he considers. 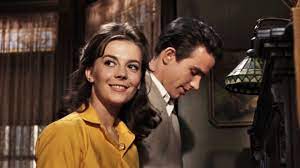 His messy, uneven script is filled to the brim with fascinating supporting characters who show up for a scene or two and then disappear from the film for unexplained reasons. Unfortunately, he chooses to center the story around Deanie (Natalie Wood), a popular teenage girl who is well-liked in her small Kansas town. She dates Bud (Warren Beatty), an equally bland individual, and grows desperate to have sex with him. Both of their overbearing parents intervene and Bud is warned against marrying Deanie. She ends up having a mental breakdown and goes to a mental institution for a short period of time, while Bud ends up getting married to a woman that he does not love as much as his childhood sweetheart. They briefly meet up several years later and both end up wondering what could have been.

It would be an understatement to say that the sexual politics in Inge’s supposedly liberal script have aged poorly, but the film’s biggest problem is that the story just isn’t nutty enough. It’s so busy taking itself seriously that it never takes the time to realize that it’s actually a soapy potboiler. It falls into the same category as One Tree Hill, but it isn’t able to supply the sort of thrills that a television soap opera can provide. You keep wanting the film to shift its focus from Bud and Deanie to Ginny (Barbara Loden). She’s Bud’s sister and she’s well known as a bit of a bad girl in their town. She’s promiscuous and self destructive but there’s a sense that she is in control of her own desires in a way that her female peers aren’t. She is ultimately punished for being a ‘slut’ but Loden makes a real impact when she’s on screen. Director Elia Kazan was known for his love of neurotic, wounded women who were slightly tragic, and yet Loden doesn’t feel like a traditional Kazan woman. She’s rapacious and lively and gloriously angry at the world. Her passionate, fiery portrayal of an unconventional woman reminds you of how thinly drawn the protagonists are.

Inge’s script is the film’s biggest problem but Kazan doesn’t really help matters. He was famed for his ability to build up a very specific Southern Gothic atmosphere in his adaptations of Williams’ plays and you expect his version of small town Kansas to feel lived in and immersive. In Baby Doll (1956), he does so much with just a couple of locations and Archie Lee Meighan’s ranch is brought to life as a version of hell on earth. Everybody feels trapped in the Mississippi Delta and horny farmers are liable to begin chasing their married conquests around a dilapidated mansion. In that film, Boris Kaufman’s black and white cinematography perfectly captured the heady eroticism in the air. Kazan couldn’t exactly depict Eli Wallach touching Carroll Baker’s private parts, but the brutality of the imagery on screen let us know that there was something improper occurring just outside of the frame. Kaufman returned to work with Kazan on Splendor in the Grass but this collaboration was considerably less successful. The film is shot in glorious Technicolor and the anguish and horror that Deanie feels is barely hinted at by the bright, candy coloured imagery that we see on screen. The 1920’s period detail also comes and goes and there are times when you think that this could have been set at any point in the early twentieth century. One minute Loden is dancing at a party like a hard drinking jazz baby and the next Wood is sitting in a classroom that looks like it could have existed in the 1960’s. So much of the film’s message is meant to be about the suffering of middle class Americans and their struggles with the bourgeoisie values that keep them from enjoying sexual pleasure. In order to drive home this point, Kaufman could have made more of an effort to give the audience a sense of the boredom experienced by the inhabitants of this sort of uptight, close-knit community.

At the end of the day, there is something dishonest and prurient about this film. It claims to be seriously interested in the troubles of a sexually repressed young girl who feels trapped in a society that doesn’t extend much sympathy to women. In reality, it’s a drama that revels in the fact that it is daring to be about a crazy, sex-obsessed girl. I always felt that I was being encouraged to look askance at her and inspect her like one of P.T. Barnum’s Freaks, instead of empathizing with her. There is something pat and simple-minded about the conclusions that it eventually draws, and most of the characters have their problems solved in a way that feels utterly artificial. Nothing rings true and I imagine that teenage girls of the 2020’s would find themselves giggling over Inge’s wildly incorrect assumptions about how they behave in the presence of men.

Hollywood has well and truly moved on from this sort of pap and, while the modern cinema landscape is far from perfect, we should all be thankful for that. We have gotten smart enough to resist the allure of Inge’s pretentious but inane dialogue.