Movie Review: ‘The Worst Person in the World’ Brings Life Back To The Rom-Com 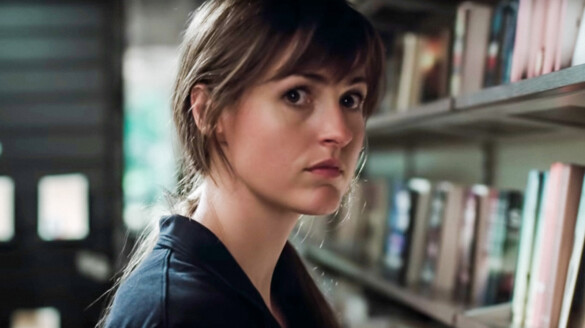 Synopsis: Chronicles four years in the life of Julie, a young woman who navigates the troubled waters of her love life and struggles to find her career path.

Constructed in twelve chapters, a prologue, and an epilogue; The Worst Person in the World chronicles four years in the life of Julie (Renate Reinsve), a woman that begins her thirties with an existential crisis about who she is, what she wants in life, and what career she wants to settle on. She jumps from studying surgery to psychiatry to photography and eventually settles as a worker in a bookshop. Echoing her career, her love life isn’t that stable either. She floats between casual lovers and mini relationships until she meets Aksel (Anders Danielsen Lie), a forty-year-old comic book writer that, unlike Julie, lives a steady mundane life. So when they get together, Julie finds herself stuck between giving in to Aksel’s way of living or pursuing her journey of passion and self-discovery.

Written by constant collaborators Joachim Trier and Eskil Vogt, and directed by the former, The Worst Person in the World marks the third installment in Trier’s “Oslo Trilogy,” which is also made up of 2006’s Reprise and 2011’s Oslo, August 31st. The trilogy is connected by the setting in the Norwegian capital and the theme of struggling individuals trying to find their way into adulthood. Trier’s latest brings familiar notes from the other two films, but it digs deeper and focuses on the millennial experience in a modern society and the rapid fluctuating states associated with it.

Julie is brought to life by Renate Reinsve, who worked previously on a Joachim Trier set when she took on a supporting role in Oslo, August 31st. But here, Trier unleashes her acting abilities on to the world playing a highly nuanced and complex character. Reinsve has an incredible on-screen presence and portrays Julie with magnetic energy and outstanding vulnerability. There is no doubt that her best actress win at Cannes was very well deserved. The rest of the cast is astounding as well; I don’t know what else Anders Danielsen Lie has to do to be recognized as one of the best actors working today. He and Herbert Nordrum (who plays Julie’s other love interest) deliver very different yet equally marvelous, intense, and lively performances that elevate the film to be a true showcase of talent on the big screen.

Looking at his back catalog, Trier’s decision to embrace the romantic-comedy genre may be confusing at first, but it turns out to be the perfect vessel for this story, pushing the genre in the process to the best it has been in years. This wouldn’t have been possible without the tightly written script, which walks a fine line between romance and comedy. Additionally, Trier’s direction imbues different chapters with changing elements from editing and camerawork to style and tone to reflect Julie’s state, giving each section a unique character and distinctive personality.

Our main character’s general insecurities stem from a continuous striving to achieve her full potential to reach a place where she could be at peace with her personal identity. And her anxieties aren’t helped by constant comparison to her ancestors whose limited choices allowed some of them a single job and relationship their whole life, while some never got that choice at all. Julie’s dilemma is quite the opposite; it isn’t the lack of choice that keeps her mind from resting; it’s the multitude of options. Julie’s fear of commitment in her career and relationships cripples her on both fronts. She thinks if she doesn’t have her entire life figured out by thirty, she will be a failure because of this notion that our world has constantly advertised that we seemingly live in a “time full of rousers” and it’s your problem if you can’t find a place you belong to and feel happy in.

Trier astonishes at conveying this global condition of millennial restlessness by meticulously crafting Julie’s story to have a universal relatability; any viewer of any age will identify with one or more aspects of her inner struggles. Julie’s unfair judgment of herself as a failure is what makes her question her self-worth and what eventually sets up colossal consequences to her minor missteps. Like any of us, at one point or another in life; Julie might be a bit lost but she’s by no stretch of the imagination the worst person in the world.

A Day In Monaco: Films Set In The Famous Principality

Monaco.    A small nation-state within France and a place where the rich come to live and avoid... Read More »

Billy Wilder was a director with an extensive color palette. Ask a number of Old Hollywood enthusiasts what... Read More »