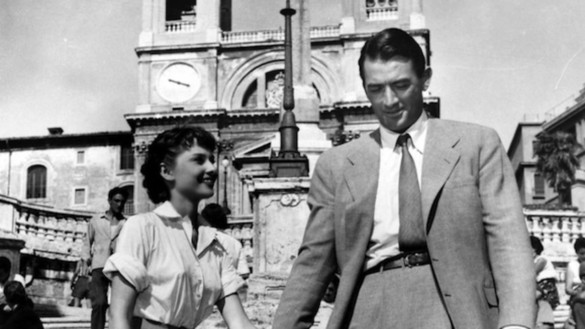 Am I the only person on Earth who is not a fan of Audrey Hepburn? She was launched into superstardom by Roman Holiday (1953) and yet I can’t see what others saw in her. Everything that they find charming and adorable about her, causes me to grind my teeth. Myself and Emma Thompson find it difficult to tolerate her “mimsy-mumsy sweetness without any bite” and I resent the fact that she was cast in so many roles that asked for a more capable actress. Roman Holiday is a vehicle for her talents and it mostly exists so that we can marvel at her beauty (which I can understand) and be won over by her engaging in all sorts of hi-jinks. I wanted to retch in most scenes where she was engaging in light, decidedly forced comedy. Unfortunately, that is what takes up most of this film and that meant that I walked away from it feeling as though I had lost my love of cinema.

Princess Ann, Audrey Hepburn, is bored with her lifestyle of being ferried around to various exotic locations and being forced into attending dull events. She finds freedom when she meets reporter Joe Bradley, Gregory Peck. He decides to write an article about his time with her and deliberately deceives her in order to collect information on her. She wants to be a normal girl for a day and ends up falling in love with Bradley. He is torn between being honest with her and advancing his career by publishing an explosive story. They continue to get closer and closer, but know that their time together must end. She is greatly depressed at the prospect of returning to her former lifestyle but knows that she has to give her personal happiness up.

This is a pretty thin plot and most of the film is taken up with Ann and Bradley engaging in a variety of silly antics. None of them are particularly funny and there is something incredibly calculated about the ‘charm’ of the script. Dalton Trumbo has attained noble martyr status because he was blacklisted by the HUAC during the McCarthyism era. He was a prominent member of the Hollywood Ten, who did not back down when he was threatened with serious punishment by the wrongheaded, jingoistic conservatives who were in charge. He deserves some sympathy for having his freedom taken away from him but I do question whether he was even a good screenwriter before he was officially prevented from working in Hollywood. He famously wrote Roman Holiday, and many other films, under different nom de plumes and had many other writers take credit for his work in an effort to avoid being publicly attacked. We can applaud this act of defiance and celebrate the fact that he continued to work despite opposition but does that make this a well written film?

He takes a basic romantic comedy setup and somehow manages to mess it up. This does have a lot in common with It Happened One Night (1934) when it comes to its plot but where that film featured rich characterizations, perfect pacing, and genuinely hilarious moments of comedy, Roman Holiday comes up short. Bradley is icy, asexual, and uptight, in the way that a lot of Peck characters were, and that means that it doesn’t really feel like he and Ann are all that different. He’s so buttoned up and put together that we can’t believe that he would seem out of place in an event that hosted royals. In order for the opposites attract dynamic to work, the two lovers actually have to be substantially different. Peck and Hepburn both come from the same school of acting. They exist in that Hollywoodland in which everybody speaks with a vaguely Transatlantic accent and display no signs of having a beating heart. The two of them look like shiny but unexpressive dolls throughout this film and the script doesn’t really help as it asks them to play ‘perfect’ people instead of playing complicated, relatable figures.

Trumbo seems willing to play along with those who see Hepburn as a delivery system for moments of mimsy-mumsy sweetness. That’s why we get a lot of scenes that entirely revolve around her smiling or laughing in a mannered way. The build-up is never terribly compelling and I wanted the chemistry between Peck and Hepburn to blossom at some point. This might have been better if it simply admitted what its real intentions were, and served as a vanity project for its star. Trumbo stuffs too many zany incidents into this script and makes a last ditch attempt to wring dramatic pathos out of the ending of this story. I didn’t find myself crying as Bradley and Ann shared one last kiss and I was honestly glad to realize that the two of them weren’t going to be together anymore. I just couldn’t see why they would stay together.

I never want to see Roman Holiday again and I regret the fact that I wasted so much time on it. I might put it on a list of my top 100 least favorite films but it would never be anywhere near a list of my favorite romantic films. I assume that AFI members chose it because it has a wildly over-inflated reputation and some of them were fans of Hepburn’s irritating performance. I resent them more than ever. Who wouldn’t?