Movie Review: ‘Slalom’ is a French approach to the #MeToo Movement 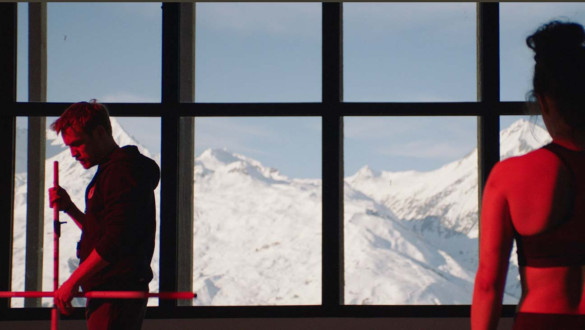 Synopsis: Slalom follows the relationship between a teenage ski prodigy and her predatory instructor.

In Slalom writer/director Charlène Favier offers a story of abuse of a young girl at the hands of an authority figure. Presented through a neutral lens, and set in the cold scenery of the Alps, the film exposes the psychological and contextual trappings that allow a teacher to take advantage of a girl looking for validation.

Lyz Lopez (Noée Abita) is an ambitious ski prodigy. Her arrival in an elite ski club in the Alps means that she must prove her value quickly to the demanding coach, Fred (Jéremie Renier). He is strict, even abusive, towards his students, looking for that child that can bring him glory just as he had it when he was younger. It seems that Lyz is his long-awaited answer. She is driven, fearless, and utterly perfect as she climbs down the snowed mountains with ease and grace. Their ambitions are synchronized.

Charlène Favier defies expectations and stereotypes with her lead characters. Lyz is independent, ruthless, and motivated. Still, she is completely alone in a hostile environment of competition and animosity. Her mother is occupied with a far-away job and a blossoming romantic relationship, her father is out of the picture. Her loneliness is tied to her independence, so she creates a bond with Fred, fed by their training lessons and ambitious plans.

It is constantly and conveniently forgotten by Fred that Lyz is a child, even as Favier’s lens is always aware of it. Whether it is through Lyz’s heartbeats in moments of tension, the focus of the camera on her tiny hands as she faces overwhelming moments or her explosive personality that is starting to shape, Favier does not allow the audience to forget that she is a teenager.

Beyond his psychological abuse – so common in real-life relationships in a context of extreme pressure – Fred physically assaults Lyz in one of the many moments that they spend together. These scenes are sufficiently graphic to understand Lyz’s confusion and violation – as well as her panic – but remote enough to avoid being gratuitous or incendiary.

Fred is not represented as a monster. He is just a man, as countless abusers. First, he is cruel and determined, maybe a bully – he represents the kind of leadership that is finally starting to be condemned – but focused on his job. He nonchalantly measures the girls and commands them to lose weight, scolds the athletes when their performance is poor, and even mansplains to Lyz her own menstrual cycle. However, when their relationship takes a turn because of his actions, he never loses his humanity. Sometimes his personal conflict is evident in Renier’s eyes. Fred is a distinguishable representation of the abusers that are close to their victims and commit crimes taking advantage of their familiarity and trust. Simply put, Renier portrays a predator.

The movie is agile at presenting different kinds of abuse, some of them normalized in our culture, others drastically denounced. First, it is a matter of power and verbal abuse and too much pressure on the young athletes. Nevertheless, as the relationship between Fred and Lyz becomes more familiar, boundaries are lost. She, too naïve and too young to understand what is happening; he, too swift to control her with games and manipulations.

We have seen countless stories about the pressures of excellence and the way this creates a toll on the receiving part. At the start, Slalom could have been easily compared with titles such as Whiplash, Molly’s Game, or Foxcatcher. Nevertheless, as the story progresses, it exhibits a grooming testimony, realistically reflecting the stories that keep appearing in the news about abuse in high-performance sports. As such, it comes closer to the documentary Athlete A. In this regard, Slalom becomes an important tool of exposition from a country that has had a complicated relationship with the #MeToo Movement.

In addition, Slalom successfully presents the internal turmoil of a victim of sexual assault. Perfectly captured by the young Noée Abita, Lyz goes through an emotional evolution: she likes Fred, she thinks she is in love with him, she isolates from everyone else, she protects him, and she despises him. Her emotions change as she starts to understand what happened. Her experiences make her grow up too soon, risking even her most ambitious dreams.

In this regard, while the ending is solely focused on Lyz, it reflects a resistance to offer deliberate punishment of the abusers. As empowering as it is to see the transformation of the victim, the movie fails in offering even a glimpse of accountability or exhibition. The resolutions arrive in a revolutionary fashion on the inside, but quiet and contained in the exterior. Nevertheless, Slalom offers a well-executed story of abuse and ambition.