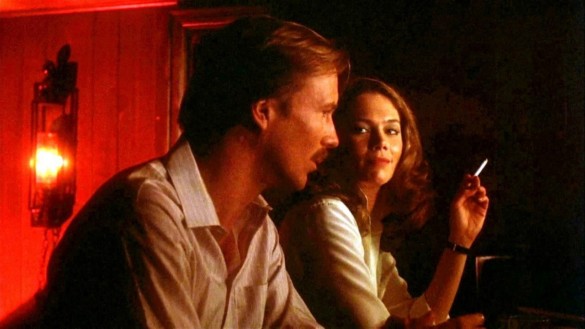 Body Heat (1981) seems to have been made so that the subtext in film noirs of the 1940s, could become text. You get sex scenes and nudity, rather than violent kisses and use of double entendre in dialogue. This seems to be the only thing that Lawrence Kasdan thought to add to a genre picture that shamelessly steals from classic film noirs and yet fails to generate the passion, suspense or sexual tension that exploded off of the screen in Double Indemnity (1944) and Criss Cross (1949). There is always the nagging feeling that you are seeing an undistinguished simulacrum of the real thing. This perception could have been challenged if Kasdan had tried to put his own spin on the genre and comment on how society had changed in the years since film noir fell out of favor. This doesn’t have a distinct 1980s air about it and Kasdan’s dialogue doesn’t have the flavor of any of the romantic comedies that he would later become known for.

If you have seen Double Indemnity, the plot will immediately seem familiar to you. The story revolves around the libidinous Ned Racine (William Hurt), a slimy lawyer who is willing to cut corners in order to get around the law. He regularly has casual sex with women and enjoys the thrill of seducing them. One night, he comes across Matty Walker (Kathleen Turner), an attractive married woman, and attempts to flirt with her. A few nights later, he invites himself to her house and the two have sex. They engage in an illicit affair and become frustrated with the fact that her husband, Edmund (Richard Crenna), complicates their arrangement. Walker knows that she could collect a large insurance settlement if Edmund were to die and Racine eventually decides to murder him so that he can be with Walker and live off of her husband’s millions. He carries out the murder but complications ensue and he begins to suspect that Walker wants to implicate him in the crime.

There is nothing about the basic plotline that will turn off fans of old noirs, but they will probably be unsatisfied with Turner’s unimaginative impression of actresses like Barbara Stanwyck, Joan Bennett, Jean Simmons, and Mary Astor. Her performance feels like one long-acting exercise and she is never completely convincing in the role. In her attempt to combine elements of Phyllis Dietrichson, Brigid O’Shaughnessy, and Diane Tremayne, she forgets to give Walker an identity of her own. The husky voice, the rigid posture and the cutting remarks all feel borrowed. She could have made it clear that Walker was a woman who was actively trying to imitate the sirens that appeared on screen. Her phoniness could have been telegraphed from the beginning and her artificiality could have felt like a character trait, rather than a distraction from the performance that Turner was trying to give. She’s meant to be sultry enough to make us believe that a man would kill for her, but she just doesn’t deliver the goods.

She isn’t helped by the fact that the sex scenes themselves have a mechanical quality about them. You can see faint hints of boredom on the faces of the actors and one wonders whether we ended up seeing the 30th take of Hurt removing Turner’s undergarments. The overwrought score seems to be telling us that these people simply can’t control themselves and must fornicate. This would seem to make sense when you consider the fact that this, like so many other morality tales, ends up being about why a person shouldn’t engage in an extramarital affair. It’s rather exploitative and dishonest in the way that it uses sex to draw audience members in, before telling them that it’s bad and dirty and will inevitably cause them to murder an innocent man and end up serving prison time. Usually this is a technique that satisfies the desires of conservative members. They are allowed to enjoy the experience of watching soft-core pornography without dealing with any of the guilt that comes from supporting an affair. I do have issues with this sort of morality, but, when executed right, I can enjoy an illicit sex scene as much as anybody else. When I have to watch Hurt unceremoniously dropping some decidedly un-sexy underwear on the floor, it doesn’t exactly get my blood pumping.

I also question why the sex needed to be shown if this was going to be one of those noirs that implies that sex is a force for evil. Kasdan tries to show all of the ways in which Walker is a menace in the bedroom and uses her sexuality to control Racine when he isn’t going along with her plans. At the same time, I think that he could have achieved more if the sex was just alluded to and we never explicitly saw the scenes in which she was able to change his mind. She would seem so much more terrifying because we would be left to imagine what she was capable of doing. Kasdan’s visuals could never be as scary as the feverish nightmares that exist in the back of a person’s mind.

It is very difficult to see this as a love story when Walker and Racine are only sexually attracted to one another. Despite the fact that they frequently claim to love one another, we get a lot of evidence to the contrary. I think that AFI misread the message of this film in categorizing it as a romance, and I can’t see why there were so excited by it. There were better sexy 1980s dramas out there.