Movie Review: ‘The Night House’ Guarantees to Keep You Up All Night 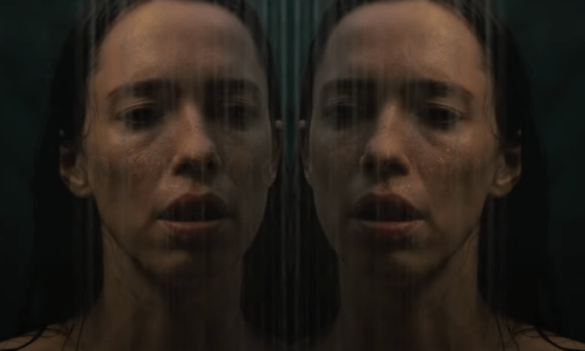 Many of us know the fear of the things that go bump in the night. However, what if that bump might just be the one person you wish to see the most? A loved one who has recently passed? Would you retreat or push forward in the hopes of somehow being reunited with a person you never thought you’d see again?

That’s the dilemma that begins to plague Beth (Rebecca Hall), a teacher mourning the unexpected death of her husband Owen (Evan Jonigkeit) in David Bruckner’s The Night House. Already grappling with the weight of trying to understand how the person most precious to her could be taken so young, Beth begins to experience troubling signs that maybe his presence hasn’t quite left their lakeside home. When night comes, Beth’s dreams turn to frightening visions, sounds, and images distorting reality to a point where she no longer knows truth from fiction.

Haunted house films are nothing new, yet Bruckner manages to make the classic horror trope feel alive again with an unnerving approach that knows exactly the right buttons to push at the right time. An image of Owen, lurking in the water, staring up at Beth, sends a chill down your spine. A stereo turning on from the other room makes you shriek in terror. Jump scares have (often rightfully) earned a negative reputation over the last two decades. Bruckner is able to demonstrate that when utilized properly, they can land in a way that feels earned, as opposed to cheap and easy manipulation.

Part of that comes from the way in which the filmmaker is able to set the pitch of The Night House at a steady unease. As Beth begins to investigate these strange happenings, exploring her husband’s life and the secrets he was keeping from her, every scene starts to hold a sense of discomfort, a feeling that things aren’t quite right. Events as seemingly serene as Beth going to a bookstore begin to hold the fear that something demonic could be right around any corner. Mainstream horror simply doesn’t get as persistently unsettling as this.

A veteran of genre films such as The Signal and The Ritual, Bruckner is no stranger to getting under an audience’s skin, but it’s his collaboration with Hall that truly takes The Night House to the next level. An actress who somehow still doesn’t get the credit she deserves (her performance in Christine remains one of the best of the past decade), Hall has an innate ability to sink into her characters in a way that allows the audience to feel every single thing that she is feeling. That’s never more crucial than in the realm of horror, a genre that can quickly become silly if a wrong step is taken.

While the film’s script, by Ben Collins and Luke Piotrowski, opens up doors to some interesting questions regarding how much we can ever really know a person, The Night House is, on paper, a bit conventional. Haunted houses as metaphors for trauma can be seen in a few dozen films or television series released each year, but it’s Bruckner and Hall’s combined forces which elevate this to something that demands attention, getting under your skin like few other pieces of horror in recent memory.

Whether you’re seeing The Night House in a crowded theater or in the comfort of your own home, it’s sure to be effective. Be wary, though, of watching it alone at home late at night, as the specific ways in which Bruckner manages that lakeside living space are sure to make you distrust your own environment in a way you never thought possible. If you’ve ever walked around your home in the middle of the night and thought for a second that you saw a person standing on the opposite end of the room, only to discover it was just a coat rack or a bookshelf lit in a peculiar way, Bruckner sees you and wants to exploit that experience for maximum impact.

Architecture becomes a vital component of The Night House in more ways than one. While the home Beth is living in holds special meaning to her, it also becomes her living nightmare, as Bruckner structurally warps the environment in subtle ways that are practically incomparable to anything we’ve seen before. Great care in production design and cinematography craft images that cause the audience to focus in on specific areas, some of which they’re bound to regret once a wall shifts and sends them into a frenzy of terror. A warning to all who enter The Night House: this isn’t the film to watch before bed.