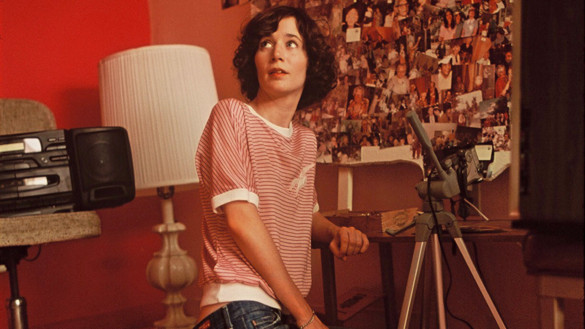 Despite the global crisis of the COVID-19 virus, the show must go on. Four new films enter the collection and one is given a brand new re-release. A comic Western, a gritty French Resistance story, a black satire against communism, a stellar indie, and an all-around wonder from Mister Wes himself. The new introductees into the Criterion Collection are:

The same year John Ford directed his Western classic Stagecoach, George Marshall made a comedy out of the saloon with the use of James Stewart and Marlene Dietrich. Stewart is a deputy sheriff, one of charm rather than seriousness, and Dietrich is the seductive (as usual) singer Frenchy. Although it is technically based on the popular Western noir by Max Brand, almost nothing from the novel was used in the film. Stewart’s performance helped him fill out his everyman status and get Dietrich away from her box office poison status that surrounded her in recent years.

The re-release of the month is Jean-Pierre Melville’s French resistance thriller featuring Lino Ventura, Jean-Pierre Cassel, and Simone Signoret. On the run and ducking the secret police that wants them dead, the band of fighters must deal with the consequences of an informant as well as analyze what it means to sacrifice. Rejected on release because of the events one year earlier which many saw the film as a pro-Gaulle film (and de Gaule was unpopular then), it would not get its proper acclaim until after Melville died. Many critics – including this one – say it is Melville’s best film.

At the same time, as Czechslovakia’s freedoms were being crushed by the Soviets, director Juraj Herz took a stand with a dark comedy that attacked the totalitarianism being forced upon the country. Set in the 1930s as Nazi Germany knocks on the door of usurping it into their empire, a man working at a local crematorium begins to descend into madness when he sees his job as a way to look at the dying and roleplay their ideals. It was immediately banned and would not see the light of day until the fall of communism and is considered a masterpiece of the Czech New Wave.

Miranda July wrote, directed, and co-starred in this dramedy about two lovers (July and John Hawkes) who slowly take it to the next level in their relationship while his two sons and his neighbors, two teenage girls, begin their first feelings for sexual exploring. There are different subplots loosely connected, but July keeps them in check and equally intriguing with the comparisons of teenage and adult sexual desires. A nice gem tucked behind the rest of the growing indies of the decade, Roger Ebert would list it as number 5 of the best films of the 2000s.

Okay, this is the movie everyone wants because of Wes Anderson. His next film to get the Criterion treatment, it is such a Felliniesque stroke of genius, following the concierge and his lobby boy working with love, art, murder, and conspiracy set in the interwar years. But as a typical Wes Anderson film, the wit in every line said and the incredible mise-en-scene gives us such a unique adventure as we jump in time and go along for a ride through the hotel and its surroundings that, for a March release in 2014, stayed relevant for Oscar time with 9 nominations and 4 wins.