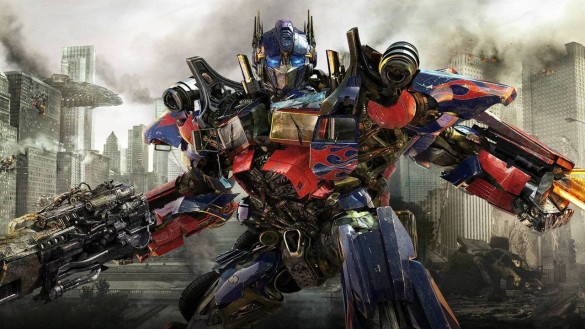 Synopsis: The Autobots learn of a Cybertronian spacecraft hidden on the moon, and race against the Decepticons to reach it and to learn its secrets.

DIRECTION
Michael Bay has received a lot of criticism of these films over the years, and while a lot of it is valid, Transformers: Dark of the Moon seems to get more than it really should. The film certainly has it’s fair share of Michael Bay-ism’s, which you may or may not like, but it’s certainly a better step up than Revenge of the Fallen. Dark of the Moon is darker and more serious but also injects a lot of fun action that you would expect and want from Bay. The visuals are more seamless than they’ve ever been and the camera is panned out to give us a bigger context of the battle. That being said, Bay continues to struggle in the editing room and the human characters seem lost as usual. However, if you can get past Bay’s humor and portrayal of women, the actual Transformers action is fun and enjoyable.

SCRIPT
The story opens with the U.S. in the middle of the Cold War trying to get to the moon, but not for scientific reasons, but rather something bigger than just exploration. We see Neil Armstrong and Buzz Aldridge on the moon, where they discover a huge ship full of dead robots, and thus we begin a deeper story within the Transformers Universe. The big problem with this film, is that the narrative is way too convoluted and unnecessary for a film like this. The human characters, once again, are forced and offer very little for those not invested in the franchise. Sam Witwicky feels entitled and is struggling to find his spot within this world, which ends up hurting his relationships, but means his choices carry more weight at the end. All in all though, these films aren’t fun because of the human characters, but rather the Autobots and their story. The Autobots are betrayed, in more ways than one, and should the script have been more focused on that, it would of worked much better and been more engaging. The turns it takes between the Autobots and Decepticons is much more compelling than Revenge of the Fallen and makes for an epic ending. It’s just a shame there’s no consistency within this franchise.

PERFORMANCES
Shia LaBeouf is more bombastic than we’ve ever seen before, which may turn some people off, but you gotta give him credit for going for it. His character feels lost without his Autobot friends and also in the middle of a new relationship, which LaBeouf carries heavily. If you don’t like it, to me, it’s more of a writing issues. The girl that’s not Megan Fox, Rosie Huntington-Whiteley, holds her own, but once again, writer Ehren Kruger didn’t know what to do with the character and it shows massively. Jon Turturro is on another level of crazy, but now with is new butler played by the wonderful Alan Tudyk. Just like with any other Transformers film, none of these actors are trying to win any Oscars, they’re just there. Julie White however, wins the award for being awesome and the most consistent. But like I said, this isn’t about the human characters but rather the Transformers themselves. Peter Cullen, enough said.

SCORE
Steve Jablonsky is the freakin man. The score here is easily the best part once again and enhances the fight sequences on a level that probably makes it better than what it actually is. His track, Battle, is arguably the best track outside of Arrival to Earth from the first film. The score throughout the entire film is high energy, the pace never seems to slow, and just blends in flawlessly. Jablonsky uses a lot of drums to keep the energy up, but still lets the strings be the center of the music. It’s also fresh and different from the first two, although it’s main themes are still embedded into many of the tracks.

FINAL THOUGHTS
Transformers: Dark of the Moon is a flawed film, yes, but it’s not nearly as bad as Revenge of the Fallen and takes major steps into the franchise. The final battle in Chicago certainly ups the ante big time and the building sequence is arguably Bay’s best visual piece. If Bay could ever figure out how to handle the human characters, this franchise would easily be on a different pedestal. It’s easily the worst part, but try to forgive and enjoy it for what it is.