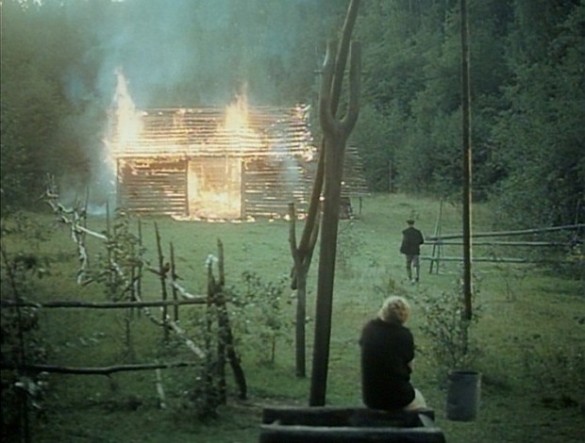 Synopsis: A dying man in his forties remembers his past. His childhood, his mother, the war, personal moments and things that tell of the recent history of all the Russian nation.

We finish off our Andrei Tarkovsky Movie Series with the film voted by our listeners for us to discuss; 1975’s The Mirror. Being a clear winner in our Tarkovsky poll, it was clear The Mirror has many fans, and is a film many hold very deeply in their hearts. As a result, I was truly excited for this one, and to get straight to the point (something Tarkovsky never does, and admirably so) The Mirror I would arguably say is objectively Tarkovsky’s best film, but subjectively it may be my least favorite of our 4-film series.

Describing the plot of The Mirror is almost impossible, especially when there really is no plot. Instead, The Mirror is a fragmented collage of memories and reflections, specifically those of a dying poet in post-war Russia as he recounts the memories of his family and experiences before, during, and after wartime. As a result, The Mirror is not really a movie, but that is in no way meant to sound like a negative. Instead, The Mirror is all about personal reflection, further mirrored (no pun intended) by the film’s autobiographical interpretation. The dying poet (Alexei), the “protagonist” of this film, is based on Tarkovsky’s own father Arseny, a poet himself whose work inspired many of Tarkovsky’s own films. The film uses history and newsreel footage to represent Tarkovsky’s own views of societal Russia at the time, regarding the effects of war and political unrest and the impact that has on children and even entire families. The film also features performances by Tarkovsky’s own wife and mother, even further reflecting its autobiographical nature. This results in what is arguably the most personal film in Tarkovsky’s filmography, and at times perhaps a little too personal.

With this in mind, The Mirror can’t really be reviewed like your typical film. But that isn’t to say there are still some objective ideals that can be touched upon. First off, like all of Tarkovsky, The Mirror is so beautifully shot that it becomes an immersive experience, almost ahead of its time; in fact, The Mirror has since become a huge visual influence on many music videos during the 1990s. The camera lens acts like its own mirror, capturing and reflecting the personal ideals that Tarkovsky wants to convey to his viewers who are willing to listen. But the cinematography is not just meant to reflect Tarkovsky’s own personal thoughts, and ultimately has a much bigger goal in mind.

The Mirror retains enough simplicity and ambiguity in its narrative (if you can even call it a narrative) that it becomes less specific in its ideals of personal reflection, and thus works to create a relatability factor and make the viewer part in their own form of personal reflection, as if you are watching one of your old family home videos. This is arguably why the film has struck a chord with so many of Tarkovsky’s fans, and its themes of family can certainly ring true to many, not just Tarkovsky himself. One of my favorite themes is demonstrated by showing the characters of Maria and Natalia (Alexei’s mother in childhood and wife in post-war time) played by the same actress; sometimes our views and perceptions of our own family carry on through generations, perhaps deep down we are afraid of change and want things to remain as they once were. But familial change is inevitable, though the familial root that ties us together remains planted, and thus The Mirror becomes one of Tarkovsky’s most poignantly themed films.

However, toward the top of my review I stated that perhaps The Mirror may have been a bit too personal. To be more specific…well, that’s exactly it; specific. The film addresses notions of Tarkovsky’s own specific views, his own specific family, and more generally, the specifics of Russian history and war. This is ultimately where I found myself slightly disengaged with the film, and even though its ultimate goal is to create a personal reflection out of its audience, I can’t help but wonder if the impact would have been greater on me had Tarkovsky leaned less on those specifics. The relatability The Mirror wants to create feels more limited than it does omniscient, almost as if Tarkovsky is really only speaking to a select group of people, thus becoming the only real problem I have with this film. But should this “disengagement” really be seen as a negative? Perhaps not, especially for a film that is not confined to the rules of a standard narrative.

To make a long story short, objectively speaking I find The Mirror to be a masterwork of personal storytelling, and of all the films in our Tarkovsky movie series I could easily argue having the most admiration for this film. Yet I can’t say that it is subjectively one of my favorite films in his catalog. My grade for The Mirror is not an objective one, but a personal one. But again, isn’t that the point of the film?