Movie Review: Louder Than Bombs is overly ambitious but moving 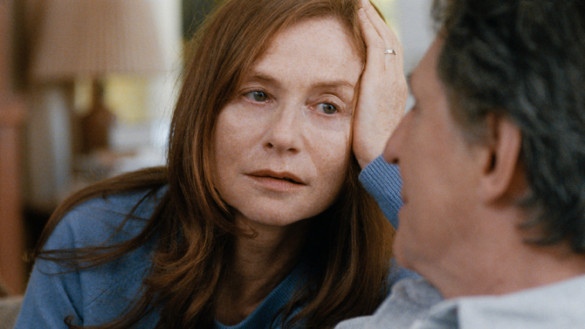 Synopsis: The fractious family of a father and his two sons confront their different feelings and memories of their deceased wife and mother, a famed war photographer.

(Back in 2013, this was the structure we used for our reviews, and I thought I’d bring it back. Let us know how you like or do not like it in the comment section below.)

DIRECTION
Joachim Trier’s Louder Than Bombs is certainly one of the more ambitious films of 2016, so far. The film’s structure is at times non-linear and Trier uses flashback montages as a way of reflecting the film’s pathos and thematic undercurrent. The romanticizing of depression, and potential suicide, is slightly off-putting and will leave some audiences disengaged but overall, Trier’s direction and artistic ambition does amplify the film’s strong emotion that linger’s throughout. Trier’s biggest fault, however, isn’t his ambition but rather his inconsistent ambiguity. The narrative purposefully restricts certain details to let the emotion of the characters be the main focal point, but through evocative narration, much of the film’s beautiful subtlety becomes rather suppressed. To be fair, the narration is expertly performed but it does juxtapose what was successfully working with Trier’s understated approach.

SCRIPT / THEMES
Most of the story focuses on Gene (Gabriel Byrne) and his two sons, Jonah (Jesse Eisenberg) and Conrad (Devin Druid), who are still coping with the loss of their mother/wife, Isabelle (Isabelle Huppert). Isabelle was a world-renowned war photographer who had been battling some inner demons when she was tragically killed in a car accident. Throughout the film, we start to understand that each member of the family is actually fighting for a way to cope, which leads to actions that render them all despicable at some point. However, screenwriters Eskil Vogt and Trier do a great job of balancing each character and making them honest and endearing on top of their juvenile behavior. That balance by Vogt and Trier works well in making each character feel more human and relatable as it relates to coping with death because you know their actions are rooted in heartache.

At the heart of Louder than Bombs, Trier is interested in how family isn’t always what it seems to be on the surface. We all have something to hide and while that can lead to disconnect, we still have a yearning for our family. We see how Jonah is wanting to understand Caleb. Gene is desperate to connect with Caleb and Jonah on some level. He is heartbroken over (ambigious) details he learns about Isabelle but that only fuels his fire for connection with is sons. In the middle of all of this, Trier introduces the notion that sometimes you can change an image to manipulate it’s meaning, which ultimately ties back to life and death and how that can be interpreted the same way. The family may or may not know all the details surrounding Isabelle’s death but her life can be remembered in a specific way depending on their interpretation. Trier brings this full circle by showcasing images of birth and death, which made for some arduous symbolism but powerful imagery.

PERFORMANCES
Isabelle Huppert is a stand out here. She’s not on screen a ton but her character is the centerpiece of most of the action and she delivers some potent blows when she is on screen. In one scene, after coming back to the U.S., some of Isabelle’s recent photos make it into a big story featured in the New York Times. Her and Gene are celebrating when Isabelle notices a man nearby glancing at one of her photos in the paper, but he briefly turns the page. For all of Isabelle’s ambition and sacrifice, it only took a second for a stranger to see the image and move on. There’s a close up on Isabelle that raises some heartbreaking questions about sacrifice and how far we are willing to go to distance ourselves from family in order to do something we love. And as rich as that is, it only works because of Huppert and her incredibly understated performance. That one scene alone brings understanding to how Gene, Jonah and Caleb respond to Isabelle. Speaking of, Eisenberg, Byrne and Druid are all terrific as well, especially Druid who makes you sympathize with his inner turmoil and why he acts out the way he does. It’s quite the performance from a newcomer.

SCORE / SOUNDTRACK
Ola Fløttum gets the nod to score here and the music is quite good. It brings a dourness to the film that serves the films tone very well but it also has heart. There’s a fine balance in the music that reflects the emotions of our characters very well and it lingers beautifully.

FINAL THOUGHTS
While the ambition of this film does come with it’s faults, Louder than Bombs is a film worth checking out if you’re a fan of emotion and how people can interpret that emotion is very different ways. The transformation of that struggle throughout is felt at the end and the final image of Louder than Bombs does resonate powerfully.