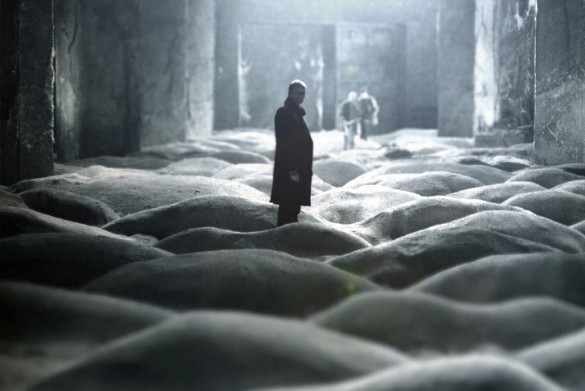 Synopsis: A guide leads two men through an area known as the Zone to find a room that grants wishes.

Stalker is the third film in our Andrei Tarkovsky Movie Series and it’s certainly the most existential we’ve discussed so far. Tarkovsky beautifully raises profound questions while building one of his most interesting worlds within his filmography. He brilliantly hides whatever the reality may be, thrusting us into ambiguity and mystery. Is this world real? Or symbolic? Of course Tarkovsky never answers that question but it lingers throughout in captivating fashion.

The films opens with a Stalker (Aleksandr Kaydanovskiy), a guide who can lead you through a protected area known as “The Zone, meeting with two individuals who only go by their professions, Writer (Anatoliy Solonitsyn) and Professor (Nikolay Grinko). As the three embark on their journey, we find out that “The Zone” has a special room that supposedly grants people their wishes. While the Professor’s motives are more secrete, the Writer is hoping to find answers that will lead to work that will last generations. However, “The Zone” isn’t an easy place to trudge through. The Stalker explains there are hidden traps everywhere and if you don’t respect “The Zone”, it will make you pay with severe consequences.

Stalker is arguably the most stunning film in Tarkovsky’s filmography (at least regarding the film’s we’ve devoured in our series), aesthetically speaking. Tarkovsky uses a specific brown and yellow color palette before the men reach “The Zone”, which cleverly depicts the mood of who these guys are before their journey. Once they reach “The Zone”, Tarkovsky switches over to a brighter, more green color palette which indicates their journey of seeking enlightenment and wishes. That style of approach blends well with the film’s themes of using symbols to reflect on the ideas it wants to explore and it’s simply breathtaking to watch at times. The cinematography also captures the notion of potential dangers along the way. There are abandoned buildings, hidden tunnels and pure isolation that gives the film a haunting ambiance that lurks at every turn. There’s a particular sequence in a wet, dreary tunnel that is eerie and gripped with stirring tension.

Tarkovsky succeeds wonderfully in his world building, as he always does, but his approach to the film thematically does fumble slightly. The questions he is interested in about humanity, hopelessness, symbols and our place in the universe, is thought-provoking and richly layered. However, the way Tarkovsky investigates those ideas is a bit too precise, muffling the film’s efficiency. It felt like he needed a vehicle to ask his questions and this world was good enough to do it. And because of that, there are moments where those questions feel out of place and are there just for the sake of asking questions. Granted, they are interesting and foster fascinating conversation but it doesn’t mean they work well with the surface level narrative. As a result, and ironically enough, the film isn’t as provocative as some of Tarkovsky’s other work where subtlety was more prevalent.

Despite that drawback, the film is quite alluring in it’s approach to faith and symbols, which is the heart of the film. Stalker wears the facade of a sci-fi film but in reality it is more about our ability as people to get lost in seeking desires that we think is best for us. However, sometimes we don’t know what’s best for us and our happiness is actually rooted in something deeper than what we can perceive for ourselves. And that kind of power, to reach the truth bubbling underneath the surface, seems to be Tarkovsky’s main objective. He particularly cares for how that effects people on an individual level, and he symbolically and physically shows us how our desires have real ramifications. The Writer, Professor and Stalker each experience that on some level and it’s devastatingly beautiful when we see the final results.

Aleksandr Kaydanovskiy, Anatoliy Solonitsyn and Nikolay Grinko each give gracious performances. Kaydanovskiy especially resonates the film’s emotion, which becomes potent near the film’s climax. Each performer brings something to the table though and Tarkovsky’s direction makes their actions feel more visceral. Some of the more philosophical dialogue needed better implementation but thematically it still holds weight. Stalker may not be Tarkovsky’s most dramatic or engaging film but it does feature some beautiful moments of tension and catharsis that makes for a satisfying experience.