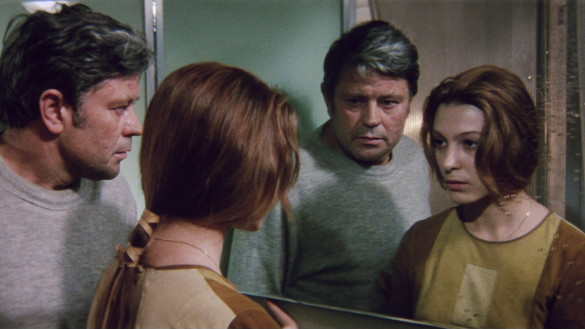 Synopsis: A psychologist is sent to a station orbiting a distant planet in order to discover what has caused the crew to go insane.

Andrei Tarkovsky’s Solaris may be a slow, methodical film but it’s one of the most compelling and thematically rich science fiction films we’ve ever seen. Tarkovsky’s vision is sharply focused on some rather fascinating questions and he doesn’t waste a single frame exploring those questions. Visually, Solaris is what you would expect from Tarkovsky. The imagery is beautiful and he somehow makes a space station seem more than just a blob of steel rotating in space. There is more exposition here than what you normally see from Tarkovsky but that exposition is important and he doesn’t lose himself in the world building, but rather let’s the characters emotionally play off of it.

Kris Kelvin (Donatas Banionis) is a psychologist who has been tasked to board a space station orbiting the distant plant of Solaris. He spends his last days on Earth reflecting on his life and is also visited by his friend and former space pilot, Henri Berton (Vladislav Dvorzhetsky). The two watch some of Berton’s testimony in court about a flight he once had on Solaris, which simultaneously works as a flashback to give the film it’s exposition. This causes some friction between Berton and Kelvin, as Kelvin is dubious about “issues” happening to pilots and astronauts who get near Solaris. Once on the space station however, Kelvin begins to experience his own struggles, which leads him into both professional and personal conflict.

The main conundrum of Solaris is one that I think most of us would struggle with and it’s probably something we’ve all thought about at some point. You see, Kris encounters a loved one on the space station even though that loved one never made the trip to the space station. In fact, this loved one passed away some years ago, adding to the mystery. All of a sudden, that conflict Kelvin had with Berton is changing it’s tune and Kelvin becomes consumed with figuring out this puzzle. This is what makes Tarkovsky’s Solaris utterly riveting. On the surface, it’s a dramatic and compelling story about a man who finds himself in a unique situation that highlights what science fiction is all about. At the same time, thematically speaking, there are rich and profound questions that are raised that elevate the film’s drama and tension. What would you do if you got a second chance with a loved one? Even if it was just a manifestation and not a real person? Would you just pretend it’s real even though you know it’s not? It’s a weighty question but it’s one that Kelvin must answer and it consumes him.

Kelvin’s dilemma also resonates due to Donatas Banionis’s performance, which is stark and bare in the beginning but grows to become devastating and emotional. Banionis skillfully depicts Kelvin’s brokenness, which does come off a bit cold but in a way of understanding he is a man who is hurting. By the end, you sympathize with Kelvin and echo the choices he makes. Natalya Bondarchuk is also a treat here. Her performance as Khari amplifies the film’s themes, while never feeling jarring to the surface level action. She’s exactly what this film needed. Jüri Järvet and Anatoliy Solonitsyn have solid supporting roles as well.

The film’s pacing will be a drudge for some audiences and perhaps Tarkovsky could have trimmed back a bit but the patience he demands has purpose. The imagery, details and spiritual beauty of this film will have a big payoff if you embrace that methodicalness. The romance will resonate deeper, the philosophical questions will be more robust and the emotional baggage depicted here will have more conviction by experiencing the full journey Tarkovsky offers. This is a personal film, one that is probably close to the chest of Tarkovsky, and it’s one you feel in every step throughout.