Movie Review: ‘Zola’ is Chaotic in All the Best Ways Possible 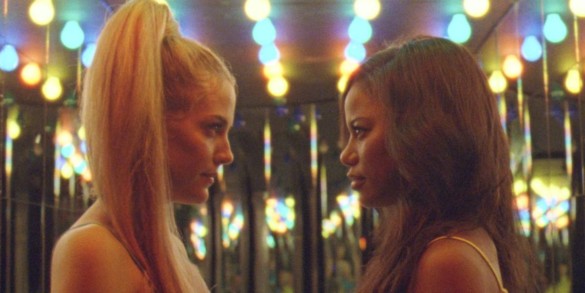 Synopsis: A stripper named Zola embarks on a wild road trip to Florida.

If you were around on the internet at all in 2015, you probably remember the iconic 148 tweet long Twitter thread about Aziah “Zola” King’s wild adventure on a trip to Tampa with another stripper whom she had just met. The thread starts with the recently meme-d phrase “Y’all wanna hear a story about why me and this bitch fell out? It’s kinda long but full of suspense” and only proceeds to get more excessive and bizarre from there. Talks for a movie adaptation of this wildly unbelievable but supposedly true story kicked off right away, eventually settling on Janicza Bravo to direct, as well as co-write the screenplay along with Jeremy O. Harris.

Zola is just as chaotic as reading the Twitter thread it’s based on in every best way imaginable, and sticks true to its source material even to a fault. The film does an amazing job balancing camp with the more intense and serious tone, leaving you laughing at how ridiculous everything going on is one moment, and on the edge of your seat two seconds later. It delivers believable characters, with strong, forward opinions on sex and power, and intense performances from the main trio, Taylour Paige, Riley Keough, and Colman Domingo.

Aziah “Zola” King’s story is enhanced largly for the big screen. She’s claimed herself in interviews since then that she may have embellished on some of the details in her long-winded tale. But the film fully embraces these moments and translates them to the screen exactly how you would imagine them, and often enhancing them as well. The soundscape envelops you to an entirely immersive experience, all while keeping at the forefront that this is just a story, with little tweets sprinkled throughout the film as a reference to the original thread each time they’re brought up. The score surrounding the events that transpire guides the viewer exactly through every rollercoaster emotion imaginable. A soft pulse pushes the intensity up to an eleven, and a dreamlike harp guides the viewer to a relaxing fantastical state. It’s most effective when the focus returns to Zola, helping provide context as to why she chooses to stay in situations that she could easily just get up and leave from. It provides Zola with a complex character of a woman who is empowered in what she does, knows her own worth, but also cares deeply about the well being of people, and what battles she can afford to fight when they’re presented to her.

Taylour Paige anchors the cast in the most subtle performance of the film. When surrounded by the messy characters she’s stuck with, she delivers insight to the real fear and danger that they’re forced at every turn. Paige is allowed moments to let loose similar to her co-stars, and as the narrator of the film she’s given some funny quips, but it’s the small moments that she suffers through that really translates on the screen to create such a dynamic performance. Riley Keough fully embraces the trashy white girl that she’s made out to be, and is the perfect foil to Paige, forcing her presence to be known to those around her with her loud and “main character” demeanor. However she also relishes in the brief bits she gets of quiet reflection, and you truly feel for her as you see her suffer from the abuse and manipulation she’s put through by her pimp. Controlling them both and at the center of all the trouble the two women experience is Colman Domingo, who is able to take an extreme character that could so easily be overdone, and make him into a threatening and terrifying force that leaves the characters Zola and Stefani trapped.

As a story about two strippers, the narrative obviously centers itself around sex. Janicza Bravo and Jeremy O. Harris find these nuanced themes in the tread that they so closely follow to shape the story and intertwine them into the character in a healthy and balanced way. Zola is convicted in her own ways, and loves to embrace her sexuality through the medium of stripping and dancing, but draws a firm line once someone else tries to force her outside of her boundaries. She isn’t judgmental to those who chose a different path than her but also knows the dynamics that sex and sexuality can have over others. “Pussy is worth thousands” as she says at one point. Sexual activities and their control over others is something that Colman Domingo’s character X knows as well, using it to manipulate Stefani into a never ending trap of pimping herself out only to have all her money taken away from her. It teeters a fine line between both the positives and negatives of sexuality in the world of sex work and outlines both the confidence and dangers that comes along with it.

Sometimes written using the exact words originally in the Twitter thread, the film is incredibly true to its source material, even when it starts to hinder the narrative slightly. The third act of the film starts to lag just a bit, but feels massive after the intensity of sitting through the first two-thirds. Unfortunately, the climax does not reach the suspense as promised by the opening tweet, but still manages to serve its purpose in emotional payoff. Shortly after, the film ends similar to the Twitter thread, almost anti-climatic and calm. As someone who’s read the thread, I wasn’t too put off by the abrupt ending that doesn’t try to create something more out of nothing, but it left my friend who I went with asking me “that’s it?” A sentiment I’m sure many will also experience.

Zola delivers chaos in the best way possible, and as someone who anticipated this film for over a year and a half since its 2020 Sundance premiere, I was nowhere near let down, and entirely satisfied. While this film reaches bold and extreme heights that seem unimaginable, it still feels as if it can’t boost itself to its full potential, or the same reach and wonder that left the internet in a frenzy on October 27th, 2015.