Movie Review: ‘Zero Fucks Given’ Tries to Access Too Many Ideas 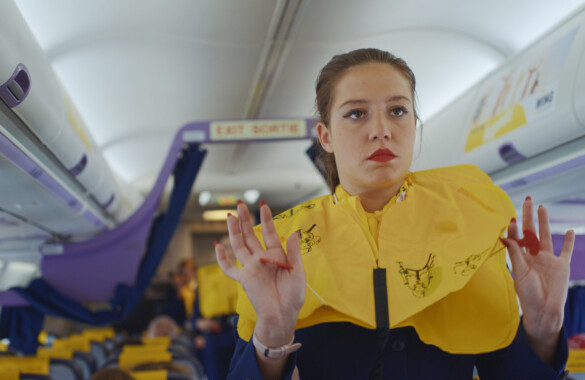 Synopsis: A young flight attendant loses her job at a low-cost airline.

There aren’t many films that capture the social-media drunk society that we live in today, especially for people in their mid-twenties and early thirties, quite well. In most cases, it comes off as corny, cringy, or even unrealistic (which is the biggest fault of them all). Filmmakers trying to capture today’s society shower the screen with their own annoying schmaltz and banal comedic lines that make you hate the characters being presented on screen. There’s no relatability factor attached to those features. Instead, they are fringed upon the margins of what it actually feels to live today – being detached from reality rather than creating a portrait of what that screen addiction has done to us all. We could spend hours naming all of the terrible examples. Still, instead, we should shine a light on a recent picture that finally got it right (to an extent, of course) by not focusing on the phone addictions but instead using such apparatus as a metaphor to build the narrative’s backbone. That film is Emmanuel Marre and Julie Lecoustre’s latest feature, Zero Fucks Given, which came off as quite a surprise as it is more thoughtful and profound than one would think.

With a brash and self-assertive title like that, you’d expect that it would dwell on the Gen-Z comedic antics that Quinn Shephard’s Hulu-hit, Not Okay, thrived upon.  Instead, its runtime is a constant intertwining of comedic moments of liberty (where parties are lively and drinks are often pouring) and ones of realism (scenes that take a grounded nature to reflect on your future). Zero Fucks Given offers slices of life while also making you laugh in the process because of its sincerity. The film centers around a young flight attendant named Cassandre (Adèle Exarchopoulos), who, like many of us in the past few pandemic years, has faced some personal difficulties. Cassandre is rapidly coming face-to-face with existential verities, which is why she spends most of her time up in the air rather than on the ground and complex questions that she can’t answer at the moment. Another reason why she constantly flies is that Cassandre doesn’t have anyone in her day-to-day life that she’s close to; other than her flatmates, whom she sees for only a few hours, there’s no one waiting for her.

Cassandre says to her co-workers that she has “no attachments” – spending her days dancing at clubs, indulging in the vodka of choice, or taking a trip to the beach. As Zero Fucks Given continues through its runtime, you start noticing that this is the life that Cassandre has chosen, but not the one that she wants. This escapist device serves as a coping mechanism for her, as she meets a wide variety of people in the places. Whether they are rude or not, she still holds her work in high regard because there’s nothing else on the other side back home. However, not even the elegant flight attendant suit and red lips can cover the dread and despair crossing through Cassandre’s mind. The veil is the smile she is forced upon; but on the inside, she is still in a mental battle of worries and anguish. Through her eyes, you can see all sorts of emotions – the ones she’s trying to conceal (burned out impassiveness) and the ones she’s being forced to have, as the customers aboard the plane can’t see you sad-eyed (the bright smiles of mile-high sales).

There are many ideas that the directorial duo of Emmanuel Marre and Julie Lecoustre are trying to explore. However, the film is most effective when it intertwines the draining effect of the companies’ inhuman systems (through the eyes of a fictional low-budget airline, Wing) with the longing and ennui of a young woman trying to get her life together – contemplating each and every one of her decisions and if, one day, she’ll make a move toward new professional heights. Most of us have had that job that drains us entirely from the moment we clock in to the end of our shift, as well as those days when existential angst gets hold of us. And Zero Fucks Given combines the two to have a deeper effect, especially for those in their mid-twenties and early thirties. Its first two acts revolve around a woman trying to hide her feelings, while the closing one acts as a pavement for Cassandre to try and bring out those emotions from their almost broken bottled container. It’s heartbreaking to see how she handles all situations arising from her work or family troubles while trying to conceal how she actually feels about them.

That’s a testament to Adèle Exarchopoulos’ performance and acting chops. Although her best performance might still be the one that kickstarted her career (Blue is the Warmest Color), what she has done since has forged her way to have acute line delivery, both in its comedic/charismatic lines and dramatic sequences, as well as an on-screen magnetism with her gaze. Zero Fucks Given may be structured by its plentiful layers of working-class subtext and the angst that comes with figuring life out, but Exarchopoulos is the backbone of his picture. Unfortunately, the film falters a bit in its pacing and the balance between the two main subjects. There are moments when it feels that Emmanuel Marre and Julie Lecoustre aren’t intertwining the two themes correctly when transitioning from scene to scene. This tends to be bothersome, mainly at the end of its first act and the beginning of the second. Still, after that, it flows particularly well because they are spending more time focusing on the emotional status of the lead character instead of the repetitive airline hardships she faces. Zero Fucks Given succeeds because it captures the existential irresolution that many people face nowadays. There’s a sensation of being incomplete, and the time spent during the pandemic devoured many souls into utter despair and feeling that aching loneliness even harder. I don’t know what’s coming next for Lecoustre and Marre, but I sure hope it is something around these measures.