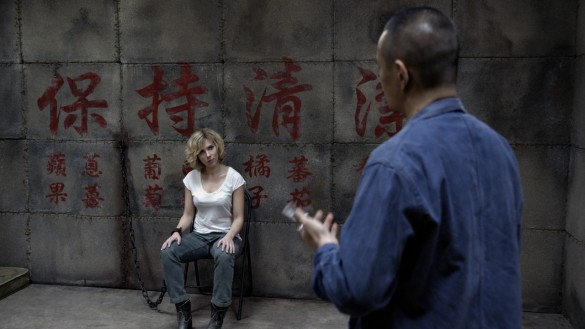 Synopsis: A woman, accidentally caught in a dark deal, turns the tables on her captors and transforms into a merciless warrior evolved beyond human logic.

INTRO
It is estimated that the average human only utilizes 10 percent of their brain – but what if evolution (or an accident?) accelerated things and you could access 20 percent, 30 percent, or more? Lucy is a very strange and weird film that explores that very idea of unlimited potential. The result is an absolute beautiful film and I’m not just saying because of the lead actresses. Lucy is what Transcendence inspired to be but this time around things worked out for Morgan Freeman.

DIRECTION
Luc Besson is the writer/director and that had me a little worried because Besson also wrote both 3 Days to Kill and Brick Mansions and directed The Family and The Lady, which are all horrendous movies. Besson here was able to compile a script that keeps you entertained with a balance of amazing visuals and solid action sequences, all under 90 minutes. No idea goes unexplored with Lucy’s superhuman powers and the beauty of it is that it works. However, issues that plague the movie in the beginning is the direction, or lack thereof. In parts where Dr. Norman (Morgan Freeman) is lecturing to a class about his brain capacity theory, there are cut-away scenes to animals or natural events that are used to facility what Norman is saying. I felt that the cutaways ruined the flow of the film and that they were unnecessary. Ruined but was not a huge deal breaker. I like how Lucy is portrayed in the beginning of the film though as she’s less intelligent than she really is because when the drug takes effect makes the transition more believable. Usually I do not discuss visuals and special effects in so much detail, but not doing so for this film will be illegal. Everything from the animals to the coloring was mind-blowing. Lucy gives us a few shots of inside the human body and having studied Cell Molecular biology in College I was in awe. Let’s just say the last 20-30 minutes is truly an amazing visual affair.

SCRIPT
Lucy is living in Taipei, Taiwan, and after a scuffle, she gets injected into the world of drugs and gangs, of course thanks to a guy. A drug is implanted into her and inadvertently leaks into her system and she slowly begins to unlock her brain’s full potential. The plot is pretty simple and what you get is in the trailer. As Lucy accesses more parts of her brain she seeks out the help of Dr. Norman. Although most of the stuff Lucy experiences is far-fetched, the way Besson explains the theories, the more the ideas seem plausible. One idea that I thought was extremely interesting was ideas that our perception of things are based on time and space. Interesting. That being said, despite how good a script is or how well it is shot, if you do not have the character element there than the film will fall flat. The characters and how they’re written into the theoretical narrative is well done for the most part.

RELATED: Under the Skin Movie Review

PERFORMANCES
Scarlett Johansson stars as the titular Lucy and she has proven that she can easily handle action movies so she was the perfect fit to play the titular character. Johansson didn’t have many action scenes but in the scenes that didn’t she was still able to carry the film with her voice and acting. Morgan Freeman is one of the few people who can make a narrative work-rather it’s about the brain or lemurs, Freeman gets its done.

SCORE
Eric Serra’s score works pretty well for the most part and adds a fantastic layer toward the end of the film, which is more visual than it is story. The score builds as the narrative becomes more about theory, adding some fun themes and tones that add to the experience. It’s not the best of the year, but it certainly works here.

FINAL THOUGHTS
Lucy is not a blockbuster by any means and I think its short running time may deter many moviegoers but in a time where we hardly have any strong heroines, Lucy is the next best thing.