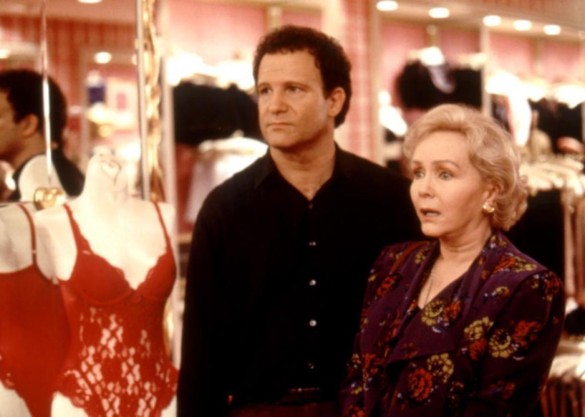 Watching a movie on the Criterion Channel comes with a pretty specific set of expectations. Basically, you are expecting the best of the best, right? But of course, film (like any art form) is wildly subjective. What I’m trying to say here, folks is that we finally have reached a movie for Criterion Crunch Time that I did not like one bit. Alright, that’s probably too harsh.  Anyway, we are talking about Mother this week. There are many movies named Mother that I have seen, but Albert Brooks made the worst one.

Look, I like Albert Brooks.  I think he is an extremely talented writer, director, and actor. Modern Romance? Defending Your Life? Sign me up for either of those.  But this? This is something else entirely. Like most neurotic comedies, you can sum up the plot pretty simply. In the case of Mother, novelist John Henderson (Albert Brooks), after suffering his second divorce, comes to the realization that this is because of his troubled relationship with his mother (Debbie Reynolds). So, to solve this deep-seated problem, he moves back in with her. You can almost smell the neurosis coming off the screen. Honestly, when you come off more immature and annoying than a Woody Allen protagonist, you have strayed from the path.

Now, this idea has some mild amount of promise. Especially with Debbie Reynolds in the titular role, there are many opportunities for fun to be had between her and Brooks. But Brooks is so maladjusted that he saps any amount of enjoyment out of the premise. Reynolds is game and plays her role perfectly. But in a family comedy like this, I think you need some level of likability. I ended up feeling much more sympathy towards Reynolds in having a son who would insinuate himself into her life without warning. There is nothing attractive or engaging about a man who blames literally everything in his life on his mother. Frankly, I kept thinking that he simply needs to grow up and move on. For this to work, the ending where these two come to a new understanding has to work like gangbusters. But it just kind of…ends? They come to this understanding mainly because Brooks says so. Yes, there is the fact that it ends up mother is a writer, too. But it just doesn’t work and kind of comes out of left field. More importantly, there is little to no emotional resonance behind this moment. But to be real, I was very happy that it was over.

Ok, so you might think, even if the main relationship isn’t satisfying, there must be some supporting characters that are entertaining. This is usually the case in a movie like this. This brings us to John’s brother, Jeff (Rob Morrow). Jeff is mother’s favorite, the successful son that John feels compared to constantly. If you thought John was annoying, oh man are you in for it with Jeff. Consistently whining, a stereotypical momma’s boy, Morrow’s performance is the literal only thing that can make you route for John. Mission accomplished, I guess?

Is Mother all bad? Not quite. Early in the film, before the plot of returning home is introduced, we are treated to John’s horrific dating life. Lisa Kudrow, playing a role that seems to be an obvious precursor to her Phoebe on Friends, is delightful. Of course, this role is designed to make you understand why his dating prospects are hopeless. After all, who could possibly date a beautiful person who thinks Charlie Chaplin is a writer and not an actor? To be serious though, there are some truly funny moments between them and, torturous as it may have been, I wish he would have stayed on that date.

In some ways, Mother is the most frustrating kind of movie. It has a decent hook, and you can see what Brooks is going for. But it definitely never comes close to earning its way through that premise. Because of this, every emotional moment feels completely hollow. I found myself wishing for a completely different movie. I would happily watch Debbie Reynolds interact with her retired friends in the supermarket or Albert Brooks fumble his way through dating after his latest divorce. But when these two worlds meet, almost none of it works, either comedically or dramatically.

As a note, again, I do like Albert Brooks! And luckily for you, many of his movies are on the service and leaving this month. This is your opportunity to choose one of them and have a great time. Obviously, I would not recommend making the choice that I did. Defending Your Life is an almost sure crowd-pleaser to begin your journey. But part of the joy of this column is experiencing movies I have never seen.  Some are great and some are Mother.

Join us next week for It Felt Like Love from rising star director, Eliza Hittman.