Movie Review: ‘Wife of a Spy’ is When Patriotism and Humanity Come Face to Face 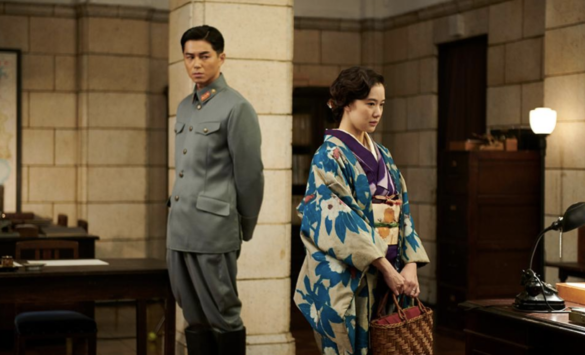 Synopsis: A Japanese merchant travels to Manchuria, where he witnesses an act of barbarism. His subsequent actions cause misunderstanding and legal problems for his wife.

Kiyoshi Kurosawa has created one of the most enigmatic and varied careers in Japanese cinema. While he started in horror, Kurosawa’s human interactions create tension and dread, and his latest effort, Wife of a Spy, isn’t different, even if it is a historic drama. Set during the Second World War and marking the first-period piece by the experienced filmmaker, this story explores an apolitical and guarded woman that reflects the naiveté and perdition of an entire country.

In 1940, the city of Kobe, Japan is going through the transformation of the starting war. Militaries are now marching around the city and locals are exhorted to wear traditional clothes and embrace the Japanese way of living, casting a harsh look on those that refuse. One of these rebellious people is Yūsaku Fukuhara (Issey Takahashi), a merchant that loves Western clothes, goods, and luxuries.

Having worked with a British silk merchant arrested under charges of espionage, Fukuhara captures the attention of Taiji (Masahiro Higashide), the leader of the military police and childhood friend of Fukuhara’s wife, Satoko (Yû Aoi). Satoko is an amateur actress that lives in an ignorant bliss. In a comfortable economic and social position, Satoko is naïve and girlish, somehow unaware of the big changes that are taking place in her city and country and determined to maintain this feeble stability.

The story is methodically presented. The Japanese filmmaker takes his time introducing the characters and conflicts. He is first focused on setting an expectant mood and, after a while, he presents the challenge that brings down the stability of Satoko and her perfect world.

Filmed on an 8K digital camera to be presented on TV, the cinematography by Tatsunosuke Sasaki is romantic and dreamlike, transporting us to the past. The production design is transformative, with Kurosawa using scarce but well-defined settings that shine through their details and elegance. Aoi and Takahashi show off exquisite tailor-made suits and dresses. Visually, Wife of a Spy is breath-taking.

Kurosawa offers a story of intrigue and treason in a way that cautiously reflects the Japanese evolution through World War Two and the following years. With the story of the Fukuhara marriage, Kurosawa confronts the traditional expectations of patriotism – that have been persistent in Japanese culture – with the idealism and determination of doing the right thing. Satoko goes through an evolution that reflects a country that naively got involved in a war, only to get to the other side completely transformed and destroyed.

When Fukuhara returns from a business trip to Manchuria, his relationship with Satoko changes. He is trying to protect her from what he saw there, but she is suspicious. Fukuhara discovered biological experiments in civilians led by the government. He is determined to expose this, even if that decision puts him in harm’s way.

In this crossroads, the married couple represents contrasting interests and ideals: his idealistic nature demands him to do the right thing, while she is determined to not be the wife of a spy that betrays his country. He wants justice, while she craves for security and political correctness.

Kurosawa continually introduces curveballs and unexpected actions. It is hard to confidently define the tone and genre of the film, going through many twists, revelations, and paradigm shifts. After seeing for herself the evidence that Fukuhara retrieved from Manchuria, Satoko goes through a massive transformation that feels dubious. Now she is determined to help her husband, a change of heart that presents a new source of distrust. The filmmaker keeps us on our toes. Satoko is so transparent and well-intentioned that apprehension is the only result.   We know that something will happen, but we don’t know how and who will be responsible for such a change.

Yû Aoi is the soul of the film, offering an intense performance. While her transformation from an innocent housewife to a scheming rebel has the potential of fulfillment, there is an air of distrust that never goes away and is left untouched. Kurosawa plays games with the audience through every character, with special emphasis on Satoko. Consequently, the final 15 minutes are unexpected, presenting the final blow that joins Satoko’s fate with Japan’s.

Wife of a Spy is a layered and subtle drama that carries more significance than what is initially seen. Through his beautiful and captivating visuals, Kurosawa presents an intimate story of awakening and treason that is equally passionate as heart-breaking. The filmmaker questions our values and expectations, demanding us to think about what it takes to make a stand and how much we are willing to risk for the protection of our values. Everyone is wearing a mask, provoking massive consequences on our main characters and their country.