Movie Review (TIFF 2021): ‘Lingui, the Sacred Bonds’ is a testament to sorority and female ties 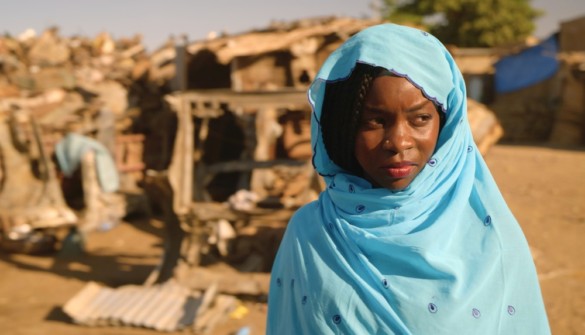 Synopsis: When Amina learns that her 15-year-old daughter Maria is pregnant and wants to abort the child, they face an impossible situation in a country where abortion is legally and morally condemned.

The first thing that you notice as soon as Lingui, the Sacred Bonds starts is its sun-kissed cinematography, capturing the beautiful aura of Chad. Photographer Mathieu Giombini makes sure to highlight the traditional dresses and the brown and orange colors that form part of the local landscape. Chad has never looked as bright and beautiful as it does in Lingui. This stunning façade echoes a story that is equally empowering as it is indignant and celebratory as it is condemning.

While the topics of abortion and reproductive rights have acquired a loud voice in American cinema during the last years with films such as Never Rarely Sometimes Always (Eliza Hittman, 2020), Unpregnant (Rachel Lee Goldenberg, 2020), and Plan B (Natalie Morales, 2021), Lingui takes a close look to these themes within a society that is much more limitative and condemning than the one from the West (even as Texas has gotten a terrible and recent setback in this endless fight).

With Lingui, Chadi filmmaker Mahamat-Saleh Haroun portrays the demanding and inhumane rules and expectations of a patriarchal society, as well as the subtle and resolute strategies that women design to survive. While the film critiques the Chadi patriarchal norms, it celebrates the sacred bonds (known as lingui in the local customs) between women.

The film presents the story of Amina (Achouackh Abakar Souleymane), a woman that creates vases out of rubber tires to support her 15-year-old daughter, Maria (Rihane Khalil Alio). One day, Maria starts acting weird and aloof. Amina discovers that she is pregnant, having been recently expelled from school to avoid a scandal. Determined to avoid a destiny like her mom’s – Amina got pregnant as a teen and was disowned by her family –, Maria decides to have an abortion.

In a country where abortions are prohibited by law and religion, Amina and Maria’s options are limited, as well as the people in whom they can trust. Haroun slowly and delicately takes us through the small and big obstacles that these women endure. Marina is courted by a long-time friend that highlights her feeble position in society as a reason for her to marry him. The hospital refuses to perform the abortion, instead referring them to a clandestine clinic. The local Iman constantly harasses Amina, scolding her for her absence at daily prayers as she designs ways of getting money.

Achouackh Abakar Souleymane and Rihane Khalil Alio offer captivating performances as mother and daughter. Souleymane goes through a whirlwind of emotions as Alio exposes a determined young girl that knows what she wants and deserves from life.

As the path to get an abortion becomes more complicated and desolate, Amina and Maria’s bond becomes stronger. Their difficulties pull them closer together and their relationship is even deeper from what it was at the beginning of the film. It is worthy of praise that Haroun’s script never alienates one from the other, even as the final revelations are gasp-inducing and infuriating. No matter what happens, their bond is never broken.

They also receive unexpected help and solidarity from the women of the community. Friends, recently reconnected family members, and considerate nurses and midwives offer them support. Mother and daughter are safe whenever they are surrounded by women, even if the external threats are as scary as ever. The mood and tone of the film contrast clearly whenever there are men and women on screen. Lingui offers a glance at the creative ways in which women navigate the difficult norms of their country, strengthening their relationships along the way through their shared secrets and strategies.

In Lingui, the Sacred Bonds, Mahamat-Saleh Haroun presents a film of resilience and determination. He carefully exposes the many ways in which women are abused of in such a traditionalist country while celebrating their strength. The story of Amina and Maria shines through their unbreakable bond, as they are embraced by other women that understand their struggle and pain. This film works as a social commentary, and as a testament to the strength and unity of the female community.