Movie Review: ‘White Boy Rick’ never seems to get off the ground 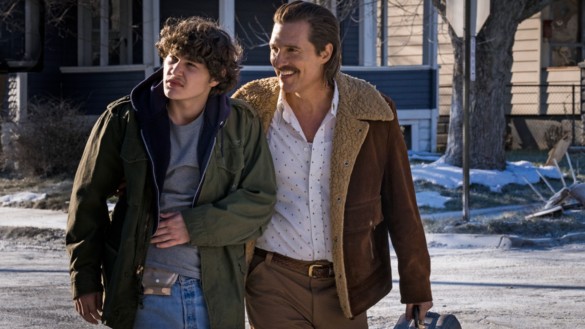 Synopsis: The story of teenager Richard Wershe Jr., who became an undercover informant for the FBI during the 1980s and was ultimately arrested for drug-trafficking and sentenced to life in prison.

There is realized potential.

Then there is A Failure To Launch.

The irony is the actor who co-starred with Sarah Jessica Parker in the aforementioned 2006 film is one of the biggest ailments afflicting the success of White Boy Rick (in theaters now). While Matthew McConaughey might be the biggest star in this cast, his inability to allow others in the cast to shine impeded the overall quality of the piece. One would have thought the Oscar winner was playing the title role based on any number of clips Lionsgate publicity made use of in the trailer.

If the idea of the film is to tell the rise of the biggest narcotics trafficker in the history of Detroit then do just that and back away from focusing so much on his father. Screenwriters Andy Weiss and Logan Miller are so enamored with filling in all this exposition that they neglect providing any development for Ricky (played by Richie Merrit). Why provide a cursory look at a figure who is for lack of a better way to describe him fascinating? White Boy Rick is just one wasted moment after another culminating in a rush third act which seeks to immortalize this man.

Director Yann Demange’s latest project is irregularly paced and never truly achieves the type of focus needed for this tale to be effective. Some moments are incredibly slow and tedious (how many times do we actually need to be at the skating rink) while others are incredibly rushed bordering on a blur. There happen to be some noteworthy performances which are overshadowed by a menagerie of missteps. Bel Powley portrays Ricky’s sister Dawn and her mixture of guilt and addiction is devastating on screen. Merrit is solid as well but is overshadowed throughout the film by McConaughey’s over the top performance. Had there been any semblance of a consistent balance between the cast and source material, White Boy Rick would have been a better film overall.

Max Richter’s score didn’t inspire any confidence in this tale. Tat Radcliffe’s cinematography didn’t do the film any favors by making use of a dreary color palette. Radcliffe’s decisions were perplexing at times. Why wasn’t more of an effort made to show how destitute the city was? White Boy Rick at times is a mess and those fleeting moments where the narrative progresses, elicit little reaction from the audience.

What they should have done is recast the role of Rick’s father. Having the Oscar winner in this role is a disservice to the rest of the cast. Secondly, Lionsgate should have retooled the film with a focus on the evolution of Rick. What drives a child to want to become the biggest drug kingpin in Detroit? Was it the families socioeconomic status? From that launching point, you could have had one hell of a movie.

Overall, there are so many options at the box-office which would allow anyone to avoid subjecting themselves to White Boy Rick. However, if anyone reading this has some burning desire to see this then just watch the trailer as most of what works is in it and that’s never a good sign.