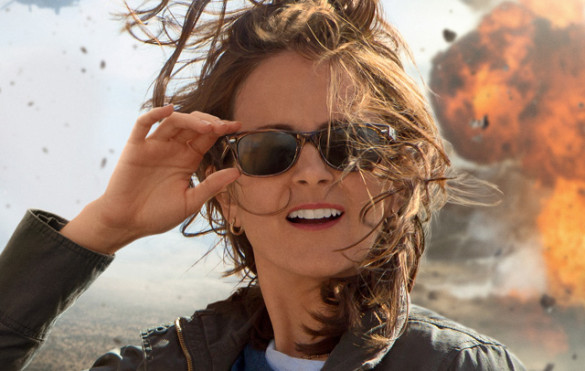 Synopsis: A journalist recounts her wartime coverage in Afghanistan.

To preface this review, my thoughts on Whiskey Tango Foxtrot are in no way a reflection of Kim Baker herself, who wrote the novel of which this film is based (“The Taliban Shuffle”). My thoughts are instead a reflection of the film we were given, the film I saw on screen, and the film I found quite a few problems with. I have no doubt that Kim Baker’s story is a heroic one, and absolutely one worth telling; the film here certainly explores those notions that are worthy talking points, especially when considering the film’s setting, it’s just too bad that the script is a case of too much too fast, a failed attempt at bringing all those elements together in a consistent whole. “WTF” is certainly accurate.

Whiskey Tango Foxtrot tells the story of reporter Kim Baker as she recounts her experiences while on a 3-year stretch in Afghanistan.  Here she interviews various marines, makes friends, learns about the culture, and ultimately finds herself. Baker learns to have a dedication and care for the conflict overseas, and her growth onscreen is noticeable. But as the film starts to jumble many more characters (some who feel so unnecessary) and thematic notions, it becomes a jarring experience of a war film that feels as if the film is at war with itself.

Glenn Ficarra and John Requa, whose directorial resume is quite diverse (ranging from the “lovely” I Love You, Phillip Morris and Crazy, Stupid, Love, to the ironically out of focus Focus), are not to blame here. In fact, their vibrant direction and energetic pacing helps in creating a film that is never boring, and one that indeed has both comedic and human moments. These moments, however, are not enough to make up for Robert Carlock’s overcrowded screenplay, one that both constantly shows and tells but without the proper discipline in choosing the most important aspects to focus on. This creates for a film that is thematically trying to address femininity, our culture’s ignorance to the conflict in Afghanistan, the consequences of wartime journalism, striving for a change in your life, with even more notions sprinkled on top of that. The notions of feminism are strongest, especially considering this culture where many women aren’t even allowed to show their faces, but it becomes drowned in an incredibly crowded film, both crowded thematically and narratively, and that makes it all the more frustrating. It isn’t surprisingly that Carlock’s previous work is that of television comedy (he was a creator on the show Unbreakable Kimmy Schmidt), and it may have become a simple case of inexperience.

With that said, Tina Fey is absolutely amazing, and gives a legitimately great performance in this film. Her chemistry with Martin Freeman (a character who isn’t well introduced but grows well into the film) is incredibly, and that maintains the film’s heart and soul when it is needed.  Billy Bob Thorton and Alfred Molina are slightly wasted in their respected roles (especially Molina, who has this awkward dance scene that feels just so out of place), and as much as I love Margot Robbie I can’t help but feel like her character could’ve been taken out of the film completely and it would not have changed a thing. All that said, don’t forget about Christopher Abbott, who plays Baker’s guide and translator Fahim, whom I would call the unsung hero of this film, at least dramatically.  Whiskey Tango Foxtrot throws too many explosive mines into an already tight field, which results in it blowing its load either too much or too often. And despite some great moments, worthy themes, a worthy story, and a great central performance from Tina Fey, this film left me saying “WTF” more often than I should have.