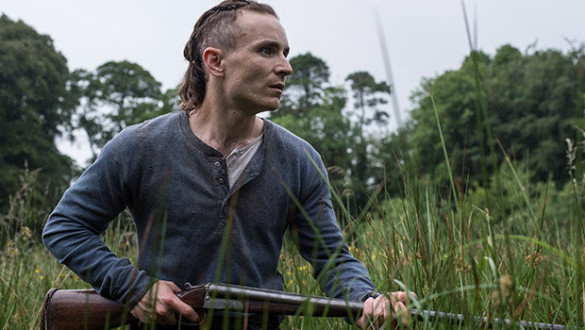 Synopsis: In a time of starvation, a survivalist lives off a small plot of land hidden deep in forest. When two women seeking food and shelter discover his farm, he finds his existence threatened.

Stephen Fingleton’s directorial debut, The Survivalist, shows strong signs of promise for an up and coming director. Fingleton’s direction is arguably the strongest aspect of the film, taking advantage of his budget restraints by confining all the action to a single location. Fingleton keeps the tension between three main characters, focuses the story on their isolation and does a good job of making the world aesthetically visceral.

The Survivalist takes place sometime after a global collapse where starvation has set in and one survivalist (Martin McCann – he has no name) is living off of a small plot of land hidden in a forest. He is eventually met by Milja (Mia Goth) and Kathryn (Olwen Fouere) who are looking for food and shelter. Trust is in short supply and tension between the three start to rise as both parties are unaware of long-term motivations.

Some post-apocalyptic films are so concerned with exposition that it restrains the story with convoluted details, however, Fingleton isn’t interested in any of that. Instead, Fingleton shows a simple graph that shows the audience how oil production rates and the world’s population rose and plummeted congruently. Once that set-up occurs, Fingleton rightly leaves that behind for the story in front of him, in which he captures with a beautifully, arduous style. The cinematography is arresting, using the forest and natural landscapes to viscerally enhance the feeling of isolation The Survivalist is depicting. There is one shot in a field that could go down as one of the best of the year. The camera is placed just above our characters, to give a unique perspective on the situation, and moves fluidly in one motion which gives us a larger scope of what’s at stake in the scene. It’s riveting filmmaking.

As captivating as Fingleton’s direction is, his script here is a different story (ahem). The film restricts dialogue and tries to convey it’s messages through gripping imagery, however character engagement is sacrificed by stripping back that dialogue. While the images themselves are great, they are not enough to flesh out the characters and their psyche. You don’t need to go overboard with dialogue to get your point across, and it’s clear Fingleton wants to tell his story visually, but the lack of character depth stifles the film’s cathartic turn. Simply, we just don’t know these characters well enough for the ending to feel earned.

Thematically speaking, the ending is quite powerful and has something wonderful to say about hope. But I’m not sure the sequence completely works because it’s hard to engage with when you feel distant from the characters in that moment. Still, an affable notion with some merit. That said, there are other notions here about our desire and need for intimacy, even when the world has gone to hell, that is warranted and fascinating within the context of this film. Most, if not all, post-apocalyptic films are more concerned about survival itself but Fingleton is just as interested in how our sexuality doesn’t go away just because things suck now. We see how the survivalist survives by growing food and gathering water, but there are other physical needs that have to be addressed as well. And while perhaps gratuitous at time, that idea is explored in alluring fashion.

Overall, while the narrative structure does fumble a bit and the characters needed to be fleshed out more, The Survivalist is a compelling watch that does have something unique to say given it’s genre. Fingleton is a director we should be on the lookout for, as we do see his potential here. His dynamic direction takes advantage of his limitations and it makes for a mostly fun cinematic experience.