Movie Review (Sundance): ‘Violation’ is an Unsettling Tale of Vengeance 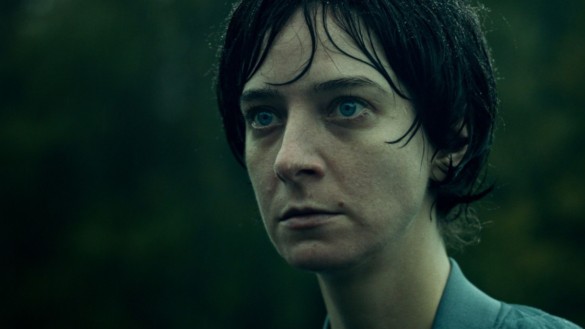 Synopsis: A woman on the edge of divorce returns home to her younger sister after years apart. Following a transgressive act of sexual violence, she embarks on a vicious crusade of revenge.

When Miriam (Madeleine Sims-Fewer) arrives to her estranged sister Greta’s (Anna Maguire) cabin in the middle of the forest, the tension can be felt in the air. Things are not going well between Miriam and Caleb (Obi Abili), her husband. In addition, there is a distance between the sisters that is highlighted by the seemingly perfect relationship between Greta and her cool husband Dylan (Jesse LaVercombe).

Miriam seems to find the perfect ally on her brother-in-law, the only one that is seemingly at ease with her, developing a playful and friendly rapport throughout the weekend. They walk around the forest, make jokes, and even stay up late by the fire talking about very personal issues. Nevertheless, as we learn slowly throughout the movie, something unfathomable happens that creates a dark and heavy cloud over Miriam, driving her into a ruthless storm of vengeance against Dylan and consequently, her sister.

This is the premise of Violation, the directorial debut of constant collaborators Madeleine Sims-Fewer and Dusty Mancinelli. These filmmakers found in the movie the possibility of pouring their trauma and their need of catharsis, after becoming survivors of sexual assault. While it starts as a family drama focusing on the strained relationship between Miriam and Caleb, and Miriam and Greta, it slowly and slyly evolves into a story of trauma and sexual violence.

Through an innovative style that keeps us guessing, and a resoluteness to show on screen intense scenes of violence and gore in an uncensored fashion, the directors created a haunting portrayal of radical actions and complete fracture. Wisely, they use a non-linear narrative to present the facts, combining the scenes of the transgressions against Miriam with her extreme solutions to start healing. As we witness her making unfathomable things, the narration jumps back in time to show us the trauma that drove her to this. Both moments, past and present, or present and future, create a harrowing juxtaposition of a terrible reason with a desperate consequence.

This is not an easy watch. Interestingly enough, the violence that is presented is not the one that is expected. Rather, Sims-Fewer and Mancinelli maintain the dignity of Miriam in every scene of the movie, focusing on her eyes, hands, and hair when her violation occurs, while uncovering the male characters in an unrestricted way. In front of the camera, the male body is completely defenseless.

The script confronts in a radical way today’s rape culture, including the façade of nice guys, the gaslighting and manipulation of survivors, and the people around the perpetrators and victims that continue to feed the circle of abuse and lack of accountability. These topics acquired a special notoriety with the release of Promising Young Woman, a movie that inevitably invites comparisons considering how differently they tackle the same topics of sexual assault and revenge.

While Promising Young Woman feels tamed and stylish, Violation feels drastic and overwhelming. It would be difficult to conclude that either of these movies provide a satisfying ending for the main characters, showing that the topic of sexual assault is much more complicated and desolate in real life.

Considering that Sims-Fewer and Mancinelli base their movie on real feelings and experiences, their point of view is deeply appreciated. The violence that is presented has its merits. Although too graphic and traumatic, it works as an extreme representation of sorrow and destruction. Miriam goes through a drastic transformation as direct result of her trauma and the answer she receives from those close to her. Regardless of what she does, she remains humane and sensible. The script makes sure that the audience understands the enormity of her actions and how much they are demanding of her. This depth of consciousness is weirdly tackled on revenge features.

Violation is an unsettling tale of vengeance exalted by haunting chants and a gloomy cinematography that enrich the feeling of tension. Through a harrowing script that effectively portrays the loneliness of a survivor, the movie presents an unforgivable act only toppled by another that is even worse. The results feel too intense. Too alienating of a victorious feeling. Still, the boldness and gumption of the story create deep shock and invite introspection. In a topic like this, there are no easy answers.