Movie Review: ‘Venom Let There Be Carnage’ is Better Than the First Film, Which Isn’t Saying Much 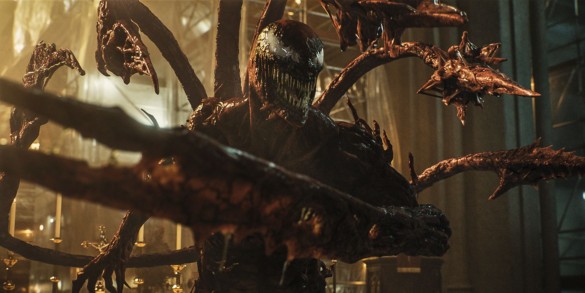 Synopsis: Tom Hardy returns to the big screen as the lethal protector Venom, one of Marvel’s greatest and most complex characters.

The time has finally arrived. The sequel to the film Venom that made over a billion dollars in the box office is out in theaters and after multiple delays due to the pandemic, fans are at long last able to see their favorite symbiote alien confront his own kin (literally). Truth be told, the first film left an unpleasant taste in my mouth and I was not looking forward to the sequel. I kept thinking to myself, “How could you make a Venom movie without Spider-Man?” I couldn’t grasp the concept because much like there is no Carnage without Venom, there is no Venom without Spider-Man. Fortunately, Venom: Let There Be Carnage does succeed in some ways that the first film was lacking. However, there is still much to be desired in this needy attempt of a sequel.

I think there is a lot to be said when the mid-credit scene of a film was your main takeaway from the story. I went into this film with an open mind and wanted to be proven wrong. What I received was a film that was a cut above its predecessor. The pace of this story was miles better than the original. It felt like they wasted no time getting to the meat and potatoes of the plot, and with a run time of an hour and thirty minutes, they hit the mark. But there were some moments where I felt like the plot was moving a hair too fast, and I think the editing had a lot to do with the pacing. The transition in certain scenes seemed out of place, and there was no gradual build-up to the climax. This movie takes place a year after the first film and does a poor job at recapping those events. I don’t expect the film to take too much time rehashing those events but a small recap would have been nice for those who have not seen the first installment.

Woody Harrelson delivers a phenomenal performance as Cletus Kasady. Even though I think that Woody’s age would hinder his performance, I’m glad I was proven wrong. He was everything that a sociopathic serial killer should be and his presence on screen matched that of his counterpart in the 90’s Spider-Man animated series. I adored how they decided to show Cletuses backstory. Even though it was built for exposition, I enjoyed the animated short transition they went with his character. Showing an abridged version of his back story gives a better insight as to why Cletus and Carnage are a match made in heaven. Carnage was done justice in this film. He was unforgiving, ruthless, and monstrous. His roar was that of a prehistoric dinosaur and had a specific presence to it that demanded attention. It sent a chill down my spine with each passing cry.

The CGI in Venom: Let There Be Carnage is leagues better than the first film. There are two big fight scenes in the third act and it was a breath of fresh air to identify who was who. The detail of Carnage was pretty impressive. In the comics, he has a full arsenal of weapons and you see that play out well as he runs rampant through San Francisco. Tom Hardy and Michelle Williams have great chemistry as always. Their line delivery is of an old divorced couple who still care for each other in a platonic way. The relationship between Eddy and Venom was lackluster for most of the movie. It felt like they were younger siblings throwing a hissy fit because they didn’t get their way. And it felt repetitive up until a certain point. They are supposed to serve as lethal protectors and what we go for the majority of the movie was a classic case of bickering bothers.

Venom: Let There Be Carnage is a merrymaking ride of a film that shouldn’t be taken seriously. Unfortunately with each passing improvement, there were two more negative issues that took their place. The fast-forward pacing was a nice touch to an extent and most of the jokes did not land well with me at all. Woody Harrelson surprised me in this role and was a convincing supervillain who commanded a great screen presence. With all that said I do encourage viewers to stick around for the mid-credit scene. I promise it’s something you won’t want to miss.