Movie Review: ‘Uncorked’ packs in plenty of laughs and a ton of heart 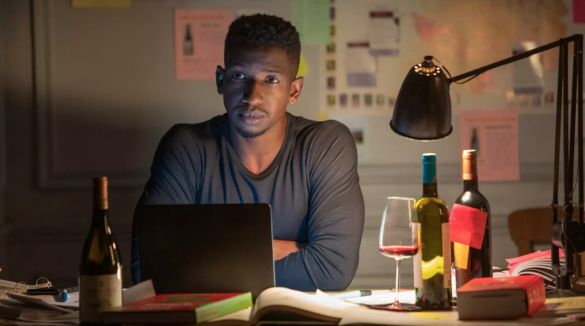 Synopsis: Elijah must balance his dream of becoming a master sommelier with his father’s expectations that he carry on the family’s Memphis BBQ joint.

Prentice Penny adds a new swill to his film catalog with the Netflix Family Drama, Uncorked. It’s like Soul Food, but for a new generation. A unique blend of food, wine, and music that’s not as complex as the wine trials Elijah (Mamoudou Athie) endures in his pursuit of becoming a sommelier, but equally flavorful in the bouts he has with his father Louis (Courtney B Vance) who envisions a different path for him.

Elijah’s had a lot of different passions and Louis has possibly indulged them to a fault until it’s time for his son to step up and take over the family BBQ business. Elijah’s desire to become a Master Sommelier thwarts his dad’s plans and puts a bigger strain on their already rocky relationship. The narrative in this film penned by Penny is a unique approach to the type of story I was sold. It embraces the black experience through differing perspectives yet is so relatable on both sides. This film isn’t bothered by pointing fingers and assigning blame for the differences these 2 have but offers a nuanced and rising empathy from both men.

Athie and Vance have impeccable chemistry. Their relation feels authentic to who they were written to be. Additionally, Athie wouldn’t be the conventional choice to lead this film, but I’m happy he did. He wins you over quickly with his naivety with women matched with a quirky charm. He disarms you with his soothing voice and his presence as well. He’s still quite young in his career, but a performance like this makes way for much to look forward to.

This refreshing father and son tale is set to the back drop of Memphis, TN and Paris, France that infuses many of the sights and sounds that make these cities distinct. I was impressed by the camera work throughout the movie and how it glided through the city streets in a way that made these settings lived in and become characters themselves in the story. The films aesthetic is cool and just as colorful as its many other supporting characters. None more colorful than Niecy Nash, who turns in a career best performance in my opinion. She still exudes a powerful sass but with a honed vulnerability that comes out when the story needed it most.

As with most dramas that try to balance pacing with comedy, there are hits and misses. Luckily with this film there’s less of the latter. The screenplay has some of the most naturally comedic lines written and delivered for a drama I’ve seen on the screen in quite a well. However, there is a side character that quickly becomes a joke unto himself that runs on entirely too long and unfortunately sticks around for the entirety of the film. Putting him aside, this makes for an introspective stream at home with the family.

You may have thought this was your run of the mill Springtime comfort movie primarily for black audiences. You couldn’t be farther from the truth. We have a universal story that at one point or another in our own lives we may have tackled. Characters at a crossroads between family and career; or on the other side feeling left behind when new alternatives in life challenge your cultural lens. This screenplay is tight, packing in lots of laughs and a ton of heart. Did I mention its pretty inspiring too?

I promise, you’ll never look at a bottle of wine in the same way either!