Movie Review: ‘Triple Frontier’ gets too greedy with its narrative 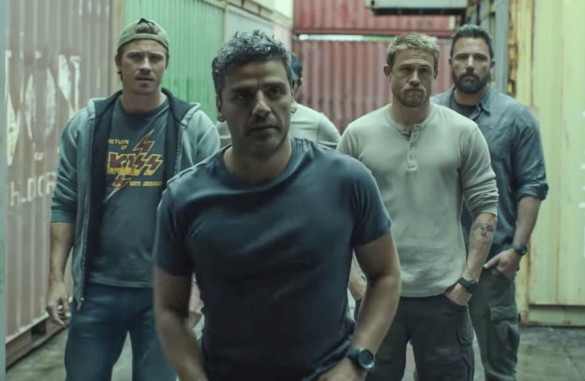 Netflix’s new film Triple Frontier had me intrigued before I saw a single frame. Any film with Oscar Isaac in it already has my interest, and say what you will about Ben Affleck, but it’s clear that he is a talented actor and filmmaker. And this film is only getting started with those two. The film is produced by Kathryn Bigelow and Mark Boal, and Boal provided the story of the film as well as co-writing the screenplay with director J.C. Chandor. Then the cast is filled out nicely by Garrett Hedlund, Charlie Hunnam (those two have always seemed to be twins to me), and Pedro Pascal among others. It’s a star-studded lineup of talent both in front of and behind the camera. I wonder if that is why the film bites off more than it can chew.

You may think that this is going to be a war film. It is that, in some ways. But early in the film, when William “Ironhead” Miller (Hunnam) is giving one of his many motivational speeches to a group of reservists, he talks about the biological and psychological impacts of going to war. He says that taking out that level of violence against other human beings sticks with you. At that point, you realize that this film is going to go in different ways than you might expect.

After that speech, Miller is approached by Santiago “Pope” Garcia (Isaac) about a possible job. Garcia has been working in South America to apprehend drug lord Gabriel Martin Lorea (Reynaldo Gallegos). He has a contact named Yovanna (Adria Arjona) who has infiltrated Lorea’s operation, providing a window for a possible takedown. He needs a team that can go in on a reconnaissance mission to confirm. For this, he goes to his old friends.

Ironhead says he’s in only if “Redfly” is in. That would Tom “Redfly” Davis (Affleck). He is now working as a real estate salesman. He is recently-divorced and, though he attempts to hide it, the situation is taking its toll on his life. He seems reticent at first, but after Benny Miller (Hedlund) and Francisco “Catfish” Morales, Redfly finally gives in.

All of the main members of the cast give fine performances, except for Affleck. As I said before, he is certainly talented, but he seems to be phoning it in here. I thought Isaac was good, as usual, but Hedlund gives the film’s best performance. They do have a certain team chemistry that is necessary in a film like this, and what success the film has certainly comes from their performances.

I think I preferred these early scenes because they were narratively-focused. Here the film is all about setting up its characters and the notion that the country these men fought for has taken advantage of them. The way our country treats its veterans is deplorable in many ways, but this film goes deeper to showcase the ways this impacts the psyche of a person. These men served voluntarily, and they were proud to do so. Yet, the fact remains that the prime years of their life have been spent, and they don’t have much to show for it. One character makes a comment that, in another profession, their service and skill set would have set them up for life. As it stands, they all struggle to make ends meet.

Part of the draw of the reconnaissance mission is that it will pay well – $17,000 for a week’s work. They mention that the skills they learned in the military are what they have. They might as well get paid for using them. These are the notions that really interested me – the psychological aftereffects of war and how one might go about managing them. But from there, the film gets pulled in other ways.

Once they get to South America, they quickly begin to realize that Garcia did not give them the full story. The reconnaissance mission unearths that his real plan was to rob and kill Lorea using their small team. It may sound preposterous at first, but these men have this work in their blood now. War has done that to them. They decide to move forward. Here, the film that Triple Frontier could have been reaches out one last time for a more psychologically-focused narrative. But it does not win out.

From this point on, the film becomes a tactical mission tale and a step-by-step showing of how you attempt to move millions of dollars through the Andes Mountains. I won’t deny that it is interesting and action-packed, it just pulls the film in too many directions to be successful.

While they are carrying out their mission at Lorea’s compound, they find his incredible fortune in a place they hadn’t planned on. They also find more money than they were expecting. They came in with a plan for how much time they had to carry out the mission. The end time is a “hard out.” Redfly makes a crucial mistake by attempting to get every last bit of cash that they can. This has drastic consequences for the rest of the film. It reminded me of the scene from Heat when Vincent Hanna is describing the team of criminals led by Neil McCauley. As they survey the crime scene, Hanna points out that the criminals left some cash. He says they knew how much time they had, and they didn’t waste it. Redfly makes the opposite decision, and it costs everyone.

There is a story of the cost of greed somewhere in here, in the vein of The Treasure of the Sierra Madre. While the film reaches for those lofty heights, it does not achieve them. Again, this is where I felt that Triple Frontier suffered from narrative overload. It’s trying to tell stories about the way America forsakes its veterans and how it fights imperialistic battles in other lands. It’s also trying to tell a cautionary tale about greed. And it’s also trying to portray the action-packed tactical missions of America’s trained military professionals. Finally, we get the admittedly fascinating story of how you would go about moving massive amounts of cash through mountainous South America. Now, I am *not* saying that a film must stick to one story or narrative. I love many films that combine lots of threads and tell multiple stories. But those stories must be earned. And while saying a film hasn’t “earned” its narrative is becoming #FilmTwitter cliché, I think it fits here. I felt that the psychological elements of the film’s early scenes were abandoned too early, and the threads the film follows from there were not set up adequately.

However, the remainder of the film is still quite exciting, even if somewhat hollow. The acting performances are enough to keep you intrigued, and the story finds interesting moments of action and suspense. But I couldn’t shake the feeling that Triple Frontier itself makes the same mistake as Redfly – going for more when it already had a fortune.

Hear our podcast review on Episode 317: