Movie Review (Tribeca Festival): ‘Do Not Hesitate’ Exposes the Intimate Repercussions of War and Violence 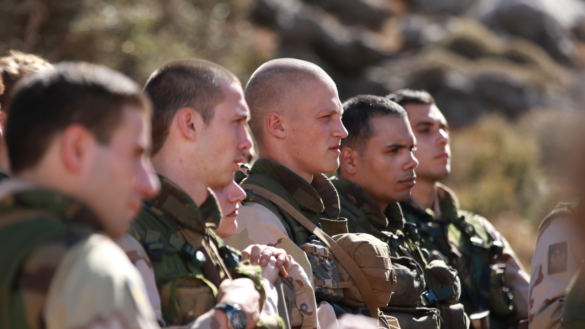 Synopsis: A truck carrying a Dutch military convoy on a peacekeeping mission breaks down somewhere in the desert. As a group of soldiers waits for a repair team to arrive, they encounter a local boy who refuses to leave.

There is something intimate and private about Shariff Korver’s latest effort, Do Not Hesitate. While it tackles a well-known, albeit tiring topic, the trauma of armed conflict and violence from a Western point of view, he does it in a way that feels novel and affecting, bringing quietness to a genre that is usually loud and hyperactive. This film focuses on the confrontation of a few within the massive scope of war. Its context may be an armed conflict and the efforts of restoration, but the film is stripped of this massive weight to present the minuscule and immediate threat of historical animosity and the consequent mental toll on soldiers.

The story, shot brilliantly by Nadim Carlsen, follows a group of Dutch soldiers that are in an unspecified Middle Eastern country (a clue that the film is more interested in the characters than in the context, in the personal ramifications rather than the geopolitical consequences). After the convoy in which they are traveling breaks down in the middle of the road, they have to stay the night while they wait for the repair team. While these scenes do not offer any kind of threat, there is a sense of unprotection and vulnerability. There is no one around, they are in the middle of a valley, and the exhausting sun is shining in the sky. The calmness is their main source of discomfort.

While other films would present the threats of guerrillas or hostile enemies – Lone Survivor (2013), The Outpost (2019) – surrounding them, writer Jolein Laarman instead introduces a sole local kid (Omar Alwan). When they are setting up camp, they mistake a goat for an enemy, and they kill it. Soon after, this boy arrives asking about the whereabouts of his animal. Realizing their mistake, they pay him 50 dollars and urge him to leave. Nevertheless, the boy sticks around, asking for more money, with anger and hatred spilling through his words and shouts.

When the waiting extends for another day, the team is forced to split up, leaving behind three soldiers: Erik (Joes Brauers), the considerate young man in charge; Roy (Spencer Bogaert), a hostile figure that has been violent towards the boy; and Thomas (Tobias Kersloot), the neutral ally to Erik’s kindness. Hence, the three soldiers – who are really just teenagers – stay in company of the fuming, but otherwise harmless child. From here on, the film develops as a survival story and psychological thriller, where distrust, fear, and resentment weigh heavily in the relationship between the combatants and the civilian.

At the center of the story is Erik, brought to life perfectly and compassionately by Brauers, who brings to mind the defining performances by Bartosz Bielenia in Corpus Christi (2019) or Kai Luke Brummer in Moffie (2019). His work here is as delicate, painful, and defining as those memorable roles. As we spend more time with him, we realize that he is kind and docile, making extraordinary efforts to appease the boy’s anger. He tries to be amenable and friendly, giving the benefit of the doubt to this local boy that could betray them at any second. Nevertheless, he is constantly pressured by Roy to be more resolute and violent towards the annoying boy. What do you do with your power during a moment of crisis? This character study is engrossing and fatidic.

Director Shariff Korver explained during the Q&A of the film that he was inspired by a news story of Dutch soldiers sent to Italy after being on the field and before going back home to the Netherlands. He was curious and terrified of the total chaos that meant having these young people with deep trauma spending a mini holiday in a foreign, but friendly place. In Do Not Hesitate, this scenario is the end of the story. Korver is more interested in presenting the “before” picture. What kind of trauma could these kids be carrying with them?

Korver and Laarman worked on a setup that would provoke incommodity and harsh conclusions. It is hard to form positive opinions about this film, but at the same time, it is impossible to dismiss it as another war effort. Its conflict is ethically messy, offering a tragic conclusion to a delicate setup. The trauma that the soldiers face, the sole focus of the director’s effort, is provoked by bad decisions taken in a moment of chaos. They are marked by their relationship with the boy, not by confrontations with enemies in the heat of armed battles.

Every actor in the minuscule cast is defining and important, offering different points of view on the moral dilemmas that surround armed conflicts, including the initial involvement through drafting and the reasons to be part of the army, the use of military power over civilians, the racial attitudes in occupied territories and violence as a method of dealing with challenges. Practically, Erik, Roy, and Thomas embody three different perspectives on war, offering distinctive points of view on masculinity, violence, and remorse.

In this regard, Laarman includes an urgent commentary about violence and the way it is seen as valid when answering unforeseen circumstances and threats in the context of war. There is a direct link between toxic masculinity, violence, and armed conflicts, and this movie skillfully brings that to light.

The film is wise by setting the conflict on its most sensible character, the young soldier with too much responsibility and pressure, cornered by the circumstances. This decision creates emotional conflict and tragedy, as well as condemnation on things such as the lack of accountability and excessive power.

Do Not Hesitate is a tough watch. It discreetly brings to life the moral challenges in the scenario of the heavily conflicting topic of armed conflicts. The film is focused on exploring those secrets that are left behind, far away from home, safe from accountability, but not from trauma and guilt. Although its scope is small, its impact is resounding.