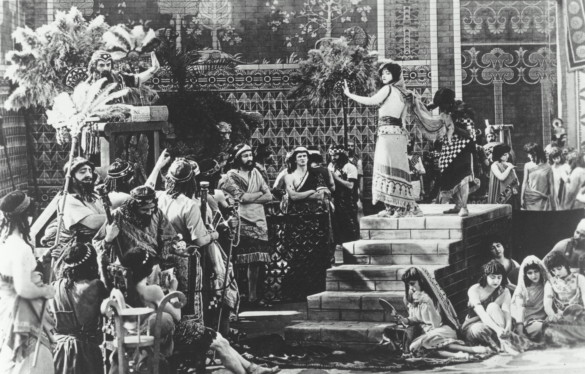 Like many D.W. Griffith films, Intolerance: Love’s Struggle Throughout the Ages (1916) has the rhythm of a poem. Unlike The Birth of a Nation (1915), which sought to tell an epic tale by interweaving various detailed narratives, this film features four loosely interconnected storylines that are linked by a central theme. There are points when Griffith lets go of narrative structure altogether and relies on the intuition of audience members to connect the dots. He also cleverly turns this into a tone poem of sorts. Walt Whitman’s “Leaves of Grass” is even used as connective tissue between the different sections of the story. The line, “Out of the cradle, endlessly rocking” is employed as a jumping-off point for Griffith to explore the manner in which children cannot be sheltered from the collateral damage that comes as a result of historical tragedies.

He splits the story into four different vignettes that are all centrally about intolerance preventing social progression and causing great pain for the most vulnerable members of society. In one of these stories, he tells the tale of the fall of Babylon and portrays it as a tragedy that resulted from religious conflict between followers of Belshazzar and Cyrus the Great. In the second story, he deals with the crucifixion of Jesus Christ and the persecution of early Christians. The third story details the St. Bartholomew’s Day Massacre and the class warfare that helped to fuel it. Finally, he tells a story that is meant to represent the struggle of working class mothers everywhere. All of these morality tales are meant to combine in order to make a strong statement against all forms of intolerance. Of course, this is a Griffith film so racism and sexism are not seen as forms of intolerance.

He really feels the need to hammer home his point in telling all four of these stories, but you find yourself forgiving the preachiness when you take in the sight of some of the sets that he had constructed. When it comes to glitz and glamour, he just can’t be matched. In some ways, his work is similar to that of Cecil B. DeMille, who also dazzled audiences with spectacle and productions with a very wide scope. I think that Griffith receives more respect than DeMille because he does have the ability to hold onto certain plot threads when he decides to bring out the razzle dazzle. With DeMille, it often felt as though the story and its themes were distracting from the mindless extravagance that he wanted to show off. With Griffith, it feels as though there is some purpose behind all of the stunning imagery and the massive crowds of extras. Yes, you do begin to think about the effort that it must have taken to bring all of this together, but you can also get swept up at the moment.

The use of color tinting is also startlingly effective. This is a technique that has largely fallen by the wayside, as three-strip Technicolor was introduced into the world and it became much easier to colorize films. I could notice all of the ways in which the technique was outdated but I still appreciated the correspondence between the colors and the actions occurring on screen. It’s like observing early color grading and it gives you a sense of Griffith’s artistic vision. I can only imagine what he might have done if he had been able to use glorious Technicolor while making this. I’m not suggesting that black and white cinematography is less advanced it is far better suited to certain films when it comes to communicating ideas or setting a specific tone. It’s just that Technicolor would seem to suit a film with this much bombast behind it. Rich hues of gold and red would have felt at home in the first section of the film and they could have served to highlight the vulgarity of the lifestyles that rulers led during that period. The black and white does not highlight points like that with as much emphasis and it is disappointing to realize that Griffith was held back in some regards.

This will likely always place highly on lists of the greatest films of all time. This is because it is credited with pioneering several techniques that have now become essential components of the language of cinema. We might be living in a very different world if we didn’t have big, over-the-top, moralizing epics that contained the occasional flash of brilliance. It may not be my favorite genre of cinema, but I can’t deny the fact that there was something affecting about seeing an early version of a formula that has become stale in the decades following the 1910s. Perhaps I was too awed by its reputation when choosing to evaluate it, but I think that is a bad habit that most people indulge in.