Movie Review: ‘Titane’s’ Horror Metaphors Are Lost in Translation, Despite Its Beauty 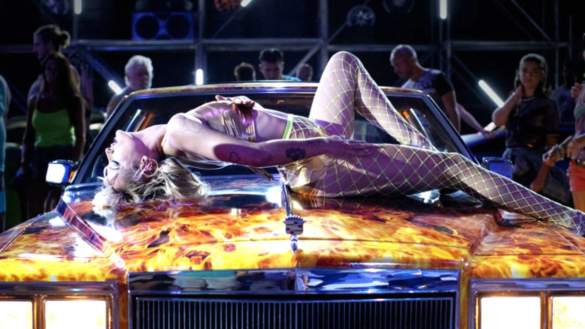 Synopsis: Through a series of bizarre circumstances, a desperate and still-grieving father takes in a woman who looks like his long-lost son, even though she may be dangerous.

There is much to admire about Titane, the Cannes Film Festival Palm d’Or Prizewinner from director Julia Ducournau. It is haunting, captivating, unique, and beautifully shot and acted. But it is also exceedingly disturbing, the kind of film that can only be appreciated by those who are ultra-committed to their cinephile status. Much like Ducournau’s first film, Raw, Titane is a twisted look at obsession, violent and flesh-filled, plumbing the depths of humanity’s darkest recesses. Don’t be fooled by the sexy poster, this film is as far from sexy as you can get.

The somewhat misleading publicity materials are not the only ways Titane fools its audience. Ducournou, who also co-wrote the screenplay with Jacques Akchoti, puts literally four movies into one. The film begins as a glimpse into a dysfunctional family, then morphs into a serial killing spree, then turns into a heartbreaking examination of grief, all the while, in the background, sustaining a horror movie/sci-fi plot element that raises the stakes for everything else. Tonal whiplash is the least of our worries as we are taken through this mad journey via Alexia, a sociopathic woman who barely speaks, played by Agathe Rousselle (in her feature film debut). We are taken through Alexia’s story, first as a child who needs to have a metal plate inserted in her skull after a car crash, then as a sullen adult, still living at home, who is distant from her parents and paying the bills by modeling at car shows (and dancing seductively on those cars, but more on that later). When we soon realize that Alexia is a serial killer, and one who likes to commit her murders up close and very personal, our sympathies for her wear thin, and they disappear completely when, in an effort to hide from the police, she disguises herself to look like the 17-year-old version of a child who had disappeared ten years earlier. What she didn’t expect was to have the lost child’s father, played brilliantly by Vincent Lindon, show up and fully accept her as his lost son, Adrien, and take her home with him.

Any one of these incredibly valid and complex human stories could be enough for an entire film, but Ducournou isn’t satisfied with a film that we may have seen before. Alexia’s journey from childhood trauma through murderous rampage to being in the care of a grieving and desperate man is all underscored by the fact that Alexia is struggling to deal with and hide the fact that she has been impregnated by a car. Yes, you read that right. Early in the film, she orgasms while inside a seemingly alive car, and, soon thereafter, she realizes she is pregnant. It’s not just in her head—her belly is growing AND her blood has been replaced by a pitch-black fluid, which I assume is motor oil. Alexia is not happy with this turn of events, and does everything she can to self-abort (one of many shuffle-in-your-seat scenes), but is unsuccessful and is forced to find ways to hide the ever-protruding belly and deal with the increasing pain from her unusual predicament.

But still, even with all of this insanity, Titane manages to embrace an empathy in its final act, as two genuinely lost souls find in each other what they need. There is no sentimentality or spoon-feeding here as Ducournou challenges her audience to seek out the humanity within the brutal and dark journey. The “pregnant by a car” motif could easily just be a metaphor for an unwanted pregnancy, signifying one woman’s panic and fear for being responsible for another life. If you can get there and are able to go beyond the literal, the emotional reward just may make the difficult road worth it.

But it’s really hard to get there.

There is no tip-toeing around the level-up bizarreness of this film, and how inaccessible it is for anyone not thoroughly committed to this kind of cinema. It is a hard watch, no use pretending otherwise. There is no sympathizing for the main character, which makes for a really tough road for the viewer.  No matter how committed Rouselle is to the role or how beautifully it is shot by cinematographer Ruben Impens, it is a disturbingly unpleasant experience to watch this person claw away at herself, abuse herself, and offer the audience not a single moment of relief. Even if there are great metaphors at work here, not only with the pregnancy but with the recurring theme of metal, the messages are all too lost in the cacophony of violence and self-abuse that by far make the most lasting imprint. It’s difficult for the emotional, final climactic scene to make an impact if your audience has already walked out.