Movie Review (TIFF 2021): ‘Drive My Car’ is a delicate view of life and death 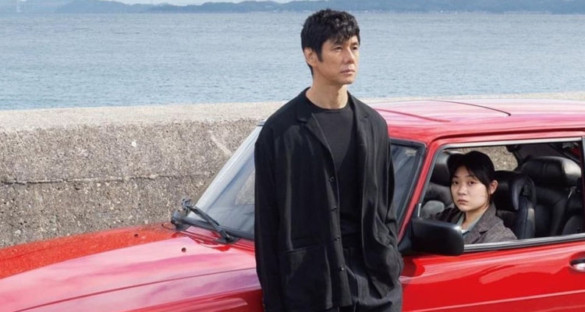 Synopsis: Nishijima Hidetoshi is a stage actor and director happily married to his playwright wife. Then one day she is suddenly gone.

One day, Oto unexpectedly dies, leaving Yusuke in emotional shambles. Two years later (bold of the director to introduce the opening credits 40 minutes after the start of the film), Yusuke accepts an offer to direct a play in Hiroshima, arriving in his red Saab 900. Having to comply with the rules of the place, Yusuke will need the young chauffeur Misaki Watari (Toko Miura) to drive him around the city, as Yusuke recites aloud the lines of the play that he is mounting.

Soon enough, this minuscule and cherished car will witness profound conversations, soul-assuring trips, and confessions that will change Misaki and Yusuke’s relationship. This simple premise is more than enough for the development of a story marked by its melancholy. There is nothing loud or ground-breaking happening on screen, instead – through conversations and small offerings – the director strips down Yusuke and Misaki of the emotional baggage that they are carrying.

What starts as a nostalgic drama characterized by delicate interactions between husband and wife, outbursts of creativity as Yusuke and Oto are intimate, and barriers between the married couple that are never brought down, but slowly evolve into an even more forlorn story. After his wife’s death, Yusuke leads a lonely life, marked by his dryness and uninterest to socialise with others. Nevertheless, Misaki turns out to be somehow his perfect companion: quiet, taciturn, and an excellent driver, they silently lean on each other as they start talking about their past.

Surrounded by a group of actors that are vying for a role in the play of the revered actor/director, Yusuke will have to face secrets of his dead wife that were left untouched and interrupted with her sudden death. Kôji Takatsuki (Masaki Okada) is a young actor, and Oto’s former lover, who comes to Hiroshima with the hopes of getting closer to Yusuke. Always an enigma with calm expressions, Yusuke starts his path to recovery as soon as he acknowledges the reality of his marriage and the mystery that Oto was.

Hamaguchi’s script – adapted from Haruki Murakami’s short story of the same name – is filled with understanding and empathy, respecting the otherness of the characters and their own struggles. As presented by the cast, the dialogues are sentimental lessons and insights into their feelings and regrets.

While the script is filled with meaning and teachings, the scenery injects more melancholy to the story. The recurring rain appears in the saddest moments of the film, while the clean and peaceful environment of Hiroshima reflects the private path walked by both Yusuke and Misaki.

The dialogues of Anton Checkhov’s Uncle Vanya are always present as Yusuke practices them in the car. The play itself becomes a valuable interpretation of the story and Yusuke’s journey. In this regard, Drive My Car is also a moving representation of the power of the arts and storytelling as tools of healing.

Drive My Car is a delicate and transcendental experience grounded on the acceptance of death and the period of mourning on those left behind. Yusuke goes through a painful journey as he realizes that he didn’t really understand his wife. As the film ends after three hours of duration (that go by as delicately as the story), the feelings of anguish start to dissipate as a new hope appears for the actor and his driver.