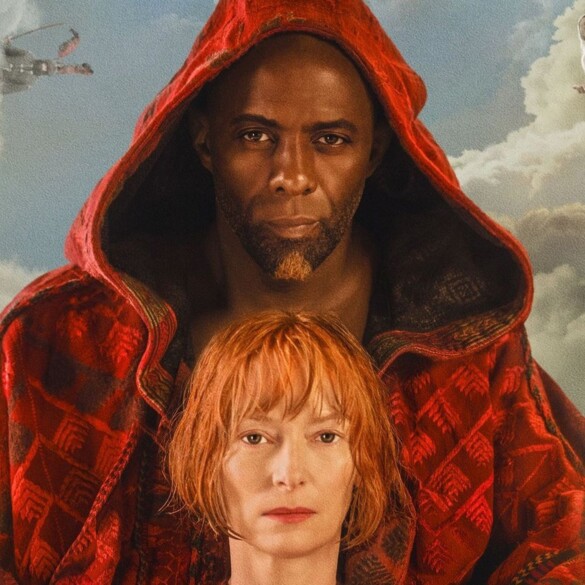 Synopsis: A lonely scholar, on a trip to Istanbul, discovers a Djinn who offers her three wishes in exchange for his freedom.

Even though Three Thousand Years of Longing is yet another addition to George Miller’s eclectic filmography, it ends up being a disappointing affair, mainly due to the subpar writing and rushed pacing, causing the audience to lose the sense of connection needed to bask upon the romantic tales being told.

Seven years have passed since the 77-year-old Australian filmmaker, George Miller, graced the biggest theater screens in the world with the revolutionary and Oscar-winning sequel-reboot of a franchise that was left in the dust for many years, 2016’s Mad Max: Fury Road, aka. one of the best action movies of all time. That film was concocted via a molotov cocktail of pure adrenaline, heat, severity, and frenzy – the end product finalized as a riveting and feral experience that sparked each cinema goer’s mind with the possibilities of action filmmaking. Because of his masterful achievement in crafting such a remarkable and breathtaking feature, eyes have been on him to see what will be his next move. Then, of course, he announced a prequel to Fury Road, titled and centering on the character that Charlize Theron played, Imperator Furiosa. Yet, what has he been doing since? There has to be something else in the works.

Indeed, this was the case. Miller had been working on another feature while he prepared to go back into the world of Mad Max with Furiosa, Three Thousand Years of Longing, based on the short story by A. S. Byatt, ‘The Djinn in the Nightingale’s Eye’. When the trailer was first released, it was sold it as a chaotic and hypnotizing love story between a djinn and a human. This can be described as Miller’s approach to a rom-com; it is him going into a more schizoid fantasy state that lurked in some of his past projects, like The Witches of Eastwick (1987) and his input in Twilight Zone: The Movie (1983). I admire him because, unless he’s making a sequel, Miller doesn’t make the same movie twice. Instead, he prefers to craft new stories to put the audience into a cinematic trance, so they can explore the vastness of the worlds he is curating. Having said this, it seems fitting that his latest centers on a story about storytelling – a narrative about narratology.

Three Thousand Years of Longing is another distinctive addition to his eclectic, mixed, weirdly fascinating filmography. Unfortunately, it leans more toward the misfire side of his selection rather than his triumphs, leaving a bitter aftertaste once the credits roll – a disappointing affair of fantasmical romance. The movie revolves around a London-based academic, Alithea Binnie (Tilda Swinton), who visits Istanbul to attend a conference, and along the way, goes to the city’s Grand Bazaar, one of the largest and oldest markets in the world. As she searches for possible trinkets to take with her, Alithea picks up a memento as a token from her time there. Once she cleans the object, a Djinn (Idris Elba) appears. He offers Alithea three wishes because he’s grateful for being freed from his imprisonment in the keepsake. Alithea knows a lot about storytelling and narratology, telling him that no story revolving around granting wishes won’t end up nicely; something could backfire.

Alithea is content with her life, so she chooses not to make any wishes. The Djinn reacts with intrigue yet confusion, so he tries to change her mind by telling stories about how he got imprisoned, his life story – containing CGI-heavy sequences meant to showcase the hefty directorial hand that Miller has, as well as his cinematic prowess. The stories he tells her are about traitorous kings, beautiful princesses, and the evil lurking in the sands. The tales represent the affinity between love and death, as well as drama and devotion. He ultimately reveals that the only way for him to be free is for her to make three wishes. Initially, the audience is hooked on what’s slowly being developed in the narrative, mainly due to Tilda Swinton and Idris Elba being great screen presences (particularly the former). However, as it continues, you begin to lose interest quickly because of its messy structure and hurried pacing, hence Three Thousand Years of Longing forfeiting its sense of connection and relatability needed to wallow upon these romantic stories being told.

The stories told are supposed to be enthralling, engaging, and in some ways, unrealistically expressive, so the audience could be entertained while being swayed by the romantic flamboyance of these mystical tales. In Miller’s latest, the opposite happens, unfortunately. Not only are these stories lacking in any sense of heft, but they are covered in poor and unsightly visual effect graphics that lull the audience into a state of indifference when you are supposed to be charmed by it all. And you are, to some extent, because Elba and Swinton’s talent uplifts the wonky dialogue. Yet, at the same time, the pairing doesn’t have chemistry with each other, making their quickly-developing affinity, which revolves around a somewhat problematic master-slave dynamic, feel unbelievable. It also doesn’t help that the human character, Alithea, is an uninteresting lead since she doesn’t want anything in the world; she’s content with her life. Her depiction of reality feels so heightened that it is hard to connect with her on an emotional and humanistic level.

The only aspect where you might connect with the character is her sense of neglect for loneliness. So, when you don’t believe, or care enough for, in the “pulsating” love being built around the tall tales and the one with Alithea and the Djinn, what’s left for the audience to be mesmerized by? Of course, it is a charming and occasionally lovable narrative, but it is the approach and structure where it falters the most. There’s little to no magic left in Three Thousand Years of Longing when it is all set and done. However, it is not an outright disaster; quite a few elements would entice cinemagoers, apart from the performances. George Miller makes a few interesting observations about the impact storytelling has on human evolution and how it helps us make sense of this strange world filled with constant wonders and immoralities. However, his most exciting ideas and observations are left in the dust, as they are not given the proper time to develop, or at least the characters in the film could have pondered the link between existence and storytelling in a far more intriguing fashion.