Movie Review: ‘Thoroughbreds’ is a fascinating exploration of empathy and apathy 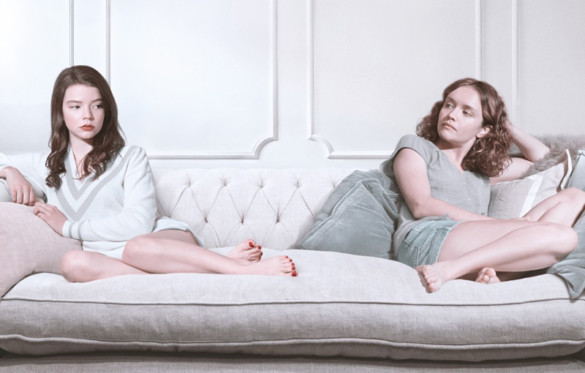 Synopsis: Two upper-class teenage girls in suburban Connecticut rekindle their unlikely friendship after years of growing apart. Together, they hatch a plan to solve both of their problems-no matter what the cost.

There are countless films that have explored empathy and apathy previously, but first-time director Cory Finley has tackled these notions in some rather invigorating ways in Thoroughbreds. There’s a visceral quality to this film that provocatively demonstrates empathy, or the lack there of, becoming entangled with its violent tendencies. The result is a compelling tale of two friends who end up questioning how empathy can evolve.

The film opens with Lily (Anya Taylor-Joy) reconnecting with her friend Amanda (Olivia Cooke), who had recently been in some trouble after committing some disturbing animal cruelty. As the two of them bond over small talk, their friendship turns somewhat into a partnership, where they hatch a plan to solve their problems for good. This, of course, unravels into something that neither of them expected.

There is much to unpack with this story, but what makes Thoroughbreds so fascinating is how it wears this facade of being violent – the film often talks about violence and heavily implies a sense of brutality – but Finley isn’t interested in showing you actual violence. It would have been real easy for a lesser director to delve into unnecessary and gratuitous hostility, but at every turn Finley restrains himself to illustrate something more internal. Something more emotional and human. Every major disturbance happens off-screen and yet there’s still a guttural ambiance rendered in how Finely frames, edits and scores those sequences.

Instead of becoming consumed in its violence, like many films of this ilk tend to do (looking at you Raw), Thoroughbreds is really more of an exercise in empathy and apathy. The violent underbelly that Finley implores here is simply a dramatic tool to amplify the progression of both Lily and Amanda – two women who become entangled in juxtaposing arcs in regards to empathy and that evolves in both of them.

Lily is a normal teenager, fully capable of human emotion and certainly emulates that throughout film. Everything from anger to sadness to fear to resentment to empathy as we see in those early scenes. But for Amanda, through some sort of disorder or psychological ailment, she can’t feel human emotion. She confesses early that all of her emotion is manipulated as her way of trying to fit in with her peers. And throughout the film Amanda is cold and unequivocally straightforward in everything she does, giving credence to those claims.

As the two become more involved with their plot to solve their problems, a captivating irony starts to unfold and by the end of the film, you could argue that the character – who by definition is the most apathetic – is the one who ultimately demonstrates the most empathy. And on the flip side, the character that can emote, and often does emote, is the one that converts into being the most apathetic and distant in terms of emotion. The transformation is subtle, but thematically poignant, in how Finely captures these fundamental changes without showing us the physical brutality of what happens. By showing the emotional devastation and lingering on character reaction, it gives the experience a heft that would have become lost in providing gore.

Much of this also resonates because of the performances by Taylor-Joy and Cooke, who are absolutely stunning in this film. Both of them tap into the evolution of their respective characters in powerful ways that help bring weight to Finely’s vision. They have a chemistry that also feels palpable. In his last role, Anton Yelchin provides a great performance as well. He gives his character of Tim a confidence that chews on dialogue and demands the screen. Yet, simultaneously there is a timidness to Tim at the same time. Despite little screen time, Yelchin provides a somewhat complex character that is necessary to the film’s overall plot.

Thoroughbreds isn’t going to be for everyone. It’s methodical, it’s not interested in being horror film and it attempts to upend your expectations. And for me, Finley succeeded in that by showcasing restraint in his direction and providing a though-provoking experience. There’s a poetic elegance in how he explores his ideas of empathy and apathy. Perhaps that’s not your style, and that’s fair, but if you’re willing to clutch the prowess of Finely’s artful approach, there’s a lot to appreciate here.