Movie Review: ‘The White Tiger’ is a Stylish Examination of Class Barriers 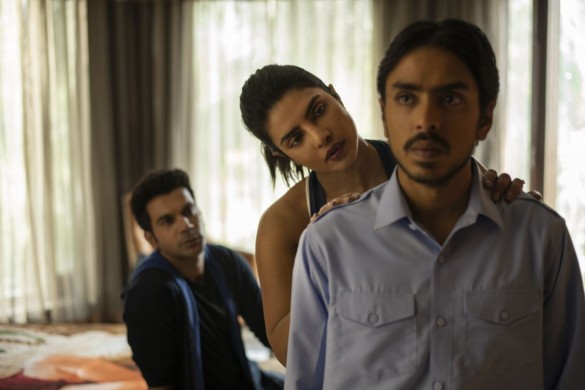 Synopsis: An ambitious Indian driver uses his wit and cunning to escape from poverty and rise to the top.

In 2009 Danny Boyle took the Oscar for his adaption of the novel Q&A by Vikras Swarup; it told the story of a young, impoverished boy living on the streets of Mumbai who overcame the odds by winning a game show and reuniting with his long lost love. It was hailed as the “feel good movie of the decade” and won critical acclaim.

It makes sense that Ramin Bahrani’s The White Tiger should be compared to Slumdog Millionaire. It is, after all, another adaptation from a book – this time from Aravind Adiga’s 2008 Booker Prize winner of the same name – and is the story of another young, impoverished boy from India who ascended from his low-class position, but there the similarities end. With a scrappy, hard-to-like protagonist, a searing look at the Indian caste system, and a darkly humorous take on ambition and success, Slumdog this ain’t.

When we first meet Balram (an excellent Adarsh Gourav in an unforgiving role as a dislikeable antihero) he is living an opulent lifestyle in Bangalore, a place he describes as India’s Silicon Valley. He is rich and successful, slickly dressed with a trendy mustache. He believes “the future of the world lies with the brown man and the yellow man”, asserting that India and China will become future superpowers and world leaders. To that end he writes an email to China’s Premier, Wen Jiabao, explaining his origins and how he rose to prominence. It is this email that frames the narrative of The White Tiger, as we observe Balram’s humble beginnings in the destitute village of Laxmangarh where he crosses paths with The Stork, a rich coal baron and landlord, and his sons for whom Balram is determined to work.

Balram’s picaresque journey shines a light on the social inequality of modern India, a country with a strict caste system which ensures those born into poverty stay there, while the wealthy elite use them as servants and treat them with disdain. A particularly strong metaphor involving roosters in cages evokes the hopelessness of the situation and underscores Balram’s quiet fury for his station in life. Bahrani fills The White Tiger with such visuals and metaphors, and for the most part they land hard. A modern India on the cusp of globalization is contrasted with the often severe conditions its underclass live in. Balram operates as a chauffer for The Stork’s sons, watching as they live in the lap of luxury, while he must sleep in the garage behind a mosquito net. Homeless families live by the side of the road as Balram drives his employers to and from their workplaces. All of these moments serve as defining to Balram in his understanding of class conscience, and his rise is paralleled in the rise in prosperity of India itself.

Bahrani brings a fast paced and satirical style to The White Tiger. It is high energy, darting from moment to moment, all overlaid by Gourav’s voiceover. It is akin, in some aspects, to a Scorsesian set-up (think Goodfellas or The Wolf of Wall Street) and confidently barrels towards its conclusion. In this way it sacrifices some of its meatier aspects – the transformation of Balram from lowly servant to successful entrepreneur is tragically underdone and feels like a missed opportunity; the tone is slightly uneven at times, with grand and quick metaphors used in place of a built-up arc showing the crippling class system rather than telling us about it – but there is the feeling that those harder truths were substituted for stylishness and for all that Bahrani could have made a more excoriating expose of the caste system, what we got was as much an intentional whirling dervish as a serious drama.

Elsewhere, the rest of the cast deliver. Rajkummar Rao’s Ashok is the rich son of an upper-class elite, who was raised in America and thus has adopted American values as his own. He, alongside his US-born wife Pinky, treat Balram with occasional respect that the servant isn’t afforded by anyone else; yet there is an fascinating undercurrent to Ashok. He switches from respectful friend to cruel master in a snap befitting the situation, often unnervingly so. Although externally he maintains his ideals as an adopted American – shunning the caste system and insisting that Balram call him by his first name – he is so comfortable in his privilege that the mask of worldly sophistication often slips and we see the true nature of his upbringing. It is an essential part of the character and one that Rao nails perfectly. It is also telling that Pinky’s departure, when it comes, signals a sea change for Ashok, as well as for the movie itself.

At times, The White Tiger lacks narrative heft. It is at its best in the initial set-up, as it contrasts the two different worlds in India and suggests what might happen should they collide. Unfortunately, it doesn’t quite stack up its ending with as much satisfaction as it implies it might, as though Bahrani decided his point had been made halfway through and allowed the climax to be more of a whimper than a bang.

For all that, though, The White Tiger is excellent. Hilarious, edgy, modern, and stylish, it leans into its more superficial aspects to great effect, even if it sacrifices some of its more salient points along the way. Backed up with confident direction and great performances, it’s a fascinating insight into a culture we don’t often get to see.