Movie Review: The Shadowy ‘The Tragedy of Macbeth’ Gives Stars A Place to Shine 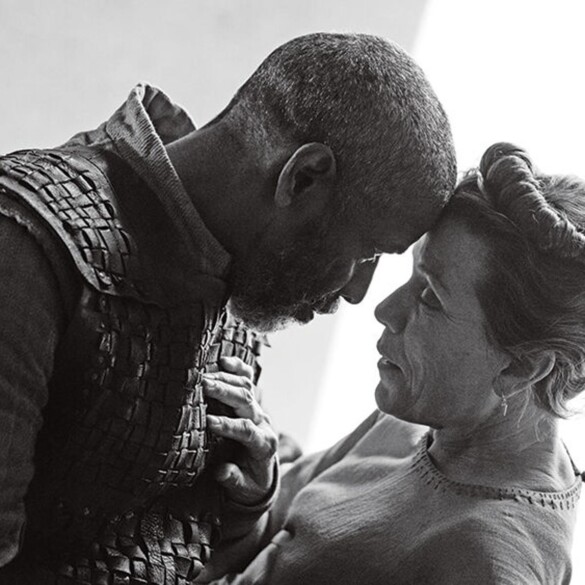 Synopsis: A Scottish lord becomes convinced by a trio of witches that he will become the next King of Scotland, and his ambitious wife supports him in his plans of seizing power.

There is a tendency when adapting a work of William Shakespeare to overdo it when it comes to costumes, sets, makeup, action sequences, and music. Think Baz Luhrmann’s gaudy, brilliant spectacle Romeo + Juliet or any of Kenneth Branagh’s adaptations, but especially the  lavish Hamlet. Even Ralph Fiennes’ gritty military fable Coriolanus distracts with its media presence and gun toting soldiers. It all becomes a bit too much and overwhelming. A modern audience has only a tentative grasp on the language already, so to draw focus away from the characters is to wrench meaning from our grasp even further.

That is the brilliance of Joel Coen’s adaptation. In his and his crew’s hands, we are given a minimalist view of the Scottish play. It’s almost a return to the stage, to the bare bones of the story and the feeling. This isn’t at all to write that the sets hold no value or that they don’t influence the character of the film. Stark though they may be, production designer Stefan Dechant has created spaces that evoke meaning and have great consequence. There are dagger shaped door handles, cross beams that hold walls apart, but let sunlight stream in, towering walls, open air courtyards, and rain, leaves, and crows that pour into rooms. The sets and the mood are like something from a silent film out of the German Expressionist movement. The film emulates the sharp angles, the shadowy corridors, and stark, beautiful close ups of masters like Fritz Lang and F.W. Murnau. Many of the camera techniques are evocative of this movement as well. Joel Coen and cinematographer Bruno Delbonnel elevate the camera high above the action showing the utter powerlessness of our characters in the face of fate. They also play with light and shadow to keep us in a mood as dour as our protagonists.

And what protagonists they are. If The Tragedy of Macbeth is known for anything, it should be that this is a perfect cast. Every single actor has brought something that inspires awe at their physical skill and nimble tongues.  Our titular Macbeth (Denzel Washington), is part pensive, dutiful soldier; part underhanded schemer; and part blustering, bombastic, mad king and he handles all of it with aplomb. In early scenes, his presence commands us to sit forward and listen to his whispered machinations. In later scenes, his voice echoes and booms forth in diatribes as he spits venom in our ears and commands our attention even as we sit back aghast. There’s something to be said for the impeccable Frances McDormand as Lady Macbeth, as well. She growls, bites, schemes, and goes mad with the best of them. Her performance is so taut, she demands we listen and know every word she is saying. She executes every syllable with a harshness and pain that rattles our bones.

Both of the leads are true masters of their craft, but you will not want to take your eyes off of Kathryn Hunter as the witches. She has a physicality that borders on the grotesque, but is ultimately mesmerizing. Though, not to be missed is her vocal acrobatics and the sunken darkness of her eyes. Her eyes, her blackened, almost burnt looking arms, and the cracked dehydrated look of her lips help the performance to new heights thanks to the efforts of Jean Ann Black and her makeup and hairstyling team. When she stands to deliver her prophecy, she summons the image of Death from Ingmar Bergman’s The Seventh Seal with the perfect addition of a cloak and cap supplied by costume designer Mary Zophres. The witches are macabre characters made even spookier by a performer who elevates the original intent.

A hallmark of a great adaptation is also what is added to the original text. Not necessarily in spoken dialogue, as that dialogue is taken, especially in a Shakespearean adaptation, as sacrosanct, but in how the story progresses in between the dialogue. For his part, Joel Coen has added an intriguing layer to the character of Ross. He is a schemer and has many silent scenes where he is an observer who uses this to become a major player. He is this shadowy figure and much more than the exposition machine he is intended as.

The Tragedy of Macbeth is stripped down to the roots of what makes the original text great. The flashiness of the production is right where it should be. It’s on the actors on the screen who can enrapture us better than any fake feast or bloody battle scene could. It’s a film that grabs you in the first seconds, holds you, stares into you, and bares its own soul. By the pricking of our thumbs, something wicked awesome is upon the screen.