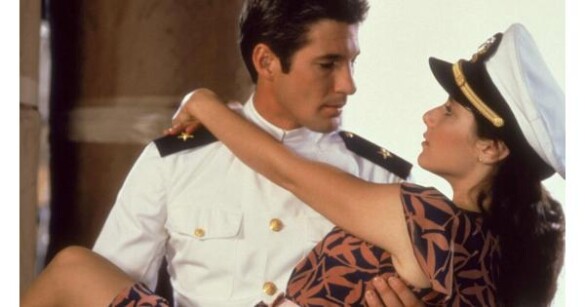 An Officer and a Gentleman (1982) feels out of place in the cinema landscape of the 1980s. It seems like a picture that would have been made in the 1940s, when Hollywood was regularly pumping out war propaganda films. At its core, the film is an old fashioned tale about an emotionally tortured, lonely young man becoming his best self after going through military training. It unquestioningly supports the idea that the lives of its protagonists will be improved if one of them becomes a Naval Aviator for a couple of years. It seems to exist in a world in which The Best Years of Our Lives (1946) had never been brought to the screen and still holds onto the belief that depressed small town girls can escape all of their troubles if they marry a man with the right military rank. It must have seemed quaint to the moviegoers of 1982.

Richard Gere is bizarrely cast as Zack Mayo, a damaged individual with severe daddy issues. We learn that his mother committed suicide when he was just a young boy and come to understand that he has never trusted women because he believes that they are always out to take advantage of men. As an adult, he heads to the Aviation Officer Candidate School in Newport, Rhode Island and attempts to use underhanded tactics to succeed during training. His drill instructor, Gunnery Sergeant Emil Foley (Louis Gossett Jr.), disapproves of his naughty behaviour and resolves to turn him into a diligent stuffed shirt. Foley becomes a father figure for Mayo and helps him to move past his abandonment issues. Mayo also falls in love with Paula Pokrifki (Debra Winger), a local factory worker who is desperate to marry an officer and leave her hometown. Mayo is hesitant to commit to their relationship but eventually admits that he cares deeply for her.

It quickly becomes difficult to support the theories that the film advances because you keep wondering what will happen when Mayo and Pokrifki get their happy ending and start living together as husband and wife. It’s not too difficult to imagine him realizing that he will never be entirely comfortable with cozy domesticity or her coming to understand that she and her husband actually have nothing in common and got together because they wanted a brief reprieve from all the disappointment in their lives. You keep waiting for Winger, Gere, and Douglas Day Stewart to lean more heavily into this sense of melancholy and hopelessness but they insist upon producing an uplifting crowdpleaser.

The training scenes are just plain dull but the film really lives or dies on its portrayal of the desperation of small town life. Pokrifki is supposed to be a woman who is primarily motivated by her desire to get out of Newport and see the world. She is mentally scarred by the knowledge that her mother was unable to ‘tie down’ her father and sees the experience of seducing men as a game of sorts. She needs to play her cards right in order to draw Mayo in and trap him in a situation where he will be unable to leave her. It would be very easy to root for this woman to marry a man and get out of this small town if it felt like her dissatisfaction with Newport was deeply felt. If her job at the factory was painted as a source of great pain for her, all of the working gals in the audience would be able to relate to her struggles. Unfortunately, Pokrifki isn’t exactly a relatable human being. When she’s at work, she appears mildly disinterested and bored. She struts around in her cute little cap and dutifully does her job without ever looking stressed or getting frustrated with one of her co-workers. If she threw a hissy fit, she would become un-sexy and cease to serve as the stoic heroine that this narrative apparently needs. At every turn, Stewart attempts to have it both ways. Pokrifki wants to get out of her boring small town but she isn’t allowed to be avaricious, ambitious, or manipulative. This means that it’s rather difficult to cheer or burst into tears when Pokrifki is carried out of that factory. She hasn’t worked particularly hard to get out of it and it’s hard to believe that her life as a Navy wife will be any more enjoyable than her life as a factory worker in Newport.

The whole film feels a little too loose and easy breezy. There is too little at stake here. The cheesy theme song and sweaty sex scene convince you that this is going to serve as a piece of fantasy fulfilment, but it forgets to set up meaningful stakes. There needed to be more longing and pining and agonizing over the thought of not falling in love. Happy endings become especially sweet when we are made aware of the fact that the main characters came precariously close to losing everything and spending the rest of their lives alone and unhappy. With Mayo and Pokrifki, there’s never the sense that they couldn’t bear living without one another. You get the sense that they would have been mildly upset if they had been forced to break-up. They’re just not convincing as two people who are madly in love.