Movie Review: ‘The Suicide Squad’ is a Gore-geous Passion Project Not For The Faint of Heart. 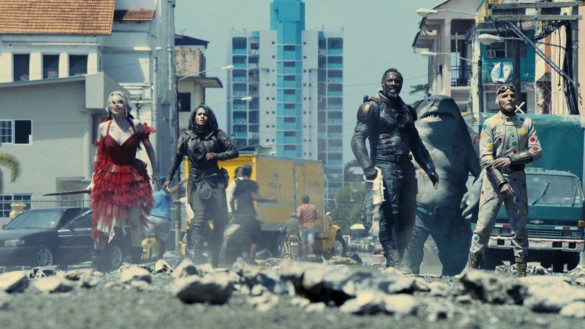 Synopsis: Supervillains Harley Quinn, Bloodsport, Peacemaker and a collection of nutty cons at Belle Reve prison join the super-secret, super-shady Task Force X as they are dropped off at the remote, enemy-infused island of Corto Maltese.

There’s a certain euphoria that comes from fictional violence that fills me with joy. It’s the power trip that comes from executing enemies that have no idea what is in for them. Games like Doom, Shadow of the Tomb Raider, and Uncharted 4 have all given me this feeling before. Between waiting for a silly soldier to walk into a trap set just for them, or running a chainsaw through a demon, there is something primal and fun to the violence. While violence in real life is cold and bad, in media, it can be fun and engaging. But there hasn’t been a lot of movies that capture this feeling to me. Sure, John Wick has the brutal violence that is heart-pounding to watch, but it doesn’t catch the effortless feeling these games do. Deadpool tries to capture this feeling, but the meta-commentary changes the tone considerably. The films that have captured this feeling the most have been Birds of Prey and Once Upon a Time… in Hollywood. But they still feel restrained, having small amounts of brutal violence in them. Luckily for me, The Suicide Squad is an unrestricted bloodbath that lavishes in this maniacal violence throughout.

THE SUICIDE SQUAD: STYLE AND GENRE

James Gunn’s The Suicide Squad is a movie full of gut-busters, in both laughter and violent ways. It’s a film that can only be described as a superhero movie, as no other genre would accurately define it. It’s a hodgepodge of different genres, using elements from spy thrillers, war, and coming-of-age films. Despite these different genres, Gunn’s style permeates it all, being the adhesive to make this film work.

That style comes through the form of its heightened violence, the dynamic camera work, and the film’s brisk pacing. The Suicide Squad is constantly moving, and while there are slower sequences, it is constantly moving forward with visceral energy. That energy is comparable to a film like Shaun of the Dead, or Kingsman: The Secret Service. It’s never dull, and not going at a million miles an hour, but a solid pace.

And despite these similarities to R-rated parody films, The Suicide Squad never stoops to the level of parody often found in the hyper-violent comic book movies. While I adore Matthew Vaughn’s comic book movies and have a good time with Deadpool, the meta-commentary often pulls me out of the film. The jokes are aimed at the audience, at the expense of the superhero/spy genre. While the occasional joke is made between characters earnestly, these are in the minority for these films. By comparison, The Suicide Squad’s comedic beats are built on character interactions. That isn’t to say there aren’t gags aimed at the audience. There are a plethora of visual gags aimed purely at the audience, that utilizes snap zooms, quick edits, and awkward pauses to be funny. And this emphasis on visual gags, and making memorable visuals, shows how much of Gunn’s heart and soul went into this film. Gunn’s direction is clear from moment one, giving clear direction to cinematographer Henry Brahum, and guiding the editing pair Fred Raskin and Christian Wagner to create striking visuals that stick around long after the film has ended.

But it’s not just the visuals that ooze with passion.

James Gunn is a master of creating memorable characters out of the most basic elements. He did it with Guardians of the Galaxy, and he did it again here. From Blackguard to Savant, to Ratcatcher 2 and Bloodsport, each character feels real. Even the techs that work for Waller feel fleshed out, having their own thoughts, feelings, and jokes. For as disposable as each of these B-list characters are, Gunn’s writing works to ensure you remember them for their contributions to the team. And each of these characters is brought to life masterfully by their actors. Particularly, Idris Elba and Daniela Melchoir give standout performances, bringing their characters to life with earnest emotion throughout. And the rest of the cast is all clearly having a blast, bringing their over-the-top super-villains to life with a dead serious demeanour. From John Cena’s portrayal of the liberty chasing Peacemaker to Sean Gunn’s hilariously acted Weasel, the cast is giving their all. And of course, Margot Robbie is fantastic as Harley Quinn. Robbie killed it last time in Birds of Prey, and here, despite being a supporting character, she still steals scenes. Harley may not be given as much to do, but it builds off her emancipation perfectly.

And what glues this all together is the focus on comradery throughout. Unlike the Avengers’ films, which often pin the heroes against each other often, The Suicide Squad allows these characters to build solid friendships. Despite the film’s quick pacing and violent nature, there are genuine, heartfelt moments throughout the film that allow characters to share how they feel. And the empathy that is expressed by each character for each member of the team during these sequences allows us to care. Despite the deposable nature of the characters, I began to care for them. And it created tension throughout that had me on the edge of my seat. That, to me, is cinema.

Despite the praise that gushes out of me like a slashed artery, I do have to admit that this film isn’t for everyone. This is a hard R-rated film, with extreme violence that would be fitting of a war movie. If blood, guts, gore, and stabbed hearts aren’t your taste, this isn’t for you. And with that hard R rating, the jokes are all heavily reliant on your enjoyment of the bloodbath. For some, this film is an unwatchable mess. But for me, this movie rips and tears in all the right ways.

The Suicide Squad isn’t a subtle film, in its violence, or its themes. There is a lot to unpack with this film regarding the American prison system, American Interventionalism, and what it means to keep the peace. But what stood out to me most was the theme of purpose through people. Gunn has always put people first, and here, it stands out above the rest. While it’s not the deepest film in the genre, there is a genuine quality to it that stands out, despite the hyper-violent nature of the film. I love this movie, and heavily recommend watching it in theatres or online with HBO Max.