Movie Review: ‘Val’ is an Emotional and Engrossing Documentary 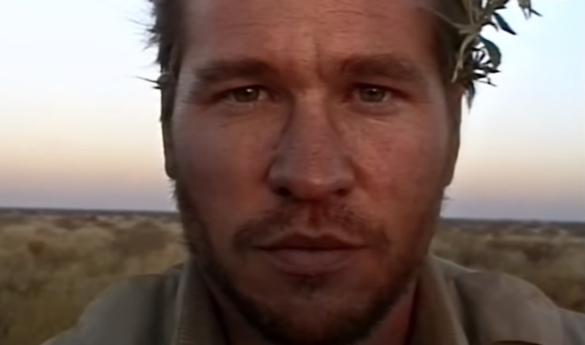 Documentaries about actors and filmmakers are typically entertaining because there’s a wealth of familiar footage from their movies that can play out as a bunch of talking heads comment on the highs and lows of a person’s career. If you’re particularly interested in the figure being discussed, you might not even care if the documentary is standard and pedestrian, with nobody re-inventing the wheel on a craft level to help celebrate a famous person’s life. The new documentary Val, however, is something entirely different, a strikingly original look at the life of actor Val Kilmer that is made all the more thrilling with personal and behind-the-scenes footage shot over many decades by Kilmer himself.

Co-directed by Ting Poo and Leo Scott, Val has some elements of a typical documentary, with scenes presented in mostly chronological order from many of Kilmer’s most famous films, including Top Gun, Tombstone, and Batman Forever. Yes, there’s a section dedicated to his time as the Bat, including his struggle performing inside the suit and the hit his career took when he turned down Batman & Robin in order to do 1997’s The Saint. He calls his 1984 debut Top Secret “fluff” and discusses in some detail the disastrous experience the infamous The Island of Dr. Moreau came to be.

But this extraordinary film, now available on Amazon Prime, goes so much deeper than showcasing the highlights of his film career. If you’re a fan of Kilmer’s, you will delight in the behind-the-scenes footage Kilmer shot on many of his famous projects, Kilmer spending most of his life like an aspiring director, always with a video camera in his hands. We get footage of his friends Kevin Bacon and Sean Penn at Julliard, his audition tapes he made himself for Full Metal Jacket and Goodfellas, home movies of him exploring bat caves in Africa moments before receiving a call about Batman Forever, and spellbinding behind-the-scenes on The Island of Dr. Moreau of Kilmer arguing with director John Frankenheimer as well as pushing a relaxed Marlon Brandon in a hammock.

But more so than all the revelatory footage, Val isn’t interested in gathering the major actors, producers, and directors Kilmer has worked with since the 1980s to get their two cents on the man and his career in cinema. No—the only time we hear from his former collaborators is through occasional stock footage, and the majority of what we get instead is Kilmer today, warts and all, often in pain, barely able to speak, as he keeps his sense of humor alive the best he can and demonstrates great love for his family. His son Jack Kilmer—an actor himself—narrates the movie for his dad, whose voice has deteriorated in the last few years since receiving treatment for throat cancer. Whenever modern-day Kilmer speaks to us on camera, he has to press his finger against his throat to allow for words to come through, subtitles appearing on the screen because he can be difficult to understand.

The documentary is packed with more drama and emotion than you might expect, especially if you’re not aware of the tragedies and hardships Kilmer endured in his life, particularly the loss of his younger brother in a drowning accident at age fifteen. Kilmer talks about how the death of his brother stole a lot of joy and spontaneity from his family, Kilmer’s parents are paralyzed with grief. Kilmer touches on the difficult divorce he experienced in the 1990s from the prolific actress Joanne Whalley, who appeared opposite him in Willow, and how he rarely felt creatively fulfilled through his film acting, so often frustrated by lackluster characters and only sometimes able to demonstrate the full capabilities of his talent (a glimpse of Kilmer playing Mark Twain live on stage is a wonder to behold). And then there’s the two-year battle with throat cancer he endured, the aftermath of which is shown at times in painful detail, like when Kilmer has to stop signing autographs for fans because he has to throw up.

If you’ve been more of a casual fan of Kilmer’s work like I have been, someone who is only vaguely aware of his more recent health battles, this documentary opens us up to his life in a way that is richly rewarding. You get the layers peeled off a screen persona you might have thought only one way about because of his brief appearance in the Batman universe and ultimately receive a much deeper look at an artist, a father, a survivor. His son’s narration gives the enterprise an added level of emotion, and the way directors Ting Poo and Leo Scott blend everything together so seamlessly through marvelous editing and a poignant score makes for a tremendous piece of filmmaking any fan of documentaries will relish in.

Val has the feel and rawness of Steve James’ powerful 2014 documentary Life Itself about the life of Roger Ebert, which also showed Ebert’s devastating health struggles amidst the unlikely success story of a gifted film critic from Chicago. One thing Val doesn’t have that makes it even better is the lack of talking heads, the focus solely on Kilmer and his desire to find peace and love in the face of adversity. The only criticism I have for Val is that the running time is a tad brief, so many of his later high-profile films glazed over in a matter of seconds, his initial throat cancer illness and later treatment only given a few minutes of exploration toward the end. I ask for most movies to have twenty minutes chopped off, but Val could have been expanded another thirty, the filmmakers not having to rush so fast in the final act.

But that’s when you know when a movie is working: when it leaves you wanting more. Val is a dazzling piece of work, easily one of the best films of 2021 thus far, a riveting examination of an actor that makes you appreciate in many ways the man more than the actor. We’re left with hope that Kilmer’s days as a creative artist are far from over, and for that, we can all be grateful.