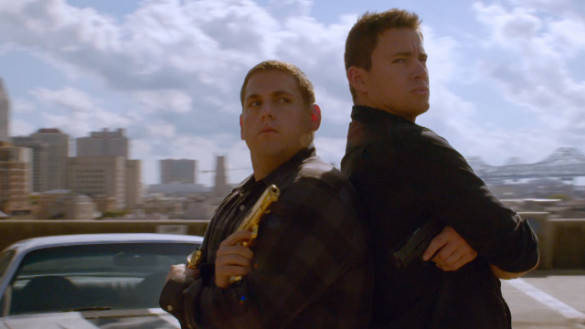 Synopsis: After making their way through high school (twice), big changes are in store for officers Schmidt and Jenko when they go deep undercover at a local college.

INTRO
I would rather be stuck in an elevator with a person whose breath is as bad as Megan Fox’s acting, than suffer through another Jump Street. One genre of film that I personally hate reviewing is Comedy. What makes one person laugh may not necessarily make the next person laugh. Being somewhat of an entertainer with a very dark and crude style of humor, I find the writing in most comedies to be crafted in a way that forces the jokes on you and uses retired jokes until you laugh. 21 Jump Street was one of the worst movies I saw in 2012 as it suffered from a triple crown of having a bad storyline, terrible characterization and of course not being very funny.

DIRECTION
Chris Miller and Phil Lord’s 22 Jump Street is fully aware that it is a sequel. The majority of the film deals with running gags from the first film and fails to offer anything new and exciting for its 122 minute runtime. Miller and Lord should stick with doing animation because The Lego Movie was a better effort in my opinion. Miller and Lord working with a script by Michael Bacall and Oren Uziel results in repetitive jokes, nonexistent character development and offers no depiction of actual college life. Miller and Lord also have too many moments where they try to force you to laugh. For instance, there is one scene where Schmidt is fighting with a female character and the film tries harder than a rabbit trying to get some trix to be funny.

SCRIPT
The picture opens with an amusing “previously on 21 Jump Street” bit before diving headlong into the new story. After a solid action sequence, Jenko and Schmidt are sent into a local college in order to locate the supplier of a drug known as “WHYPHY” (WiFi) that killed a student photographed buying or dealing it on campus. Just like the previous film, a drift between the two partners occur when one befriends another group of friends. Jenko meets quarterback Zook (Wyatt Russell) and the two instantly form a bromance so tight that will make Seth Rogen and James Franco jealous. Schmidt finds himself in a romance with Maya (Amber Stevens). Jenko and Schmidt once again not only have to crack the case but they need to address their personal issues before it’s too late. Most of the film’s humor is supposed to come from the disintegrating partnership between Schmidt and Jenko, as there partnership is equated to being a gay relationship. I found these jokes to be very unoriginal and seemed to be insulting the gay community. There was also a few jokes that dealt with rape and once again I found the jokes to be unoriginal and quite silly. A lot of the audience at the screening I went to were laughing so hard I’d thought that have read a Tyler Perry script. Maybe I am different in that I do not find rape and gay jokes to be funny.

PERFORMANCES
I know this is a comedy but at least have some characters that are not one-dimensional and useless. Speaking of useless, Jonah Hill’s character was extremely boring in this movie and had zero development at all. I can tolerate Hill in the right type of film but in the Jump Street films, his character gives me a stomach ache. Tatum was better in this movie than the first one but personally I do not think that he can play comedic roles. Jillian Hall and Wyatt Russell shined in every moment they were on-screen and was able to work well with Tatum and Hill in their scenes with them. Amber Steven’s did a wonderful job as being the Kate Upton of this film-serving as amazing eye candy.

SCORE
Despite the lack of direction and script, one thing that does work well here is the music. How convenient is it, that the drug on campus is called WHYPHY, which is Work Hard, Yes; Play Hard Yes. Work Hard Play Hard just so happens to be a Wiz Khalfia song that is incredibly fitting. Music by Duck Sauce, Tiesto, Steve Aoki are also featured in this movie that balances the hip-hop and EDM style music effectively. Mark Mothersbaugh’s score isn’t featured much but works well when it’s there. The soundtrack overall is pretty great though.