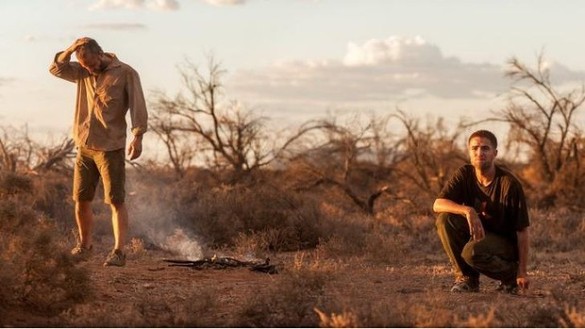 Synopsis: Ten years after a global economic collapse, a hardened loner pursues the men who stole his only possession, his car. Along the way, he captures one of the thieves’ brother, and the duo form an uneasy bond during the dangerous journey.

DIRECTION
After the release of Animal Kingdom, David Michôd has proven himself to be a modern director to look out for, due to his gritty style and dark take on crime and violence. With The Rover, he fills the screen with that same raw grit, which really adds weight and power to the film’s dystopian setting. The film looks great, it’s wonderfully paced, and Michôd presents some really tense but fascinating character interactions. This may sound like high praise, but unfortunately the film’s first half focuses too hard on the madness and terror of this dystopia, that I personally found no connection between this setting and character dilemmas, and ultimately nothing to drive home the film’s themes and poignancy; for a while I didn’t feel like the film’s post-apocalyptic setting served much of the purpose to the story. In fact, we probably could’ve had even more scenes of listening to these characters just talk to each other, there just wasn’t enough of that. None of this is the case with the film’s truly emotional climax, where we are finally presented with the heart of this story, it’s just too bad it was quite a frustrating struggle to get to this point.

SCRIPT
Much of the film’s lack of focus in the first half can also be attributed to the script, but overall Michôd’s writing is particularly strong. While the story itself is fine, mirroring similar conflicts such as Cormac McCarthy’s “The Road” and even Stephen King’s “The Gunslinger”. But it’s the film’s dialogue that is the script’s strong point. Character interactions feel natural and authentic, and are beautifully bleak in contributing to the film’s setting. Quite honestly, the film’s dialogue between characters is the best part of the entire movie, and the only fault, as I already stated in the Direction, is that there just isn’t enough of that. More of these exchanges would’ve helped drive home the film’s themes and connection with the dystopian setting, and would have essentially helped create a nice build to the film’s wonderful climax, a build that felt sorely lacking. But the strong points here truly are incredible.

PERFORMANCES
Guy Pierce is a natural in these kind of roles, and his performance here is absolutely mesmerizing. His mystery and personal struggle is quite fascinating, and he certainly keeps the audience engaged; it reminded me a lot of his performance he gave in a film called The Proposition, a vastly underrated film. This is both a praise and a critique, because for how good it is, it also distracts from the other performances in this film, and for me the rest of the cast are merely functional in their roles. Robert Pattinson has been getting a lot of acclaim for his performance here, and while it is certainly good I wasn’t quite blown away, nor does he compete too well with the weight of Guy Pierce’s performance. Pattinson portrays Rey as a very simple-minded fellow, almost channeling what Leonardo DiCaprio gave us in What’s Eating Gilbert Grape. It’s a good performance but one I had a difficult time wrapping my head around, and I still think Pattinson has trouble acting in different dialects and accents. But ultimately, it’s Guy Pierce at the forefront, and his fascinating struggle only feels limited with the character of Rey to tag along with; it feels like it takes away from Pierce’s internal struggle.

SCORE
Antony Partos scores this film and creates a frightening ambiance for this film’s post-apocalyptic setting, and this really works during the quieter moments in the film’s second half. He also gives us some loud and dissonant cues, particularly in the film’s first half, used to drive the tension of the film; in many ways it reminded me of Jonny Greenwood’s score for There Will Be Blood. But it is INCREDIBLY overused in the film’s first half, to the point that it was headache inducing. As a result, a lot of the tension was just ruined for me, and I would’ve preferred more quiet and diagetic sounds to drive the tension and create a natural sense of horror. Instead, a lot of the music early in the film is just downright annoying, but does improve in the quieter climactic scenes.

FINAL THOUGHTS
The Rover has an intriguing story and an incredible central performance, and even has some wonderful direction with a real sense of grit. But the film’s lack of focus between character conflict and setting fails to create a building connection with the heart of the film, and it’s a head-scratching struggle waiting for that delivery in the film’s final minutes, a climax that truly does work.