Movie Review: ‘The Report’ never settles on how to tell its legitimately powerful story 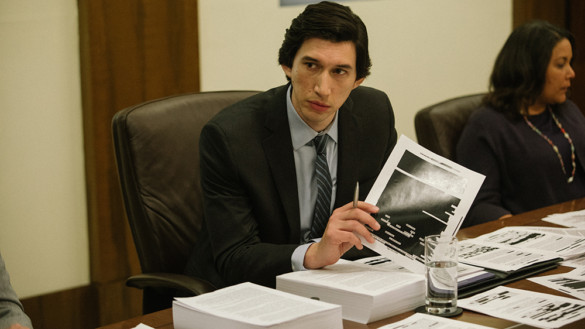 There will be a moment when you’re watching Scott Z. Burns’ new film The Report when you’ve simply had enough. For me, it came about the third time we see brutal torture depicted onscreen. I don’t mean to completely write off the film with that statement, because I do believe this is a strong film with a fantastic lead performance from Adam Driver. However, it’s also a film that commits a cardinal sin in my mind – it isn’t fully settled on the best way to tell its story.

Even from the film’s title, you realize that the artists behind the film want to take a creative approach to the subject matter. In trailers and promotional material for the film, the title appears as The Torture Report before the word “Torture” is blotted out in red ink – giving us the film’s actual title The Report. But torture will never be far from your mind as you watch this film. Burns makes that very clear with repeated scenes where we view the torture with each grotesque detail.

Some may view these scenes and find them not to be grotesque. These are the people the film seeks to unmask. Two characters in the film, in particular, feel exactly this way when they see the terrorists that are now in their custody. But what does torturing another human being – even one that has committed unconscionable crimes – really accomplish?

To get at this idea, the film follows the true story of Daniel J. Jones (Adam Driver), a Senate staffer tasked with investigating the CIA’s Detention and Interrogation Program and their post-9/11 tactics. Jones begins the film as an upstart government employee looking to break into the Washington bureaucracy. The first scene takes place in the office of Denis McDonough (Jon Hamm), a bit of foreshadowing to a later scene involving them both. McDonough encourages Jones to get some foreign policy experience in Washington. After we watch the reaction of government officials to the 9/11 terrorist attacks, the story jumps ahead to when Jones has been selected by Senator Diane Feinstein (Annette Bening) to investigate the CIA.

If it seems like a lot is happening in that paragraph, it’s because the film’s intro is absolutely jam-packed with information. It rushes through these important setup points and doesn’t really give us any strong connection to Jones. And this is where the film’s cardinal sin begins to take shape. If this is a movie about the work that Jones does, we need a better setup – pure and simple. We need to have a stronger identification with his character’s intentions rather than simply being told what his intentions are.

However, I’m not really convinced that this movie is about Jones’ work, at its heart. That’s because it repeatedly gives these detailed interludes where we watch as terrorists are tortured using the techniques that any of us who grew up in the shadow of 9/11 will remember all too well. These interludes absolutely flummoxed me. They are brutally vivid in their depiction of torture. I won’t say they are even in the top tier of most violent scenes that I’ve watched in a film, but they impacted me in a way that was especially harsh.

As I was considering my feelings about this, my mind drifted to the Best Picture winner Spotlight. That film tells another story of individuals who are dedicated to finding and uncovering the truth about disturbing events. The difference in that film is that the disturbing events are never shown on screen. We are either shown their aftermath, or we are told about them by the victims. Some might say that this goes against the “show don’t tell” storytelling rule, but I disagree. In thinking about how a reporter unearths a story, you have to consider that they don’t see the actual events either, they talk to people who can help them uncover the story. So when we see the victims telling us what happened, the movie is showing us rather than telling us. It is showing us the work of the reporters and the harrowing scars that are still portrayed in the faces of the victims. That is all we need to see, and if Spotlight had shown us actual scenes of abuse, it would have been a lesser film, in my opinion.

In the same way, Jones never sees actual torture, so why are we allowed to? This has the makings of an incredibly powerful film, but it is too self-indulgent. In some ways, I felt like the movie was looking down upon us as the audience. It’s as if we’re not expected to have attention spans long enough or deep enough insights to be able to stick with a film that delves into the work that is done in dark Senate offices. That is where Jones’ heroism took place.

Here I also have a quibble with the filmmaking. There were repeated moments where a lingering shot on Driver’s face would have given us an opportunity to consider the weight that was pressing down upon his character. Instead, we’re given quick cuts that gave me even more reason to think that the filmmakers doubted the attention spans of their audience. I want a film that trusts its audience, not one that looks down on it.

But enough of the bad, let’s get to why I think this is truly a good film. It begins with the incredible performance of Adam Driver. He has quickly risen to the foremost ranks among actors today, showing his ability to bolster large blockbusters and carry small indies with equal skill. Here he gives a performance brooding with the quiet rage inside Jones. This is a man consumed with the idea of justice, yet he sees so much injustice around him. With systems that are set up to keep him from bringing any kind of accountability to them, you can imagine that Jones might feel angry and frustrated. Yet he keeps working – an act of immeasurable hope. Driver brings all these qualities to the performance, and he makes the film what it is.

But that does not mean that all the plaudits should be reserved for him alone. The entire cast is fantastic, and this is quite the cast! Bening is great as Senator Feinstein, and other powerful supporting turns come from Hamm, Corey Stoll, Tim Blake Nelson, Ted Levine, Maura Tierney, and Douglas Hodge. It’s one of the strongest casts I’ve seen in a film this year.

The Bush administration is obviously pinpointed for its role in creating this massive scandal. But the Obama administration doesn’t come off very well in the film, either. The former may have created the horrible situation, but the film makes the case that the latter did not do enough to clean up the resulting mess.

Overall, the film gets us to consider the mindset that we had in the aftermath of 9/11. Were we just looking to retaliate for retaliation’s sake? Did we feel the need to do something and to have that “something” be as brutal as possible? The film makes the clear point that the driving force in these decisions was fear. Fear that a certain department would be held accountable for the terrorist attacks. Fear that another attack was coming. Fear that the answer would be interpreted as not having been harsh enough. When fear is the driving force, bad decisions are made.

As you’re watching this film, you may think of another similar film from recent memory – Kathryn Bigelow’s Zero Dark Thirty. This film wants you to make the connection so badly that it actually has the audacity to show a promo for the film on a television screen part way through the film. It reeked of superiority. It was almost as if this film wanted to say, “See? We handled torture right.” I’m not sure I would agree with that statement, even if I would agree that Zero Dark Thirty makes the mistake of depicting torture as having too much import in the search for Osama bin Laden.

Overall, I felt this was a film with a powerful story to tell. It just was never quite sure how to tell it. Still, you should watch this film for the performances alone, and the story that is told has just enough thematic heft to get you to consider the aftermath of 9/11 in a palpable way. I just think that a truly great film is hiding in there but is never quite allowed to reveal itself.