Movie Review: ‘The Reckoning’ is a Silly, Offensive and Tonally Botched Nightmare 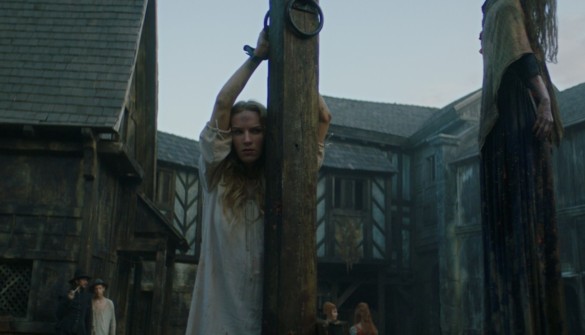 Synopsis: After losing her husband during the Great Plague, Grace Haverstock is unjustly accused of being a witch and placed in the custody of England’s most ruthless witch-hunter, Judge Moorcroft. Forced to endure physical and emotional torture while steadfastly maintaining her innocence, Grace faces her own inner demons as the devil himself starts to work his way into her mind.

Any film that has Sean Pertwee (Dog Soldiers) thundering down a muddy track as a witch-hunter should be a riot of a time. And while British director Neil Marshall does deliver exactly this in his latest horror film, The Reckoning still manages to be a dated, bruised and battered misfire in every conceivable way.

Many would have hoped that pulling back to smaller British scares would have rung the bell for a return to form for Marshall, but at this point, the director’s sensibilities are so far removed from whatever brilliant energy powered his early films, The Descent and Dog Soldiers, two of the most resilient British horror films of the last twenty years. Even his biggest defenders are going to struggle with this tiresome slog through a plague hit 17th century England, where rape, torture, and incineration are the common pastime.

Weirdly, Marshall’s film has come at the perfect moment, with its paranoia and corrupt justice systems, not to mention Marshall has angled his film towards female empowerment by placing his accused witch, Grace (Charlotte Kirk), at the center of it all, as she fights prejudice and male oppression all in the name of her own beliefs. The intentions might have been good, but the execution is not.

The film begins with an overblown, although quite enjoyable, rain and thunder prologue, which cuts between pre-plague Grace and her husband Joseph (Joe Anderson) to the morning after where Grace lugs a massive sword through the mud to cut his swinging body down – her husband has committed suicide to save Grace from catching the disease. It sets out Grace’s future predicament efficiently enough, but any emotion that might have been felt had we seen this romance develop in real-time, is firmly buried below ground.

Not long after this, Grace draws the attention of the local town squire Pendleton (Steven Waddington) an obnoxious, offensively dull role that never changes gears. With her husband out of the picture, his intention to rape Grace is made clear from the outset, so it’s nothing other than exhausting to sit through his timid threats of eviction if she doesn’t pay up. And we know that Grace obviously isn’t able to pay him off, leaving only one tasteless outcome. Grace escapes, forcing Pendleton to limp away and call for back up in the form of Moorcroft (Pertwee), the infamous witch-hunter who burned Grace’s mother alive several years ago. An old-age revenge plot ensues, sprinkled with a thinly written back and forth interrogation between Moorcroft, the overzealous accuser, and Grace, the defiled accused, with neither shifting their stances. It’s a rather pointless plot.

Marshall drags us from one joyless scene to the next: whippings, public humiliation, and inhumane devices designed for women only. There’s plenty of judgment preaching thrown about, demonic sex dreams, and riotous revenge, but it’s all so painfully performative. It’s a film that pretends to be in league with the devil and has all the halfway nastiness to lead you on, but the only scary thing here is Pertwee’s ludicrous mustache. The reliably great Pertwee himself is also horribly miscast, although the actor looks like he’s having fun, but that would make him the only one.

The film is scored to an overbearing violin screech, which makes you think it’s going to be a campy throwback to classic horror romps, but then you have dream sequences where Grace has sex with a winged Satan. There is also a narrative side diversion that ends in a head being obliterated by a horse cart. Any thematically interesting material descends into a hot mess of poorly conceived ideas and botched intentions.

The wickedest thing is the script, a hodgepodge of modern-day dialogue and full-blown religious damnation, the clearest distinction that The Reckoning has no idea what sort of film it wants to be. It doesn’t come together, and it doesn’t feel like the pieces of the film have been properly considered. To highlight how silly it appears on the screen, the moment the townsfolk turn on Grace amounts to nothing more than each extra whispering “Witch!” to themselves, echoed by the next person and so on, until everybody in the inn has shouted “Witch!”, wide-eyed and furious at a person they’ve never met. You can see what Marshall was going for, there’s a unique appeal considering everything we’ve been through this year, but it’s laughable to watch. Yes, this wild-fire mob suspicion is all part of the act of this period piece, but for all its frantic paranoia and witch hunts, The Reckoning has no intention of exploring its topical themes other than showing us that they are there, like turning up to a Halloween party with your sweet bucket but no costume.

There are several opportunities to explore interesting paths too, most notably with Moorcroft’s scarred assistant, Ursula (Suzanne Magowan), who he saved from a fire, but she’s reduced to an oddball character with a savage heart and tendency to stab people in the neck, only there as another extension of dumb violence in the name of being provocative. This might give the impression of The Reckoning as a whacky slice of 17th-century torture porn that you can enjoy and not take seriously, but the film is genuinely uninteresting. As for the bloody violence, Marshall never really commits to this either, often cutting to black – probably a blessing in disguise for a film that’s already a struggle to recommend to anyone.

The Reckoning is tonally confused, ill-conceived, and fails in fulfilling the basic needs of a horror film, neither provocative enough to work as campy grindhouse or serious enough in its history tale to play as a grounded exploration of the horrors of the 1600s. It’s an impossible film to take seriously.  As the old saying goes, the night is dark and full of terrors and Sean Pertwee’s fearsome mustache.