Movie Review: ‘The Public’ is inspiring and rewarding 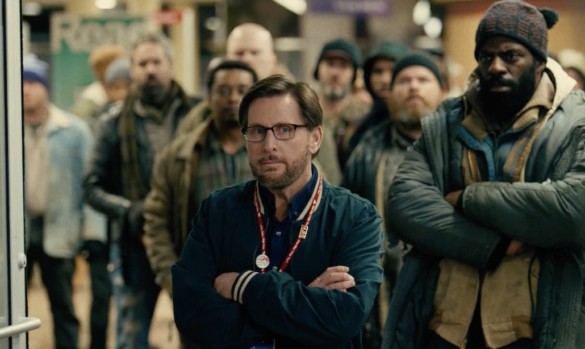 Synopsis: An act of civil disobedience turns into a standoff with police when homeless people in Cincinnati take over the public library to seek shelter from the bitter cold.

The Public is about the relationship between librarians and their patrons, specifically ones that are homeless. Before I saw this movie, I was unaware that public libraries were being used as makeshift homeless shelters during the day. People with nowhere else to go, especially when it’s cold, will go to the libraries to stay warm, have a good conversation, read, use the computers, etc. Then when the library closes, they leave, and are back waiting before the doors open in the morning. This is apparently a common occurrence in libraries all across the country, especially in areas with a large homeless population. This film does a beautiful job telling that story from all points of view; focusing mainly on the librarians and how this affects their job on a daily basis. The film takes place (and was mostly filmed) at The Public Library of Cincinnati and Hamilton County during a cold snap. In the beginning of the film they periodically show news clips about the extreme cold weather and about people on the streets dying of exposure. The cold and lack of shelter space leads a group of homeless patrons to stage a peaceful protest and refuse to leave the library at closing. The protest evolves into a standoff with police, political figures show up, library staff has to choose sides, and the media is scrambling trying to figure out what’s going on.

The film features strong performances from the lead and supporting cast. My favorites were Jena Malone, who plays a quirky librarian named Myra, and Michael Kenneth Williams who is a kind of spokesperson for the group of homeless men who refuse to leave the library. He does a great job providing comedic relief, as well as being the main point of view and storyteller for the homeless characters in the film. Emilio Estevez also does a good job as librarian Stuart Goodson. Goodson has a relationship with his homeless patrons and plays an integral role in the protest. This is not a subtle film, Estevez has the films messages out in the open, multiple times, in a variety of places. He is clear about his feelings about libraries being “the last bastion of democracy” and not to judge someone based on their social standing- even the title can have a double meaning within the movie.  Some critics have called the film a bit “preachy”, but I don’t feel it is.

Some negatives for me would be with the character development. This film is packed with good actors and interesting characters, but maybe it was too ambitious with the story to give them a chance to shine. I really liked Alec Baldwin as the police negotiator, he had a good backstory, but I wanted more. Christian Slater plays a jerk, I feel like that’s his go-to role now? I also wanted to learn more about the homeless patrons. We get to know a few of them, but I wanted more of their stories. The other character that was lacking was the library administrator/boss man Anderson (played by Jeffrey Wright). Wright is such a strong actor, and we didn’t get enough of him in this film.

I saw The Public at a local film festival (Alamo Drafthouse Lost Weekend XI) and was lucky enough to have a Q&A with writer/director Emilio Estevez after the showing. A big thing I took away from this film and the Q&A was there are no such thing as “homeless people”, there are people who are experiencing homelessness. There was an emphasis on making sure everyone, no matter their current situation, is seen as a human being, the same as everyone else. I believe the exact phrase I heard in the Q&A was they wanted this film to “celebrate humanity”. Emilio Estevez did a 30-city tour for the film at libraries, for homeless advocacy groups, and at film festivals. I enjoyed listening to him talk afterwards, he was obviously very passionate about the film and its subject matter. He talked about the 12-year process to get the film made, how he spent lots of time in libraries (incognito in a hoodie) for research and learning about the almost sacred relationship between librarians and their patrons.

Even with the flaws, I love this movie. It told a story I had no idea I needed to hear and inspired me to try and find a way to get more involved. It did a great job humanizing its characters. Librarians don’t just sit around and read books all day, and homeless people aren’t just crazy beggars like they’re portrayed in so many other films. It also doesn’t paint the other side – the police, politicians, media – as negative. It’s filled with strong, relevant messages while still being fun and watchable. It was one of my favorites of the film festival and I really hope others get a chance to support and love this film too.