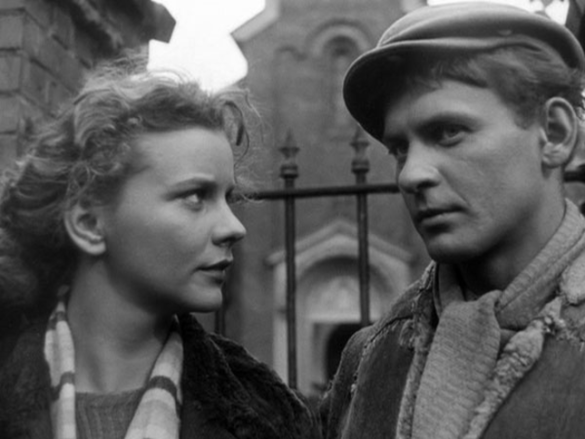 A survivor of the Polish occupation by the Nazis, Wajda recreated stories of the Resistance against their occupiers as his entrance into global cinema. His three movies – A Generation, Kanal, and Ashes And Diamonds – are the masterpieces of ground-level guerilla battles Wajda witnessed in his homeland. As Poland got out the grasp of Stalinism, more independence within the socialist thought was given, including a formal Polish film school. Wajda was one of its first graduates. He wrote the stories with surviving Resistance members and collaborated with his fellow directors from film school, notably Roman Polanski in A Generation. At a time of political autocracy, Wajda’s work was of Polish pride and slow transition from full communist propaganda to the more traditional style storytelling that pulled itself out of the political muck the country would be in until 1989.

A young man living in on the outskirts of Nazi-occupied Warsaw is lured into the underground resistance and meets a beautiful girl. He immediately has to balance the dangers of saving his family, the girl he likes, and his own neck with the perils of being chased down by the Nazis. For Poles in the factories, they have to make weapons for the Germans but find a way to foil their plans knowing sabotage was an automatic death sentence, as well as being a communist, the group of people who the resistance. The romanticism is short-lived and socialist realism is installed in the common tragedy that befalls for resistance members. The setting of Poland in World War II would be repeatedly visited by Wajda throughout his career, although his characters were more aware of their actions and the patriotism was toned down after this film.

Literally “Canal,” as in the sewers, the Warsaw Uprising in 1944 is in its final days as the Nazis begin to round up surrendering soldiers. A narrator and establishing shot shows us the dire scenario the people are in. The Soviets are waiting for the Uprising to end before they invade the rest of Poland to finish the rest of their planned annexation. Those who choose to fight on have no choice but to actually go underground and in the mud and shit to reach a safe area away from the Nazis. However, the sewers are a maze and the large group splits up in confusion, making it almost everyone for themselves. The legendary sewer chase scene in The Third Man was clean and big while Kanal presents the one-way exit as claustrophobic, smelly, and water up to their knees. Separately, there are love scenarios within the resistance and what they plan to do when they come out, hopefully, free and victorious from the sewers. When they reach an end, it is actually a dead end – literally. Again, the realism of trying to escape is enacted.

On the last day of World War II, a new conflict is about to begin between Polish exiles and the newly occupying Soviet troops. Maciek, a long-time resistance fighter who has to wear sunglasses outside because he’s spent so much time underground, emerges having failed to kill the new Soviet communist party secretary and to complete the job. By this point, Maciek has questioned whether or not to continue his fight, especially after meeting a barmaid who tells him that he could come out with a new life in a peaceful world. This was arguably Wajda’s finest film of his entire career as it was separated from the Soviet influence to give a character who was more freed from his convictions. It also provided a contrast in political views when we hear of Maciek’s surrogate father talk about his family’s right-wing support a decade earlier. The film’s title comes from a poem inscripted in a bombed out church Maciek and the barmaid find that symbolize the beauty that could come out of the war’s anger inflicted upon its survivors, especially Maciek.

Wajda was the first of a string of great Polish film directors followed by Roman Polanski and Krzysztof Kieslowski. His later work such as Promised Land, Man of Marble, Maids of Wilko, Danton, and Katyn reflect the Poland of past and what they were going through. Poland’s history has been attempted to be rewritten by people outside the nation and Wajda has been present to use his power, to tell the truth. Wajda’s War Trilogy was the first blows in his master to tell of Poland’s darkest time and the introduction to a new generation of Eastern European-based maestros.