Movie Review: ‘The Prodigy’ is trite and unmemorable 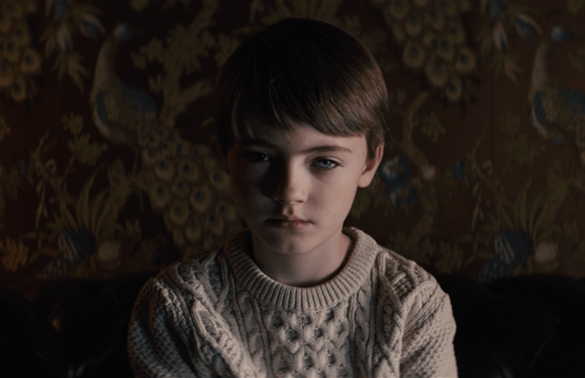 Synopsis: A mother concerned about her young son’s disturbing behavior thinks something supernatural may be affecting him.

The “creepy child” horror genre is nothing new, but it’s still an effective way to spice up a scary movie and give an entire auditorium full of people nightmares. The Prodigy pulls ideas from its successful predecessors while trying to inject new ideas in the film.

The Prodigy focuses on an eight-year-old boy, Miles, who is behaving strangely. He’s having violent outbursts, having weird dreams, talking in his sleep in weird languages, and just being generally creepy all the time. After a number of incidents his parents decide it’s time to get him checked out and see if Miles just needs therapy or there’s something more nefarious going on.

Jackson Robert Scott, who plays Miles, does a good job at portraying the creepy kid without being too cliché. I just hope he isn’t scarred for life for acting in this movie. He was believably disturbing and terrifying, and probably the best thing about the film. Taylor Schilling (known for Orange is the New Black) plays his mother, Sarah, also does an okay job but in the end, I didn’t really care what happened to her character. I spent most of the movie yelling at her for not realizing there was something seriously wrong with her kid. She was kind of a spaz or oblivious most of the time, I understand that a mom never wants to see the worst in her kid, but she was so in denial it was annoying. Her husband, played by Peter Mooney, was a much better judge of character but wasn’t around enough to be of use. The film mostly focuses on the relationship between Miles/Creepy Miles and his mother. Another decent character in the movie was one of the therapist characters, Arthur Jacobson (played by Colm Feore). He didn’t have a huge role in the film, but he had an important bit and it was done well.

Some positives for the movie were the score. Music is usually a big factor for me in horror movies and if it doesn’t work it ruins the whole film. Joseph Bishara, known for The Conjuring and Insidious series, did a good job setting the ominous and creepy tone for the film. I also liked that they tried something new with the “possessed kid” shtick. Without giving away the plot, it’s not a rip off of The Exorcist or other demon related horror movie. The only other time I’ve remember this kind of “possession” used or mentioned was in an episode of Criminal Minds, so it was a nice change. Another highpoint for me was a fellow theatergoer who happened to make loud comments about a cat on screen or when a character made a bad decision. Normally this would annoy me, but his perfectly timed “Kitty!” or “Uh Oh” while the rest of the theater was dead silent just added to the film.

This movie had a lot of negatives for me. One example was continuity issues. A prominent feature of Miles’ character is his heterochromia; he has one bright blue eye and one hazel. In many scenes it looked like Miles had two brown eyes. At first, I thought this might be a clever plot device or hint at if it’s good Miles or bad Miles, but it ended up either being bad editing, lighting, or a mix of the two. This movie was very dark, lots of running around the house at night without turning on any lights so it was hard to see what was going on at times. Side note – WHY do characters insist on saving electricity in a horror movie?!? Just turn the lights on people! It will save your life. Another negative for me was this had a lot of cliché horror bits in it. A dog that immediately senses that something is wrong, and no one pays attention to, annoyingly oblivious characters, and the film mostly relies on jump scares. Even the opening credits seemed like they were ripped off (or payed homage to) The Omen or The Exorcist with that drippy red font. The film really felt like a two-hour long episode of Criminal Minds with a paranormal twist.

Overall, The Prodigy wasn’t a bad film, but it wasn’t great either. It’s full of jump scares and tense moments, so it does its job as a horror movie. However, there isn’t any benefit to seeing it in a theater, and will be as satisfying at home should you decide to seek it out. I recommend it to fans of the genre who are just looking for something new to watch, but it’s nothing super special or memorable.