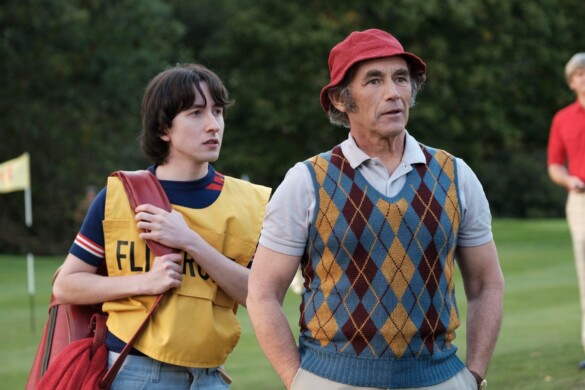 Synopsis: Maurice Flitcroft, a dreamer and unrelenting optimist, managed to gain entry to The British Open Golf Championship Qualifying in 1976 and subsequently shot the worst round in Open history, becoming a folk hero in the process.

Sweet, inspirational, relatively low-stakes sports films will always have a place in the movie landscape, from pop culture staples like Rudy and Hoosiers to more recent fare like Fighting With My Family and King Richard, the moviegoing public has always carved out a place in its heart for the underdog athlete. The latest entry in this storied subgenre is The Phantom of the Open, a warm hug of a film whose screenplay was written by the man who wrote just about the warmest hug of a film from the last decade, Paddington 2. The sweet, gentle sensibilities of that film ooze into every nook and cranny of The Phantom of the Open, creating a product that is almost always fun and entertaining, while also feeling traditional (and perhaps tired) enough to keep itself from greatness.

The film revolves around Maurice Flitcroft, a shipyard crane operator who, having barely played golf in his life, successfully applies to participate in the 1976 Open Championship. The only problem with him participating in Britain’s most illustrious tournament is that he is, at least in the context of the pros he finds himself playing with and against, inconceivably bad at golf. Flitcroft is played in the film by Mark Rylance, who remains one of the most interesting, captivating actors working. His performance in The Phantom of the Open is the film’s greatest asset, as his dry, distant demeanor adds an inherent, omnipresent level of humor to the whole affair. The light, jaunty tone of the film is magnified by Maurice’s obliviousness to the whole endeavor. He does not realize that he is not supposed to play in this tournament, at least in the eyes of the gatekeepers trying to keep the game accessible only to a certain kind of person.

It is this “snobs versus slobs” conflict that makes it impossible not to root for Flitcroft and his family. You can understand why someone would be annoyed with this neophyte falling through the cracks and slowing down the quality and pace of play at a tournament this big and important, but the sniveling, judgmental elitists that look down on him more for his social status than his golf game are broadly unappealing enough to root against them at every turn. As effective as that breadth is when it comes to painting a villain, though, all of our “good guys”, outside of Maurice, are similarly thin, which drags the movie down whenever Rylance isn’t on the screen. Most underserved in the film is the great Sally Hawkins, who plays Maurice’s wife. Her character is incredibly perfunctory, used almost exclusively as a way to move the plot forward or react to Maurice’s antics. Sadly, the thinly-drawn wife character has become as much a staple of these types of films as the training montage.

The Phantom of the Open is directed by Craig Roberts, who most would recognize from his acting roles in movies like Submarine, 22 Jump Street, and Neighbors. Roberts brings a level of craftsmanship that you usually wouldn’t expect from a film like this. He, along with cinematographer Kit Fraser, manages to create a great deal of striking images that capture Maurice’s sense of being trapped by expectations and his desire to stand out from the crowd. The film’s editing and score are always lively enough to keep the rote story mechanics from feeling entirely stale, smartly mixing in snappy montages as well as scenes that really breathe and allow Rylance to show off his experience as a masterful stage performer. His ability to  make his inherently goofy character feel so full of human desire and raw emotion is a testament to his greatness and uniqueness as a performer. He is making bold choices as Maurice and they all pay off.

It is pretty much impossible to argue that The Phantom of the Open will sustain the public consciousness as some sort of unsung masterpiece, but as a populist piece of family entertainment, it more than does its job. There is much joy to be found in the familial bonds found between the members of the Flintcroft family and the growth achieved by Maurice’s eldest son, Michael, who learns to embrace his blue collar family and care less about what others think about him. The Phantom of the Open recommends embracing your oddities and defying expectations. The one trick that this film plays in comparison to the films that you could easily compare it to, is that Maurice never becomes a good golfer. He is an underdog in that he isn’t supposed to be anywhere near professional golf to begin with. The idea of winning is never even considered. When the gold establishment turns its nose up at him, it only encourages him to become a hilarious trickster, aggravating them at any and every turn. Mark Rylance captures the joy of playfully prodding those who look down on him with a great deal of whimsy and really emphasizes just how committed Maurice is to everything he does. It is Rylance’s effort that props The Phantom of the Open up. You have seen films like this many times before, but the little details separate it from the pack.